This week the government trumpeted the opening of 55 free schools. But the success of the movement is being stymied by a lack of suitable sites, and with a further 114 schools approved for next year, the problem is set to get worse 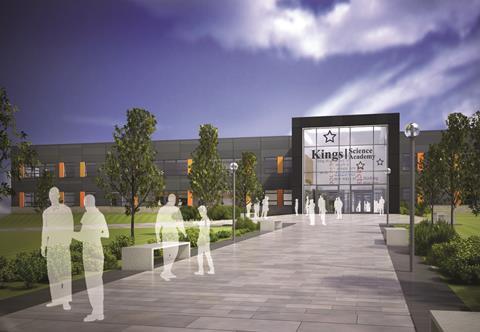 Michael Gove, the education secretary, was positively beaming when he announced the opening of 55 new free schools this week. What he didn’t mention, however, is the 24 schools that were approved to open this week, but didn’t - largely because of troubles securing sites. Indeed, such are the difficulties the Department for Education (DfE) is having in finding premises for the free schools - Gove’s pet project - it has taken to advertising in the property press. Meanwhile others are calling for the government to rethink the way it is going about the whole process.

Twenty-four free schools opened last autumn and 79 were approved to open from this September. However, the DfE said only 55 opened this week - a figure that includes schools approved last year. According to an investigation published by the Times last week, many of the approved schools that are not opening this September have been stymied by difficulties finding sites and the tight turn around between approval and opening. Others have been hit by planning problems or had their funding withdrawn by the DfE.

Of the 55 set to open, 26 were not yet in their permanent location, while at least four others are housed in temporary accommodation on their permanent site. And while the programme does not have the scale of the previous government’s Building Schools for the Future programme, neither is its success insignificant for contractors: the DfE has previously estimated the capital costs for the 24 free schools that opened in September 2011 would be up to £130m.

Louise Allanach, project director at EC Harris, agrees the problems free schools are having finding sites has now become acute. This, she says, is due less to planning issues than simply identifying and securing sites, which is particularly pressing in London.

‘There are tight time constraints and value for money demands’, John Keyes at DTZ

Allanach says free school groups and the DfE need to be more creative and flexible in their thinking around what buildings could work as a free school, citing the example of King’s Science Academy in Bradford, which opened in September 2011 and is using the steel frame structure of an old industrial warehouse as the basis of its permanent building for this year.

“We are seeing groups look at different options such as converting empty office space and warehouses into schools. Free school groups who take a more innovative approach to their premises needs can resolve these headaches without having to make do with temporary sites,” Allanach says.
She says free schools need to start working much earlier in the process to identify a site - but says this is not easy under the current system, where free school groups can begin to identify sites or premises that could be used for their school, but are unable to take this process on until their application for the school has been approved by the DfE.

Property firms DTZ and Jones Lang LaSalle (JLL) have been appointed to a framework agreement by DfE’s schools capital body Education Funding Agency to secure the premises on behalf of the free school groups. Allanach says that with the increasing number of free schools being approved - a further 114 have been approved for opening from September next year and beyond - the current arrangements are now feeling the strain. “I think there is a capacity issue there [at DTZ and JLL] now so there may need to be some changes,” she says.

John Keyes, DTZ’s director of corporate real estate consulting, denies there is a capacity problem and says DTZ, alongside JLL, have enough resources to secure the premises required. But he says there are significant hurdles to overcome in identifying appropriate premises for free schools, with sites identified by school groups not always suitable for a school, and some not able to secure premises in the tight timeframe required. Other sites may not be available at a price that comes within the Treasury’s guidelines. “There are tight time constraints and value for money demands,” he says. “Additionally, you have a constrained area, as you can’t go too far beyond the free school group’s local area,” he says.

In a sign of how difficult it is to find sites, DTZ, with the schools capital body the Education Funding Agency (EFA), has now begun an advertising campaign in the property press targeting commercial property owners (see inset, above). “We are trying to raise awareness and get the message across that there is this demand for properties,” he says.

The problem is so bad that Rachel Wolf, director of the New Schools Network, the charity charged by the government with delivering its free schools programme, has called for the government to rethink the entire process it has in place for finding premises for free schools. She says the current system is “no longer fit for purpose”, with the sheer amount of schools receiving approval overwhelming the ability of the DTZ and JLL to find and purchase sites.

“It is a positive move that they are using the property press to advertise for sites and get the message out there to different kinds of property owners,” she says. “But that does demonstrate the extent of the problem. The DfE does need to change things as the programme grows.”
Wolf says the government needs to engage property owners with large land banks and should allow free school groups to use local property firms to help them find premises, rather than relying solely on DTZ or JLL. Proceedings to buy premises should begin at a much earlier stage - even before a free school’s application is approved, she adds.

“The government should be identifying where the need is - especially in London where it is greatest - and buying up premises or sites that could then be bid out to free school groups.” she says. “This way there would be a pipeline of premises that could serve the growing demand.”
Until at least some of these concerns are met it looks unlikely the free schools movement will take off.

Obtaining a site or premises for a free school is the first hurdle free school groups face - the next is refurbishing the chosen building - or in some cases constructing a building.

To date the DfE has published little detail on the capital costs of new free schools. But an analysis by Building of costs published for nine schools (below) shows a huge variation - something Sebastian James’ review of education capital said should be avoided to cut the overall costs of school capital spending.

Simon Lucas, EC Harris head of education, says while the sample is small, the variation in costs is “massive”, ranging from the “incredibly high” cost of Eden Primary School to others that are much lower. He says this will make it difficult for DfE to produce cost benchmarking for free schools, making predictions of future capital costs problematic.

“They are going to want to continue to encourage the innovative use of different kinds of buildings as there is a shortage of sites and that’s what leads to these massive variations,” he says. “So I really don’t see how they will be able to undertake any cost benchmarking.”

Darren Talbot, Davis Langdon head of schools, says the costs conform to the rule that smaller is more expensive, which raises questions about whether spending capital resources on small schools in difficult to convert buildings is the best use of scarce resources. “I think that is a debate that should be had,” he adds. 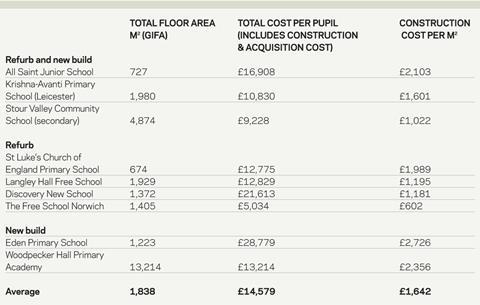