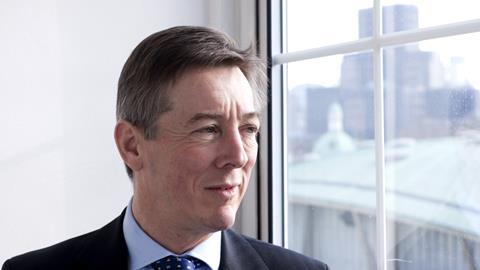 By his own admission, Michael Woodhead had “absolutely no knowledge” of the energy sector two-and-a-half years ago. The managing director of power and gas firm E.ON UK’s sustainable energy division is also completely honest about the fact that sustainability hasn’t always been at the top of his list of priorities: “It would be wrong to say that it has always been on my radar. For a start, it hasn’t always been so high up on the agenda generally.”

But that was then. Nowadays sustainability is not just on the agenda, it is pretty much at the top of it and it has certainly moved up Woodhead’s own list. As his job title suggests, he is now charged with leading the development of the dedicated sustainability arm of one of the biggest power suppliers in the UK. Oh, and he’s substantially upped his knowledge of the energy sector since joining E.ON from Mitie in 2009.

Woodhead says he expects “exceptional growth” in his division between now and 2020, and a four-fold increase in turnover fourfold within the next five years. To do that he’ll need help, and lots of it, from the construction industry.

Ahead of Ecobuild, the world’s largest event for sustainable design and construction, where E.ON will have the biggest stand, Woodhead talks about the firm’s growth plans and reveals what impresses him as he looks to build up construction partnerships to take on its steadily increasing workload.

As the second largest electricity provider in the UK, and part of global giant E.ON Group, which employs nearly 80,000 people worldwide, E.ON UK is in a position to make a real difference when it comes to promoting and providing sustainable energy. And that’s the raison d’être of 55-year-old Woodhead’s division, which has been up and running since 2007. The firm was named as one of the UK’s most sustainable power providers in 2011 by independent analyst Verdantix, along with EDF, Centrica and RWE Npower. And Woodhead reckons that by operating and maintaining 19 onshore wind farms, two offshore wind farms, one hydroelectric power station and 13 combined heat and power sites, E.ON’s name should be at the top of that elite group: “We are not the only energy provider looking at sustainability to this degree,” he says. “But there is no doubt we are leading the sector in certain areas at the moment, and I hope that, as a client, that’s part of our reputation. Certainly when I joined the company I looked at what other utilities companies were doing and felt that E.ON had a much more proactive approach to changing energy provision than the others.”

So what how is he planning to stay on top of the sustainability agenda? Woodhead points to the four areas of focus within the division: community energy, microgeneration, carbon consulting and infrastructure - all of which will create opportunities for construction firms as they grow and develop.

Community energy is energy produced locally rather than at a large plant elsewhere and sent through the National Grid, thus generating lower carbon emissions. This creates huge opportunities for housebuilders, social landlords, developers and building consortiums to achieve carbon targets, and E.ON plans to up customer numbers in this sector from 2,000 to 120,000 by 2020. Woodhead says the firm already has work secured in the pipeline that will increase numbers to 15,000 over the next 12 months.

“We have 25 projects like this due to start in the next two years alone, which will not only help the construction industry meet low carbon targets, but will create work, as we need to set up key pipelines to transport heat from a heat source to a city and then more to siphon heat off for housing. We’ll be creating a new infrastructure system.”
Next on the list is microgeneration, such as solar thermal, photovoltaics and ground-source heat pumps. Here, E.ON works closely with local councils. Woodhead says: “By the time the feed-in tariff was first changed back in December, we had installed solar PV on 2,500 homes. We are hoping that, by the end of March, we will have installed solar PV on 4,000.”

Then there is the firm’s consultancy area, which was set up two years ago with a view to looking at carbon reduction commitments in the commercial sector. Woodhead points out that, along the line, he expects this part of E.ON’s work to have a positive knock-on effect for the construction industry as well as the environment, as the group will be advising on how capital works can be funded through energy savings.

And finally, infrastructure - which, among other things, sees E.ON lead the development of low-carbon LED streetlights in the UK and work closely with local authorities on the installation of highways and public space lighting.

Woodhead says that underpinning all of these focus areas is E.ON’s Sustainable Cities - a more aspirational plan involving talking with individual cities and looking at creating an entirely sustainable approach to the way they are run. “This should be up there with housing and transport policy,” he says. “We have already signed up city partnership arrangements with Exeter, Milton Keynes, Nottingham, Sheffield and Stoke-on-Trent.”

The result of the Sustainable Cities plan, and indeed much of E.ON’s pipeline of projects, will be an inordinate amount of construction work. And the good news is that the door is very much wide open.

“Our growth as a division is going to be huge,” reiterates Woodhead. “And we are only going to be able to achieve that growth if we have relationships with contractors and construction in place to take forward.”

So what’s this particular client looking for from its supply chain? Apart from the expected criteria - strong financials, a good track record in sustainable construction - Woodhead wants to join forces with construction firms who understand long-term relationships, as these are becoming increasingly prevalent in his world. This doubles up well with the construction industry, he says. “There is a feeling, quite rightly, that constructors are going to be building up longer-term relationships with clients, and that’s where we have a really common agenda.

“We have a very relaxed approach to wanting to work with people as long as they want to work in partnership. What I am trying to build up is the idea of a much longer-term approach to relationships. I am not really interested in having a subcontractor working with us for a short period of time and us and them coming to blows because we can’t work together, and parting ways. To me, that’s an absolute failure and not what I am looking for.”

Well, that seems to be clear enough. All the construction industry has to do is get out there and win the work.

If you want to find out more about E.ON or any of its upcoming projects, visit the firm’s stand at EcoBuild