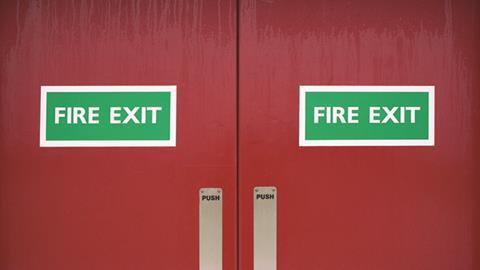 Incorrectly specified fire doors could, at worst, cost lives. Now a landmark legal case could mean that it’s the contractor and specifier who will end up in court.

At the end of last year Christopher Morris, a fire system maintenance contractor paid out £11,000 in fines and costs for failing to look after a fire detection and alarm system at a care home in Manchester. Earlier in 2010 a fire had broken out in the home and an elderly lady died of smoke inhalation. Although Morris wasn’t guilty of causing the pensioner’s death a subsequent investigation revealed Morris’ failure to look after the alarm system was a breach of the Regulatory Reform Order, which requires building owners to ensure their properties comply with fire safety legislation.

This case was significant because it was the first time a contractor had been prosecuted under the Regulatory Reform Order (RRO) rather than the building owner. Owners are already paying out big fines under the RRO, for example fines totalling £1m were dished out last year in London alone.

The RRO obliges building owners to carry out annual out risk assessments on their premises including ensuring that fire and escape doors are up to scratch, have the correct hardware fitted and are appropriately maintained. They must also be able to produce the documentation showing the products are suitable for their application. The Morris case demonstrates that contractors and specifiers are at risk of prosecution if they get it wrong so the pressure is on to make sure fire doors are correctly specified and maintained.

The role of fire doors

Fire doors are covered by Part B of the Building Regulations covering fire safety. These refer to the complete door installation so fire doors must be tested as a complete assembly that includes the frame, seals, hardware and glazing. This ensures it will do its job of compartmentalising the building in the event of fire. Fire doors are currently tested to BS476 part 22 or EN1634, and then given a rating according to how long they withstood the fire without penetration. Fire doors are given a rating based on how long they can maintain their integrity in a fire, ratings rang from 30 minutes to 120 minutes.

Following the test, the accredited certification body produces a certificate and data sheet that shows what components can be used with the door leaf. If any component is changed, the whole door loses its certification.

There are fire doors available to suit a wide range of applications and styles. The vast majority of fire doors in the UK are timber with steel doors generally specified for industrial settings.

New doors come preinstalled with intumescent seals that swell up and seal the door in the event of a fire. Older doors can have seals retrofitted, but this can seldom be done safely.

Glazing panels have a major impact on the fire integrity of the door since they represent a substantial opening in the door leaf. Part B sets out the size, position, shape, glass type and beading required.

Correctly specified, fitted and maintained hardware plays a vital part in the effectiveness of fire doors. Hinges, seals, handles and closing devices make fire doors operate easily during normal use and save lives in the event of fire.

The following items are vital to the fire resistance performance of the fire door:

Handles, knobs, spy holes, letterplates and the like are not essential for a door’s fire resistance but must be fitted in exact accordance with the door’s test evidence.
The Door and Hardware Federation and the Guild of Architectural Ironmongers cooperated in the production of a Code of Practice covering hardware for fire and escape doors, which offers advice on relevant products and standards to guide those responsible for fire safety in buildings. It can be downloaded at www.firecode.org.uk

Following a vote in the European Parliament in January ratifying the new Construction Products Regulations, it will become mandatory for fire and escape route doorsets to be CE marked, if they fall within the scope of a published harmonised standard, from July 2013.

Most specifiers traditionally prefer to use the services of an architectural ironmonger to schedule individual doors assemblies including the door, frame and associated hardware. This optimises choice in design and performance, and can often be more cost effective. The components may arrive from several sources to be assembled on site. Such an assembly will not be required to be CE marked although individual hardware components should still be CE marked.

Doors and associated hardware doors must comply with all the relevant standards including CE marking where appropriate. This is one of the key ways that specifiers can minimise risk of prosecution under the RRO should a fire occur. It is vital not to accept products at face value, and to check supporting Declarations of Conformity, taking care to ensure that they are correct and appropriate for the selected products. An appropriate CE mark can give legal protection for everybody in the specification chain because it provides evidence of proper materials being used, a product that is fit for purpose, and that due diligence has been exercised in the selection of the product.

Building would like to thank the Guild of Architectural Ironmongers for their help in preparing this article.