Fit towns: A Walk on the Wild Side 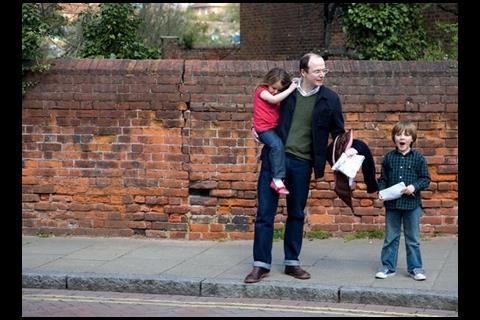 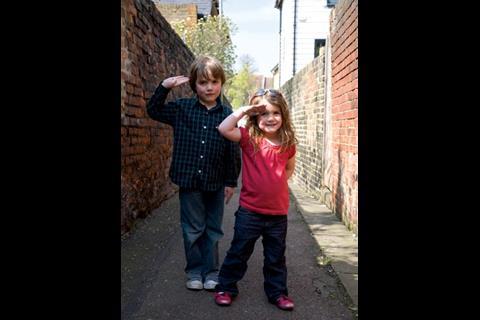 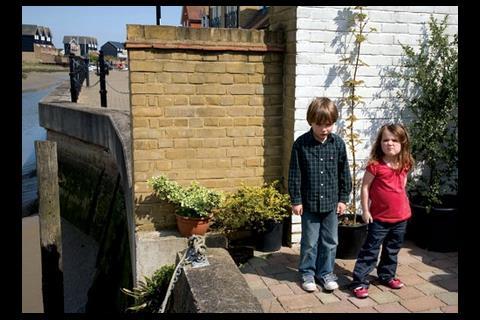 Faversham Creek where the path is blocked by brickwork 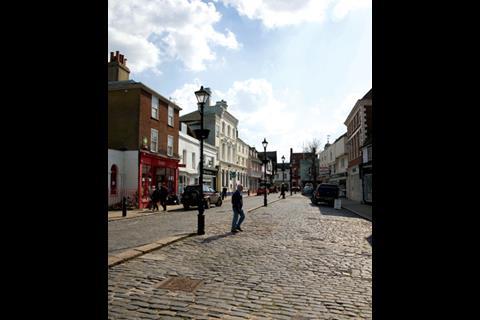 Market Street, which is an example of good urban design – the road surface is lowered and drivers are emboldened to get out of their cars 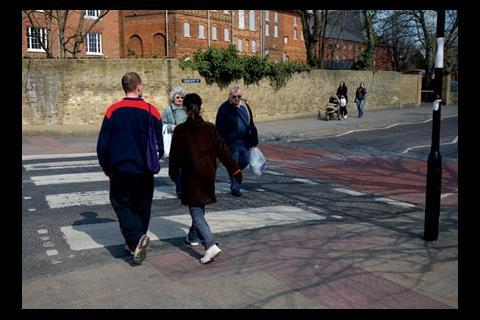 The “friendliest zebra-crossing in the world”. 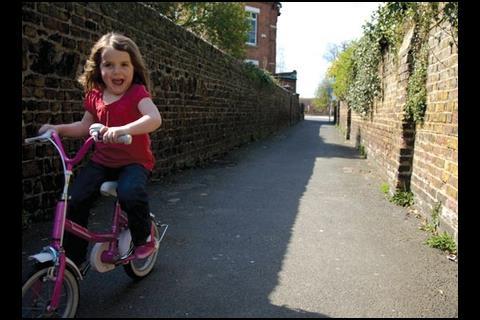 Katherine cycles through “poo alley” – “better than walking through it”, says her dad. 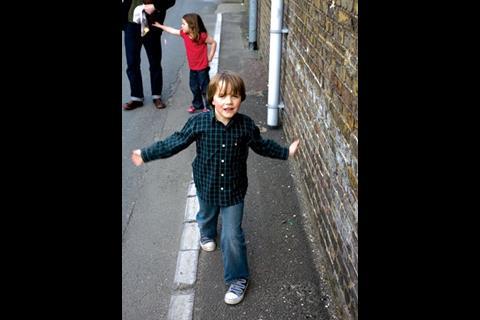 George shows the inadequate width of the pavement; pedestrians must walk in single file.

It might sound a bit off the wall, but this urban designer and his family believe town planning can help us stay healthy. Katie Puckett went for an amble with them to find out how

Tim Stonor and his children are standing on the verge of a traffic junction in the historic Kent town of Faversham. It’s an idyllic scene – as junctions go – with Faversham Creek rippling past and a family of ducks ambling across the grass in the spring sunshine. But local resident Stonor is not happy. As an urban designer who is trying to get people to take more physical exercise, this is exactly what he doesn’t want to see.

“This junction has been designed for the benefit of cars. At 8.30am it is teeming with kids trying to get to school but there’s nowhere to cross the road.” Neither is there a bench, although this would be a lovely place to sit. “Part of the health agenda is to encourage people to be as active for as much of their lives as possible. If you’re old or infirm, you want a bench to take a little rest.”

Faversham is not alone in attracting Stonor’s ire. The unfashionable discipline of town planning is suddenly big news in Britain’s fight against flab. Just under a quarter of the UK’s adults are now estimated to be obese, a trend caused by their sedentary lifestyles and calorific diets.

Designing environments and buildings that make walking more attractive is one of many weapons the Department of Health has promised to deploy as part of its £372m obesity strategy, launched in January. It set aside £30m for research into creating “healthy towns”, and Alan Johnson, the health minister, wants the government’s 15 proposed eco-towns to incorporate healthy town principles, based on best practice from around the world.

Johnson called in Stonor to help him tackle the problem. As managing director of Space Syntax, Stonor was part of a panel of health, planning and transport experts convened by the National Institute for Health and Clinical Excellence (Nice) in 2006. The body, more commonly known for its pronouncements on new drugs than forays into town planning, produced guidance in January on how urban designers can help us all slim down.

And it’s not such a great leap. Stonor says the resulting guidance doesn’t call for a wholesale rethink of town or building design – just a bit more care. The panel recommends that planners consult health experts regularly, prioritise pedestrians and consider how to make places enjoyable to walk around.

One of the best ways of creating mixed communities of users is getting everything exactly the right speed.

Usually Space Syntax uses simulation software to show clients how their buildings will work. Today, though, we are going to put an urban environment to a much tougher test: it will not only receive Stonor’s own verdict, but those of his two children – worldly vegetarian George, seven, and his four-year-old sister Katherine.

We start in Havisham’s Coffee House next to the market square. Over tea and cake, Stonor outlines the principles of designing for pedestrians. “‘Peds’, as they’re called, are always thought of as automatons, but they don’t do what you want them to. What people like most is convenience and having things in the right place, in their desire lines. That’s why you get tracks across landscaped gardens – because they’re not in the right place.”

Faversham’s main drag, our first stop on the tour, is an example of how to do it right. On Market Street, there is a clearly marked crossing but pedestrians seem to feel emboldened to cross wherever is convenient. The road surface is lowered but not by much, and the crossing point is marked by a “table” – a raised area bounded by bands of grey cobbles – which function as a more genteel version of speed bumps. The more confident pedestrians feel, the more likely they are to get out of their cars.

“One of the best ways of creating mixed communities of users is getting everything exactly the right speed. Twenty miles per hour is a good limit in the town centre. These ladies” – he points towards two white-haired women driving past – “can drive in, park and pick stuff up, and my kids can cope with the traffic.” Indeed, George and Katherine seem totally unfazed, running around the wide pavement but never straying onto the road.

We approach what Stonor describes as “the friendliest zebra crossing in the world”. “People always stop. People almost ring you up to ask if you’re thinking of crossing. I don’t know why – probably because of the really good sight lines.”

Unfortunately, as you walk away from the town centre, the provision worsens. We cross Quay Lane, another popular route home for residents, but here there is no crossing. “There should be a consistent level of pedestrian infrastructure, regardless of whether there’s a bus stop or not,” says Stonor.

If you can’t stop, you can’t transact socially or
economically and places don’t have value.

Smack Alley – named after a type of boat rather than the opiate – is another well-used cut-through, but the quality of lighting and surfacing is poor. There are three streetlights, but they’re the standard-issue highway model, and tower above the lane. At least they’re white, which is essential for facial recognition, but Stonor says people should be lit from below: “Lit from the top, everyone becomes a hoodie.”

George has requested we go to Faversham Creek, a tidal spur of the Thames Estuary. It’s a gravel-surfaced development of restaurants, offices and housing by the water, with brick cottages and a weeping willow on the opposite bank. But there’s a flaw. We’d like to walk along the river but in one direction the path disappears and on the other, it’s blocked by a stub of brickwork. “I wish there was a path along the water, don’t you?” says George. “It’s not big bits of infrastructure we need, just a little bit of consideration,” adds Stonor.

As we turn to head back to town along the road, there’s another disappointment. The pavement is wide enough only for us to walk in single file. “You should be able to walk hand in hand with a child,” says Stonor.

The Nice guidance recommends that pedestrians take priority over all other road users. Actually, it’s already a tenet of planning guidance but is frequently flouted. For example, where Napleton Road meets the busy South Road, it’s mouth widens dramatically, like an estuary – ideal for turning cars, but dangerous for the people who cross it. Pedestrians are supposed to walk a little way down Napleton Street to cross, but you can see from the worn patches in the verge that many take their chance with the traffic.

The final stop on our walking tour is a shortcut known, to Stonor and his friends, only as “Poo Alley”, a 150m stretch linking the main road to the swimming pool and the town centre. “Watch where you’re walking,” he advises. The tarmac is poor and the lighting sparse and badly maintained. It would also benefit from the installation of dog waste bins. The result: one of Stonor’s friends drives her daughter the five minutes to the pool rather than brave the alley.

It’s considerations such as these that led Norman Foster to turn to Space Syntax when completing the pedestrianisation of Trafalgar Square, and it’s why the firm has been given a role in untangling the spaghetti of dingy underpasses and roundabouts in Elephant & Castle, south London. “When we did Trafalgar Square, people asked how much more quickly they’d be able to get across. We said it might take them another hour – because they might stop to eat their lunch. If you can’t stop, you can’t transact socially or economically and places don’t have value.”

Afterwards, over a pint of local ale in a child-friendly beer garden, Stonor considers the government’s proposals to make eco-towns into healthy towns. “A lot of professionals just don’t realise their actions can have consequences on health. Current planning policy prioritises safety, and the idea that we’ve got to create safe environments, but nobody’s been thinking about activity. Faversham isn’t a bad place. A couple of crossings might make all the difference.”

How do you get them walking?

"I’m thinking about this all the time. In urban design terms, it boils down to creating a good layout with a high number of connections to encourage people to walk, and sprinkling land uses around a development. Many of the 15 proposed eco-towns are located in the countryside or the outskirts of developments. If people live 15 miles away from where they work, they still need to get into the car. The kneejerk reaction is to get rid of cars but that can restrict a place. If you restrict access to shops, they become less viable. Urban designers are the mediators between the different professions, like highway engineers and landscape architects. We have to strike a balance."

"This is something I’ve become a lot more aware of over the past two or three years. It’s all very well creating fabulous landmark buildings but it’s the spaces between them where interaction happens. It’s a continuing battle to convince developers they’re not going to lose value and make sure they’re allowing reasonable spaces for people to do different activities between the buildings. We need to create safe environments where there’s some kind of natural surveillance so someone can open their door and let their kids out rather than worrying about dark alleys. There is planning guidance on the quality of amenity space but the problem is taking it beyond statutory requirements."

"It’s certainly something we should be thinking about. There’s a lot of fit between healthy lifestyles and climate change. If we could encourage people to walk and cycle where they currently use their cars it would make places more healthy and use less carbon dioxide. We’re also looking at food production, which is linked to wellbeing and CO2 emissions, as food travels hundreds of miles. It can work on various levels, with farms close to developments or people producing their own food on allotments. Allotments tick a lot of boxes at the moment."

Original print headline 'A Walk on the Wild Side'