Building goes on the trail of the ITER - a £12.5bn multinational project that might just save the world … 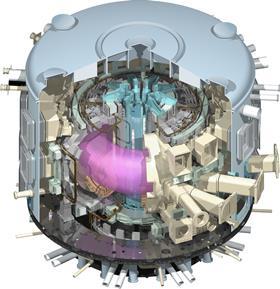 “There isn’t a temperature gradient like this anywhere else in the universe,” says Peter Sedgwick, design manager of consultant Atkins. Sedgwick is on the team responsible for planet earth’s ultimate scientific and construction challenge. In the middle of the French countryside, they are building the world’s first commercial-sized nuclear fusion reactor - a building that will simultaneously be the hottest and one of the coldest places on Earth. “The temperatures in the middle are 10 times hotter than the sun but 4m away this drops to -269ºC,”
says Sedgwick.

Worth €15bn (£12.5bn), this is one of Europe’s biggest engineering jobs and, if successful, will render discussions about the merits of renewable technologies, fossil fuels and conventional nuclear power obsolete.

Nuclear fusion is often described as the holy grail of energy production, and with good reason. Conventional nuclear power stations work by splitting uranium atoms, a process that releases huge amounts of energy. This process, called fission, has a multitude of disadvantages: it generates highly radioactive waste that takes thousands of years to decay, supplies of uranium are limited, and if safety systems fail the nuclear reaction can run out of control, leading to meltdown, as was so graphically demonstrated at Fukishima in Japan last year.

Nuclear fusion, on the other hand, has none of these disadvantages. It works by fusing two isotopes of hydrogen, one that is found in seawater and the other found in lithium, an abundant metal. Like fission this generates huge amounts of energy. Waste is far less of an issue: fusion generates helium, a harmless gas, and a tiny amount of mildly radioactive ash, which is dangerous for decades rather than millennia. Fusion is inherently safe as all the systems in the reactor are designed to maintain the reaction rather than to prevent it from running out of control. If anything goes wrong, the reaction will stop instantly.

As with most holy grails, it is not quite as simple as that. Getting those two isotopes to fuse requires temperatures of 150 million ºC. The challenge is how to generate and maintain these temperatures and harness the energy given off by the fusion reaction using earthly materials and technology. 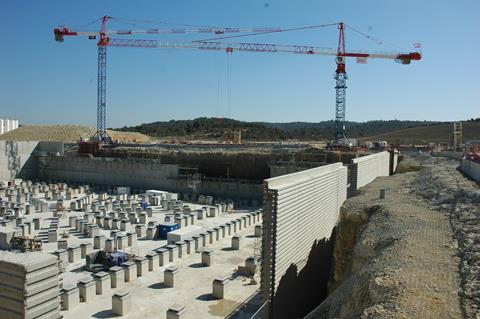 A 15m deep hole has been blasted into the French countryside for the tokamak building. The base slab will sit on 493 concrete plinths featuring seismic bearings that protect the tokamak in the event of an earthquake 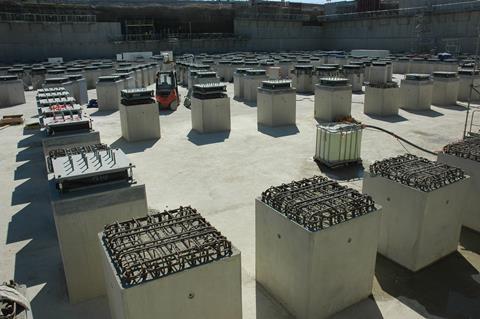 Nobody in their right mind would blow €15bn on a full-size nuclear fusion reactor if they didn’t believe it was going to work. Nuclear fusion has been achieved here on earth, in a facility called JET in the UK. Unfortunately, it required more energy to make it work than it produced, rendering it useless as a power source. This new project, called ITER (originally an acronym of International Thermonuclear Experimental Reactor), aims to rebalance this equation. “The goal of this experiment is to put 50mW of power in to get 500mW out,” explains Sedgwick’s Atkins colleague, project director Christophe Junillon.

Atkins is part of a consortium called Engage, which is responsible for the design and procurement and supervision of the construction of the project. The job is made even more complex by the need to manage the seven countries funding the project (see box overleaf). Seven sections of the vacuum vessel inside the tokamak - the fusion reactor - will be made in Italy and two in Korea. This vessel will include 14km of welded joints which have to be impeccably done. Huge magnets are being made on site, but two will be made in Russia. All elements will have to conform to the French nuclear regulator’s safety standards. 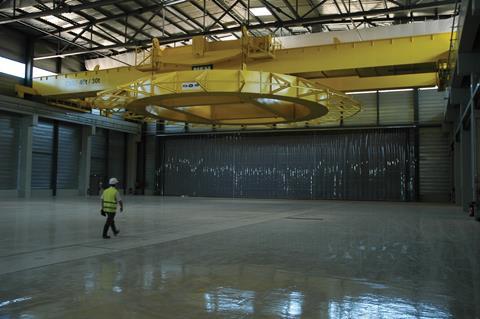 A factory has been constructed to make the poloidal field coils that will ring the vacuum vessel. This crane will be used to build up the 25m diameter magnets

The complex mechanical and engineering systems needed to make the reactor work have been broken down into 30 packages. There is a package for the cable trays, another for the cooling water needed to keep the reactor cool and others including the helium needed to cool magnets inside the reactor to -269ºC. These packages are being designed by teams all over the world. “The building is stuffed with process equipment which is still in the preliminary design phase,” explains Sedgwick. “We are trying to establish how it all fits together.”

It is the job of Engage to design and construct buildings to accommodate these still-developing processes, and to make sure there aren’t any clashes on site. “It’s a matter of drilling in the message to all these people working all over the world to be aware of the issue of clashes and simplifying the design where possible,” explains Sedgwick.

Engage is also responsible for realising the project, which means keeping it moving at a cracking pace. “We have encouraged people to make decisions even though they would prefer to wait another year,” adds Sedgwick. “The project has moved in the last year from a gleam in someone’s eye to something real.”

The “real” is a site 1km long and 0.5km wide in Provence. Work began in October 2010 on the tokamak building. A 15m-deep hole has been blasted out of the limestone rock and the 1.5m-thick base slab poured. Retaining walls are under construction and 400 of the 493 plinths supporting the slab forming the base of the tokamak have been finished. Each plinth supports a seismic bearing that protects the tokamak in the event of an earthquake. 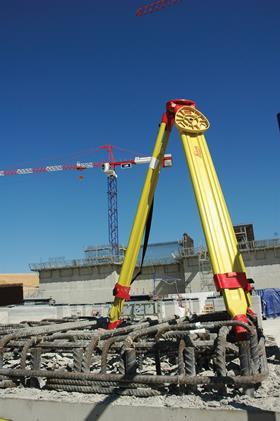 The sheer scale and complexity of the tokamak is reflected by the fact that it contains a million components, which will be put together on site. A 257m-long shed sits a short distance from the tokamak complex. This will be used to make the poloidal field coils which surround the vacuum vessel where the fusion reaction takes place. The phenomenal heat needed for the reaction means it has to be suspended in space using a powerful magnetic field. The poloidal field coils, which wrap horizontally around the vacuum vessel, are up to 25m in diameter and will be the largest magnets ever built. Wire will be brought in at one end of the building where it will be wound into magnetic coils ready for placing around
the vacuum vessel.

Ultimately there will be 39 buildings on the site, many of which are conventional in nature. Laurent Schmieder, responsible for delivering the buildings on behalf of European client body Fusion for Energy, says there has been no interest from UK companies despite €1bn of work being up for grabs. “We have been trying to get UK companies involved but they are reluctant to come here,” he says.

Construction work completes in 2018, with the tokamak operational by 2020. But this date will not mark the end of the world’s energy problems. This project is ultimately a huge, very expensive experiment with no guarantees that it will work. It won’t produce power, as the steam and turbine elements of a power station aren’t part of this project - they will come with later. It is unlikely nuclear fusion will take off commercially until at least 2050, so those conversations about nuclear fission, renewable and fossil fuels will continue - for now.

The International Thermonuclear Experimental Reactor, or ITER as it is now known, was born out of the Glasnost era when Soviet president Mikhail Gorbachev and US president Ronald Reagan agreed to collaborate on the development of nuclear fusion. The project is a collaboration between six countries - China, India, Japan, Korea, Russia and the US - and the EU. The idea is that these countries contribute to the costs of ITER and jointly benefit from the knowledge.

All the countries want to be involved in delivering the project because of the commercial benefits and the chance to gain practical experience so they don’t contribute money, instead they contribute the components.

The project is being built at Cadarache which is also the home of French research facility, the Atomic Energy Commission.

The European element of the project is being delivered by Fusion for Energy. The architect-engineer is a consortium called Engage and is responsible for the design, procurement and supervising the construction of the project. This is a joint venture between four companies: Atkins, Assystem, Iosis and Empresanos Agrupados.

How a nuclear fusion reactor works

Nuclear fusion generates huge amounts of energy when two isotopes of hydrogen combine to form helium atoms. The two isotopes are deuterium, distilled from water, and tritium, generated inside the reactor from lithium.

Nuclear fusion requires temperatures of 150 million ºC. There are several fusion technologies, but the most promising is the tokamak, a doughnut-shaped vacuum vessel where the reaction takes place.

Inside the reactor, heat is generated using a superheated gas which becomes a plasma, a condition that occurs when electrons become separated from their nuclei. The plasma is suspended in space using a powerful magnetic field to prevent it from touching the walls of the vacuum vessel. High-energy particles are shot into the plasma and, together with the magnetic fields, this intensifies the heat.

When the deuterium and tritium fuse, a helium nuclei, energy and a neutron are produced. The neutron is unaffected by the magnetic field so is absorbed by the walls of the tokamak, carrying 80% of the energy as it does so.

The tokamak is 19m in diameter and 11m high, and is double-skinned to allow cooling water to circulate and carry the heat away. It is ringed by coils which generate the magnetic field. Poloidal coils surround the vacuum vessel horizontally and toroidal coils vertically. Coils also run through the centre of the doughnut. These work most efficiently in superconducting mode, which necessitates cooling them to -269ºC using cryogenic technology.

The tokamat will also feature remote handling technology, which will be used when the 440 segments making up the blanket that lines the walls of the vacuum vessel have to be replaced. This blanket is needed to shield the external elements of the tokamak from heat and slow down the neutrons generated by fusion.