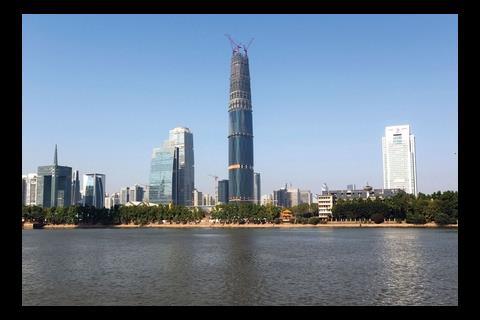 The Guangzhou international finance centre is the tallest building designed by a British Architect. Dubbed the West Tower there are plans for an identical twin to the east. 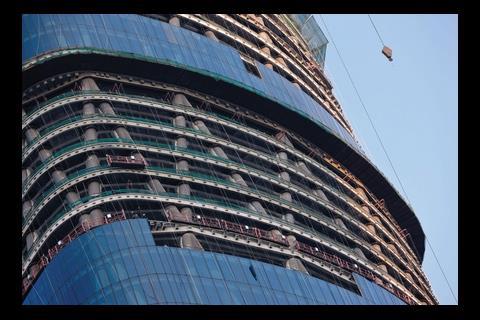 The building features a diagrid structure, visible through the glass cladding. The enormous steel tubes used for the structure are filled with concrete to make the building stiffer and better able to resist earthquakes and typhoons. 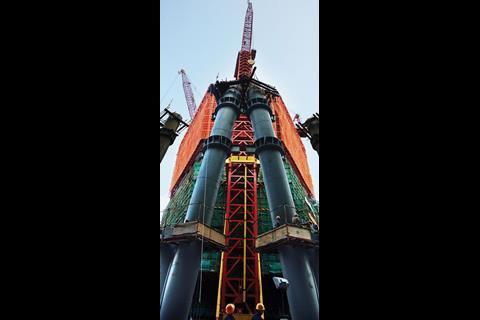 The Guangzhou international finance centre may be Wilkinson Eyre’s first high-rise, but the practice says this means it will be bringing a ‘fresh look’ to its debut

Guangzhou’s other British architect-designed building is barely a block away from the opera house but couldn’t be more different. The opera house is a low-rise, freeform structure whereas the tower is elegant simplicity. Architecturally it is very clean, triangular in plan, with rounded-off corners. The building is all glass with a diagrid structure visible through the cladding that tapers towards the top.

Called the Guangzhou international finance centre (GIFC), it is 432m high and the second tallest building in China. To get this in perspective, Europe’s tallest building will be the Shard of glass at London Bridge, a tiddler by comparison at 310m tall once completed. The tower consists of 69 storeys of offices and a 33-storey Four Seasons hotel at the top of the building. This features an atrium at its centre which helps get natural light down into the hotel.

Architect Wilkinson Eyre’s tower is the tallest to be built by a British architect, yet is the first high-rise realised by the practice, which won the job in a competition in 2004. Director Dominic Bettison says the practice had designed other tall buildings for London so the firm had some high-rise experience, even if these buildings never made it to site. Besides, Bettison adds, you have to start somewhere. “Had Foster done a tall building before he did the Hong Kong and Shanghai bank? Had he done an airport before Stansted?” he asks. “Quite often our most interesting buildings are the ones we have done for the first time, which means you bring a fresh look to it.”

According to Bettison the firm did bring a fresh look to tall tower design with GIFC. “Our building is a reaction to the current crop of post-millennium towers which are quite fiddly and highly complex in appearance,” he explains. “We wanted to create a very elegant, sophisticated shape that was more to do with the geometry and creating a lean architecture. We have put the complexities into the structure and created this slippery, simple shape.”

Bettison adds that having a good engineer on board is essential when tackling a building like this for the first time. That engineer is Arup and the two firms decided a diagrid structure was particularly efficient and, being visible through the glass cladding, was also an important architectural element.

“The geometry of the diagrid had to tick the aesthetic and engineering boxes,” explains Vincent Lam, the associate director of engineer Arup, who heads its Guangzhou office. “It couldn’t be too acutely angled as it wouldn’t work structurally and if the diagrid was angled too vertically, it would obstruct the views out of the building.”

The enormous steel tubes making up the diagrid are filled with concrete. This makes the building structure stiffer, making it more resistant to typhoons and earthquakes.

Because the hotel is at the top of the building, vibration was an issue because people are more sensitive to building movement when lying down. The structural stiffness of this building means vibration is well controlled so no additional damping was needed at the top.

Internally the building is straight forward apart from the area where the office becomes a hotel. A complex transfer structure was needed between floors 67 to 73 because the main building features a central core, but this is replaced by the atrium at hotel level. Instead three small cores at the atrium edge provide structural stability and somewhere to put the lifts. The transfer structure allows the loads from the three small cores to be transferred to the main core where it becomes offices.

The client, Guangzhou City Construction & Development Group, wanted to manage the construction process. “This building is very important to us,” says Huang Wei Gang, director of GCCDG. “We wanted to manage the construction process to make sure the specification was right, reduce our risk as you can’t transfer all the risk to the contractor in China, and ensure it was delivered on time and on budget.”

The compressed construction programme meant it was crucial nothing went wrong. Construction started at very end of 2005 and is due to complete this October. “Once the contractor was appointed, we made sure they followed our construction plan, not another one which would be more risky for us,” says Huang.

The first job was to excavate a 20m-deep hole for the building basements. The last 6m was solid rock and had to be blasted out, which was completed by mid-2006. Ten metre-deep piles were sunk and the basements constructed so that work was ready to begin on the superstructure by June 2007. Two steel fabricators were selected to make the huge diagrid structure as the scale of the project meant one company could not handle the job alone.

Every section of the diagrid was tested in the factory for accuracy before being brought to site and craned into position.

All this careful planning and checking paid off as 432m of superstructure went up in just 18 months. This was achieved using 24-hour working but the repetitive nature of the structure also meant the construction team got building this down to a fine art. As it neared the top of the structure, two floors a day were going up.

Now that the structure is up and the cladding almost finished, the rest of the job should be relatively straight forward, with the building completed in plenty of time for the 2010 Asian Olympics.