Building gets to know Sam, Scrappy and Goldie 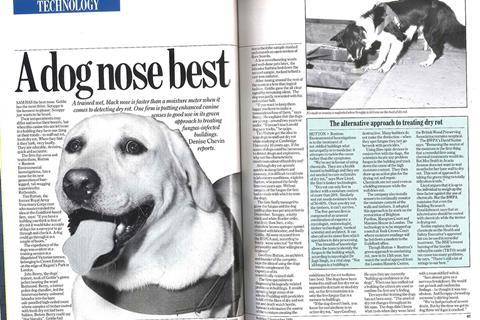 In 1990, the best in the business when it came to locating dry rot went by the names of Sam, Scrappy and Goldie, writes Hollie Tye. At least that’s what Hutton + Rostron Environmental Investigation believed. The firm trained their team of dogs, or “rothounds” as they were known, to bark whenever they smelt fresh dry rot. The company claimed using the dogs was far quicker than regular surveying methods. Tim Hutton, the former Royal Army Veterinary Corps man behind the idea at the Guildford-based firm, said: “If you have a building you think is free of dry rot it would take a couple of days for a surveyor to go through and check it. A dog could go through it in a couple of hours”.

Reporter Denise Chevin wrote: “The expediency of the dogs was evident at a training session in a dilapidated Victorian terrace, belonging to Crown Estates, on the edge of Regent’s Park in London.

“Berry, a former police dog handler, led the boisterous honey-coloured Labrador into the bare oak-panelled high-ceiled room where samples of timber coated with fresh dry rot had been hidden. Before Berry could say ‘dog biscuits’, Goldie had unearthed the sample stashed underneath an open section of floor boards”.