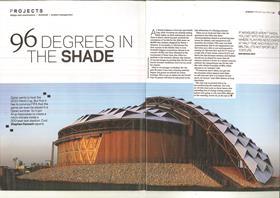 96 degrees in the shade

In last week’s issue of Building Ike Ijeh profiled the new Singapore National Stadium, notable not just for its striking 55,000-capacity steel dome form, but also for its employment of an innovative cooling strategy. The pioneering ventilation system utilises natural airflow and concentrates cooling in the areas it’s most needed. It’s a concept which has been tipped to potentially save the 2022 Qatar World Cup - which has been mired in concern due to the 40oC-plus heat that players would be playing in, although the country persists that the tournament need not be moved to winter, or elsewhere.

This trepidation isn’t new. In November 2010, with Qatar still in the bidding process for the World Cup, Building profiled the stadium designs that the country was considering. In profile was a prototype five-a-side stadium, designed by Arup to create a microclimate below the danger level for playing. Its design included a rotating roof to keep the sun off the pitch before kick-off (World Cup matches cannot be played indoors), an array of solar thermal collectors, and an ice store providing cool air for players and spectators. As things stand, Fifa is having consultations to decide whether the tournament should be moved to Qatar’s winter months.To read the full article from 3 November 2010, go to www.building.co.uk/archive