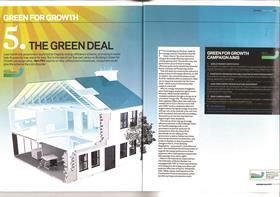 With the announcement that the government is ditching funding for the Green Deal, we take a look back to 2013, when the scheme was officially launched. For the first time, the plan was to meet energy efficiency goals by creating a self-sustaining market, which then energy minister Greg Barker claimed to be “the most innovative thing in the energy efficiency space ever tried by government”.

Many in construction were less excited about the scheme, typified when sustainability consultant David Strong said: “At the moment economic growth and stimulating the economy seems to be the government’s priority and not the grandstanding claims to be the greenest government ever.”

Building reporter Vern Pitt highlighted the lack of long-term incentives for the scheme, which he believed would ultimately make the deal hard to sell. This absence of forethought, he wrote, meant: “The Green Deal appears much more of an after thought to a traditional subsidy scheme rather than the ‘transformative’ programme the government has billed it as.”