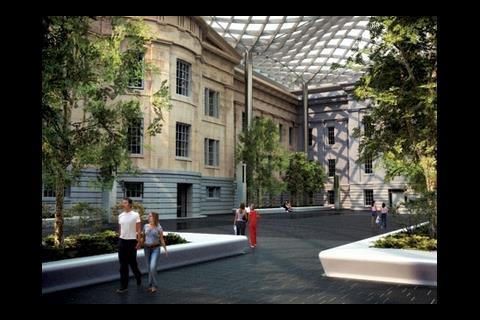 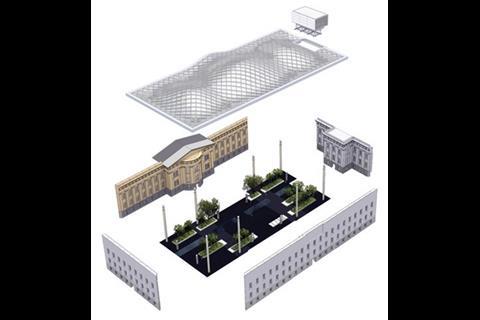 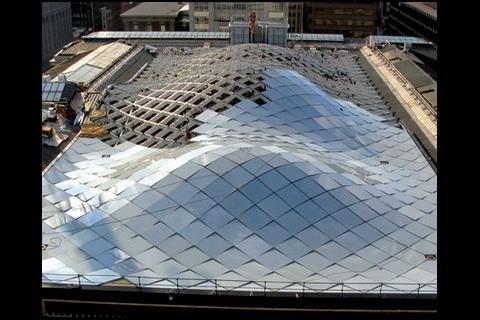 Roofing If you liked the British Museum’s Great Court roof, you’re going to love its designers’ spectacular covering for the Smithsonian Institution in Washington.

When Foster and Partners and Buro Happold get together to design a roof to cover a courtyard, you know you are going to get something special. This architect-engineer team was responsible for the roof of the Great Court at the British Museum, which was an architectural and technical tour de force in 2000.

Now the duo are working on another covered courtyard, this time in Washington DC, creating a roof that pushes technical and aesthetic boundaries even further.

“This is a step onwards from the British Museum roof,” explains Dan Sibert, project architect at Foster. “It’s right at the cutting edge of what you can do.”

It covers the quadrangle between four classical blocks of the Old Patent Office, which today is part of the Smithsonian Institution, that houses the National Portrait Gallery and the American Art Museum. The client wanted to create a large covered space for events.

The brief for this roof was much more demanding than the British Museum. “We couldn’t put any of the structure onto the existing buildings because they are very delicate. At the British Museum, the roof is supported by the surrounding buildings,” explains Mike Cook, the partner at Buro Happold responsible for the structural design. “We couldn’t use the existing buildings to support the roof laterally and we had to design it to withstand seismic loads.”

Furthermore, the roof was the only element that could be used to provide acceptable acoustics in the space, as the walls and floors are made of hard, acoustically reflective stone. It also had to help modulate the environment. This was tough, as Washington DC is on the same latitude as Madrid, with the same extremes of climate. Without solar shading, the courtyard would become an oven in summer.

What is remarkable about the solution is how it is a perfect piece of integrated design. Both Cook and Sibert say the architect and the structural, acoustic and environmental engineers worked closely together to produce a solution that satisfied all these constraints.

“We created a roof that did everything. It is a pure expression of its structure and a modulating influence over the environment and acoustics,” says Sibert. The end result is a roof that hovers like a cloud over the tops of the walls of the old buildings. It consists of three domes that gracefully flow into each other, the highest dome peaks over the pitched roofs of the Old Patent Building. The shell-type roof consists of a rectangular structure arranged diagonally to the courtyard. This structure is glazed and there is no obvious solar shading mechanism.

A major constraint was the requirement for the roof to be supported by columns around the courtyard’s perimeter. “A big driver for the design is the fact we were supporting the roof on eight points rather than the surrounding structure,” says Cook. Using beams to span between the columns was out, because this would have necessitated huge beams and the end result would have been visually dull.

A dome is a more efficient structure, which needs smaller structural elements, but in this case its height was a potential problem with the planners. The solution was to use three small dome rather than a large one. “The tighter the radius of curvature, the more efficient it is,” explains Cook. “If we had gone for a single dome it would have had to be much higher. This was an ideal form for a roof supported on eight columns.”

But a dome or an arch needs either a tie-bar at its base or heavy abutments to resist its natural tendency to push out at the sides. These forces had to be contained within the roof structure. The forces are transferred from the domes to the valleys between the domes and to the sides of the roof. A mechanism was needed to contain these forces around the perimeter of the roof.

The method adopted was also the solution to another problem. A difference between this roof and the British Museum is the latter structure is made from triangles. These have inherent stiffness and do not need to be held together. The Smithsonian roof is made of rectangular elements and something was needed to lock them together so they did not kink out of shape. The answer was tie-bars that follow the profile of the roof in the valleys and were adjacent to the roof edges. The combination of these tie-bars, a beam at the roof edge and the squares connecting them creates an in-plane truss that resists the lateral forces generated by the domes.

Even the columns on this project have to work harder than normal, because they have to take the lateral forces generated by wind and also the shaking forces potentially generated by earthquakes. These means the columns are also acting cantilevers, so they need beefed-up foundations to cope. The actual columns are made from 50mm thick sheets of steel, rolled up with cast steel capitals at the top.

The structural members making up the roof are crucial to its aesthetic, acoustic and environmental performance. According to Cook, there was much debate over whether the structural grid should be triangular or square. A triangular solution was potentially more efficient, but two factors made the team go for a square. The only place to put acoustic panelling to cut the reverberation time of 10 seconds down to an acceptable three seconds was on the sides of the roof structure.

“We needed so much acoustic panelling that it pretty well defined the depth of the members of the roof,” says Cook. “If it had been triangulated, the members would have been shallower so you wouldn’t have had the acoustic benefits.”

There was another reason too. “Everyone had fallen in love with it being square and no one wanted to change that,” adds Cook. Each structural element is 550mm deep. This depth will also provide solar shading.

How the roof is being realised

The roof has been fabricated and is currently being constructed by German cladding specialist Gartner. Sibert has worked with the firm before on other projects.

“The roof wouldn’t have looked the same if it had been a different contractor,” he says. This is because each firm has its own means of production, which has an influence on the final scheme, particular in situations where consultants work closely with specialists – something Sibert firmly believes in.

“My belief is that this type of construction is about information flow and understanding the means of construction rather than completing the design and handing it over to the contractor.”

Foster gave the design to Gartner in the form of a computer code, which set out the geometry of the roof. Gartner then added the necessary detail.

Making the structural grid is challenging, because the roof curves in two planes. This means each structural element must feature a slight twist to accommodate this. Steel, v-shaped members have been employed here as these look better from below than a rectangular profile.

A metal tube is used at the base of each member, which is unaffected by this twist, and a flat metal plate at the top. This is connected by two metal plates at the side, which are made with the requisite twist in the factory. Because these members are purely functional, they are overclad with a series of white-painted metal tubes.

The glass panels are fitted on top of the structure. If the structure had been triangular, the glazing panels would naturally follow the curves of the roof, but square panels won’t. This means each panel has a small step between its neighbours, which is invisible from below, and gives the roof an interesting scaly appearance from above.

The roof elements were made in Germany and shipped to the USA. Scaffolding has been erected in the courtyard to create a flat deck under the roof for workers and to support the roof while it is being built.

Roof sections that resemble short ladders are bolted together, then glazing is fixed on top. The structure has been completed and the glazing is half done, giving a pretty good idea of what the completed project will look like. The roof will be finished in November, when American art lovers will get their roofing equivalent of the Premier League.

For images of other projects visit www.building.co.uk/gallery