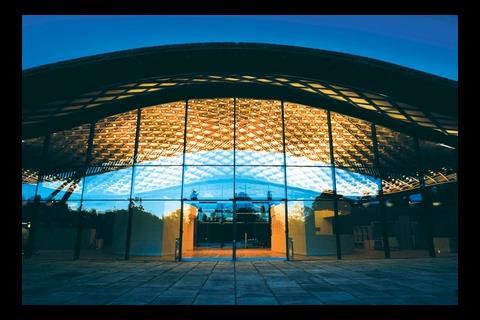 Prizefighter: Howells’ Savill building in Windsor Great Park is up for the Stirling 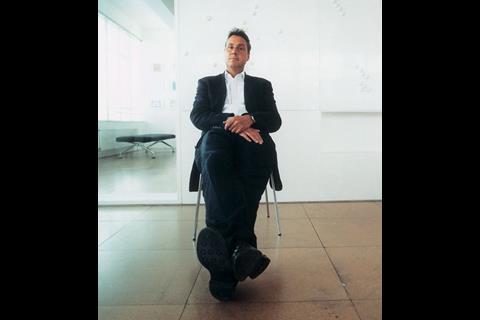 Robert Plant, Ozzy Osbourne, Noddy Holder … the Midlands has produced its fair share of rock stars. Sadly, frustrated musician Glenn Howells wasn’t one of them. But now, with a Stirling prize nomination to his name, the Birmingham architect is about to get his turn in the limelight.

Once upon a time, when the young Glenn Howells still harboured dreams of making it as a guitarist, he had a brief encounter with Richard Rogers.

Howells’ band was playing at a smart country club in Devon, when the great man turned up at the door with his wife, Ruthie, and tried to get in.

“There was a bit of a kerfuffle at the entrance, so I went to see what the trouble was,” he recalls. “The club was run by two rather camp men and I heard one of them say ‘I don’t care which famous museum you’ve designed in Paris – you’re not coming in!’”

Today Howells is a great admirer of Rogers’ work but sitting behind a white table in his Birmingham studio, he cracks up, sighs and rests his head in his hands, still chuckling.

He likes telling stories – there’s an anecdote to accompany every major event in his life, including how he came to win a place on this year’s Stirling prize shortlist for the first time. The winner will be named on 6 October.

He is nominated alongside star architects such as Norman Foster and Rem Koolhaas.

A betting man could be forgiven for considering him a long shot, but he is fast becoming a force to be reckoned with. The project he is shortlisted for, the Savill building in Windsor Great Park, has been hailed for combining modern design with natural, locally-sourced materials.

“We found out that the client, Crown Estates, produced a lot of timber so we started having conversations with carpenters,” he says. “We eventually went into the presentation with an entourage of carpenters and a model of the building, saying we wanted to weave a canopy out of the wood, mound the landscape and end up with a piece of poetry. And they went for it.”

Howells’ passion for woodwork was ignited at the age of five, when he began accompanying his father, a carpenter, to building sites in the Black Country.

“He’d take me along to give my mum some time off,” he says. “He’d hand me a plank of wood with half-knocked-in nails all the way along and my job for the day would be to bash them all in and hand back the wood.

I didn’t have wooden toys as my playthings – I had actual lumps of wood.”

Howells took a year out after school to give the music business a try. Realising he was never going to hit the big-time (“I was in a terrible band called Ponderosa where everyone was so old I was the only one without a vasectomy”) he changed tack after he saw an advert in music magazine NME for the Plymouth School of Architecture. He applied, went for an interview and was offered a place on the spot.

After nearly failing his diploma – he blames postmodernism, or “showmanship with a bit of half-baked thinking behind it” as he saw it – he worked for a few years in south-west England before heading to London just in time for the 1990s recession.

He joined the practice of Robin Spence (nephew of Sir Basil). As the recession started to bite, and fewer and fewer projects were coming into Spence’s office, Howells realised he had to set up on his own. A friend in Plymouth provided him with his first solo commission – a refit of a Chinese restaurant. Times were so hard, he says, that he strung the job out for a year. By then he no longer survived on fees, but on Chinese food.

At this admission, Howells sits back in his chair and looks around the huge meeting room, possibly marvelling at how far he has come since that first job. The view from the window takes in most of Birmingham’s major projects. From one window, there is Howells’ own Rotunda building for Urban Splash. Out of another, Future Systems’ Bullring shopping centre glistens in the autumn sun. From a third, you can see Ian Simpson’s Beetham Tower.

Outside the room, bright young things buzz about the place. It looks like an architect’s office in a film – big open spaces with whitewashed walls, located in a grimy inner-city neighbourhood. To get there, you have to pass discount furniture shops, fast-food joints and junk yards.

The location is significant, as it is down the road from Howells’ first “real” commission – the Custard Factory, an arts and media space that is regarded as pivotal in Birmingham’s regeneration.

That scheme, he says, is the reason his practice is based in Birmingham, with a much smaller office in London. It is where he grew up and where he began life as an architect.

As one of the drivers of the city’s regeneration, Howells was recently asked by the council to look at the “vision of the city and how it physically presents itself to the outside world”. He was also instrumental in commissioning a masterplan for the city centre, awarded to Urban Initiatives last month.

He says his dedication to Brum is actually the reason he didn’t take part in the masterplan competition, despite being invited by several of the bidding teams.

“I felt I could be useful to the place not by bidding, but being part of the conversation about how to take it forward,” he claims. “I’ve been keen since 1995 that the place should have a clear idea about where it is taking itself. It’s too big to be left to chance.”

On the record, he is self-consciously upbeat about the city’s regeneration progress. “What’s tantalising about Birmingham is that it should be, and I think it will be, fantastic – a really important European city,” he says.

Behind closed doors, however, sources say he has been known to vent frustration at the lack of progress, which he believes is because of council politicking.

Howells is not as diplomatic when it comes to other cities’ projects. He sits on Cabe’s design review panel for the London Olympics and is happy to join the chorus of designers apprehensive that the venues will be poorly designed owing to lack of funding.

“It is really important that what gets left behind is not undermined by a failure of nerve,” he says. “The organisation has to hold firm, take a breath and have the confidence to face up to the procurement issues.”

Lack of funding didn’t stop Howells realising his vision for Windsor Great Park. “We lost about £180,000 making the Savill building,” he laughs. Of course, a Stirling nomination is a powerful consolation. “When we found out we had made it down to the last six, we popped the champagne.”

The practice is taking four tables at the awards ceremony in London next month, at a cost of more than £10,000, which will be mostly filled with subcontractors from the project. “All the people we bothered at the outset are now insisting on coming along, even if they have to pay for themselves,” he says, adding wryly, “It’s going to be a very disappointed coach on the way back.”

The Savill building deserves to win, he says, because of the care and attention that has gone into the building. But he remains convinced that a project in Germany will be the judges’ favourite on the day – either Foster’s Dresden station redevelopment or David Chipperfield’s Museum of Modern Literature in Marbach am Neckar.

He pauses, then pulls a rabbit-startled-in-the-headlights face: “I’m practising my thrilled but disappointed look for the night.”

What’s your favourite building?
The Iron Bridge in Coalbrookdale, Shropshire, is one of the most daring and beautiful metal structures in the world, partly because it shows in its smallest details the imagination and skill in connecting metal, often adapting earlier carpentry connections.

And least favourite?
A testament to unimaginative engineering combined with the wrong brief, New Street Station has presented the worst first impression of this terrific city for a generation. Rebuilding New Street presents a huge opportunity to create a world-class arrival for passengers and to reconnect the city centre for pedestrians at its heart.

Who would play you in the film of your life?
Anyone except Tom Hanks

Who’d be your desert Island companion?
Jayne (my partner) and if no family are allowed, Jack the dog who listens to me

For the latest on the run-up to the Stirling prize, check www.building.co.uk/breakingnews