Gotta get through it: Halcrow builds the UAE's longest tunnel 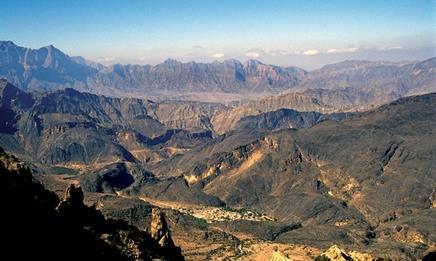 This mountain range stands between Dubai and one of the UAE’s most important ports. Which is why a team from Halcrow is holed up there right now, enduring the heat and hard rock on the country’s longest ever tunnel project

‘That’s your headline, then,” the Dubai taxi driver said when he was told that I was off to see a road job in Sharjah. “You can call it ‘The Road to Nowhere’.”

There’s two reasons for this dismissive remark. First, people in Dubai look on their northern emirate neighbour much in the same way that Holland does Belgium: they don’t think it’s much cop, frankly. And Sharjah is a dry state so alcohol is banned and mixing between unmarried men and women is illegal, so why would you want to go there?

The second reason is more literal: the road does indeed come to an abrupt end, high up in the Hajjar mountains, where it meets a wall of jagged rock. The only way to make this a road to somewhere – specifically to the major port of Khawr Fakkan on the Gulf of Oman – is to build the biggest rock tunnel in the UAE, in one of its most inhospitable and remote outposts. It’s a job that has required the sweat and toil of a British engineer and an Iranian contractor, as well as an awful lot of high explosives.

A way through the mountains

The container port of Khawr Fakkan is increasingly important for the UAE. Last summer it was on the brink of becoming pretty much the only way to get goods into the region, after the commander of Iran’s Revolutionary Guard threatened to cut off the Strait of Hormuz, a vital waterway to the north, during a stand-off with the US Navy. But even without the intrusion of such international politicking, the port is the arrival point for a variety of goods that are distributed via Sharjah throughout the UAE.

The trouble is that, in order to get from the port to the distribution centre on the outskirts of Sharjah, the container lorries have to perform a reverse dogleg – a route that is 50km longer than it would be if there were a road through the Hajjar mountains. To rectify this, a 26km road is being built that will eventually loop east from the village of Diftah, through the Hajjars, skim the village of Shis before plunging down to Khawr Fakkan (see map overleaf). The twin-bore tunnels, which will be 1.3km long and will carry a dual carriageway, are part of a 9km section of road that UK engineer Halcrow is working on between Diftah and Shis.

Tunnelling through the rock is slow going. The first blast was in July 2007 and both tunnels are expected to break through this November. Hard rock is not the only thing Halcrow’s team has had to contend with. There is also the heat. “There is not a breath of wind up there in the summer,” says senior project manager Paul Cooper. “If you put your hand on a rock it will burn.”

Working in the tunnel during the summer can provide many of the workers with some respite, as giant fans noisily whirr to help cool down the workface. But it gets so hot in this part of the world during the summer months that firms are obliged to observe a law that says that work must stop between noon and 3pm. Work also has to stop if the temperature in the shade touches 50ÞC.

The tunnel is blasted through the rock using explosives. After the blast loose rock is removed and the tunnel sides sprayed with shotcrete and rock bolts are fixed to temporarily stabilise the rock prior to casting the concrete lining

Getting to the site is another issue. Because the scheme is in the mountains, workers from Iranian tunnelling contractor, General Mechanic, are billeted lower down in the valley, but one access road has been swept away by flash flooding.

The valley also houses the explosives store, which is guarded by 10 police officers. “It took us nearly a year to get the explosives store up and running,” says Halcrow’s chief resident engineer Steve Hodgkins. “It’s got double fencing and 11 CCTV cameras. Getting explosives in this region was always tight but after 9/11 it got tighter.”

Before blasting, “drill jumbos” ordered in from Finland and Sweden drill the tunnel face. The explosives are ferried up to the tunnels and placed in the drilled out holes in the rock ready for blasting. “They’re relatively standard tunnels but this is hard rock tunnelling – drill and blast,” says Hodgkins.

There is not a breath of wind up there in the summer. If you put your hand on a rock, it will burn

Blasts on each tunnel are staggered to avoid damage to the other. The explosive is so powerful that on one occasion, a piece of debris the size of a housebrick crashed through Halcrow’s offices 2km away.

After blasting, dumpers cart away the fragmented rock from the workface. Halcrow then surveys the rock and decide where it needs supporting. Special shotcreting machines spray concrete reinforced with metal fibres onto the tunnel sides to form the lining. Then the drill jumbos are brought back to drill holes, insert rock dowels and grout these to lock them into place. Hodgkins says the shotcrete and rock dowels act as temporary works to stabilise the rock and make it safe before the permanent lining is installed. “The permanent lining is unreinforced concrete,” says Hodgkins, adding that the shotcrete sprayed out settles at 15-20cm thick. A waterproof membrane is then fixed into position using dowels before the permanent concrete lining is cast.

The permanent concrete lining is cast using this machine. It is positioned inside the tunnel and is concrete pumped between the tunnel wall and the metal shuttering on the machine. Once the concrete has cured the machine is moved onto the next section

The project actually started off as a single tunnel before Halcrow decided that a pedestrian escape route should be upgraded into a second tunnel. “The cost of the second tunnel was not that much more,” says Cooper. Nonetheless, this and other changes have helped double the cost of the job from 210m dirhams (£40.5m) to at least 425m dirhams (£80m). The final bill has still to be rubber-stamped by the Directorate of Public Work, but Cooper expects it to be approved. “It will probably be higher because of the variations and changes to do with the designs. They are a good client and there’s no point in trying to deceive them.”

Halcrow has also been designing a 5.5km twin-bore tunnel to straddle the middle of the route. But the firm has been asked to hold off working up more designs for the moment. No reason has been given, but Cooper suspects he knows why. “They haven’t officially stated the cause but we think it’s to do with the downturn. I think they just want to defer it for the moment.” Still, without that tunnel, the link will not get built, so it would appear to be a temporary halt.

The squeeze on global credit has had other repercussions for the job. Work slipped for a few months while General Mechanic sorted out its supply lines. As an Iranian firm, it is difficult for it to ship money out of the country in large quantities at the best of times because of UAE rules governing the movement of finance. The credit crunch has made this even worse. As a result, says Hodgkins, the start dates slipped. “There is a lot of upfront cost on a job like this,” he adds. “Some of the problems meant they couldn’t order the special shotcreting machines when they wanted to.”

Work in progress inside the tunnel. Note the ventilator pipe used to provide fresh air to the workface

Still, the relationship between Halcrow and its Iranian colleagues has not suffered – while I am there, they even joke about Iran’s nuclear programme. “These sorts of delays can happen,” says Hodgkins, a man who has had time to get used to the workings of the Gulf, having first come out here in the seventies.

He is also having to get used to the impromptu visits of Halcrow’s client – the King of Sharjah, Sultan bin Mohamed Al-Qasimi, who rules the emirate. “He comes up unannounced,” says Hodgkins. “He’s been here three times since 2006. He seems pretty impressed with what’s going on.” There is one thing that bothers Hodgkins, though. “I just wish he’d give us a bit more notice so I can put my tie on.”

Original print headline - Gotta get through it