Green army: How the Green Deal will work

The government hopes its Green Deal will encourage homeowners to install energy efficiency measures and create an army of 250,000 to do the work. Sounds great, says Iain Withers - but will anyone join up?

An ambitious plan to green UK homes was unveiled last week by the energy secretary Chris Huhne. Details of the long-awaited Green Deal were set out in the Energy Bill presented to parliament. The government hopes to create a workforce of 250,000 people to fit energy efficiency measures into properties. It is seen as a key part of the UK’s efforts to meet its target of reducing carbon emissions by 34% by 2020 and 60% by 2050.

The Green Deal aims to make existing homes more energy efficient by giving incentives to homeowners. Rather than the current system of local and national grants for specific technologies, it works by providing people with upfront finance to carry out energy efficiency measures, which customers then pay off through their energy bills. The repayment period is yet to be finalised but could be anything between five and 25 years depending on the measure. If the homeowner moves property, the charges pass to the new occupier. Green Deal financed work is expected to begin in autumn 2012.

What’s in the plan?

The main surprise of last week’s package was that contractors will be required to gain accreditation to take part in the scheme. The government hopes this will reassure homeowners who may otherwise have been afraid of being ripped off by cowboys.

Huhne also set out plans for a system of Green Deal advisers to inform homeowners of their choices and ensure they get value for money. They will check that work passes a “golden rule” that the cost of measures over the repayment period does not exceed the energy efficiency savings made.

The idea will also be extended to the office sector although the current focus remains on homes. Many questions remain unanswered, such as how Green Deal finance will be structured and regulated and who will accredit and train contractors. The government says the existing system for inspecting properties and issuing Energy Performance Certificates could provide the basis for an accredited Green Deal advice service. Further details will emerge in secondary legislation, expected early in 2012.

Industry associations welcomed the government’s proposal to accredit vendors, specifiers and installers doing Green Deal work, although who will take on this role is not yet clear. Those wishing to join the ranks of Huhne’s Green Deal army will need to await further orders.

The Federation of Master Builders (FMB) has been demanding an accreditation system for years. Brian Berry, director of external affairs at the FMB, says he believes the industry can meet the skills demands of the Green Deal: “We have the skills in the industry; what many builders don’t have is the knowledge. Most builders can adapt to loft insulation and wall insulation.” 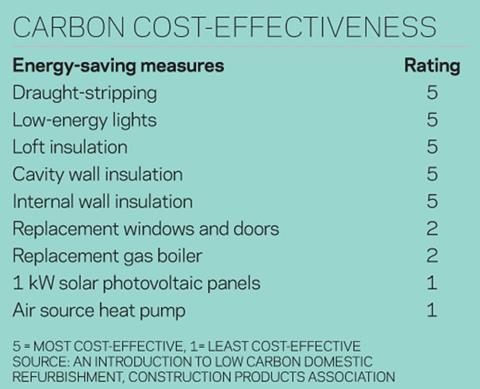 But Jeremy Kape, director of property investments at Affinity Sutton, predicts problems will arise between 2020 and 2050 if the industry does not retrain. “You will need a high level of understanding of tolerances and making buildings airtight,” he says. “There’ll be a skills gap between 2020-2050.”

Do the sums add up?

Concerns have been raised about whether the Green Deal will work commercially. The viability of many measures will depend on fuel inflation - the higher the fuel inflation the more money is available to pay for work without breaking the “golden rule”.

John Tebbit, industry affairs director for the Construction Products Association, says that with no fuel inflation and an interest rate of around 6%, only basic draught proofing, cavity wall and loft insulation would be viable. However in the more likely event that fuel inflation is around 3-4% over the course of a deal, a far wider range of work will be available, including more extensive work on air leakage.

Tebbit says the key to the Green Deal will be marketing it effectively. “This is in effect a financial product. You’ve got to be clear to people what assumptions you are basing it on, if it is on historical fuel prices for example.” He says government should sell the non-cash benefits of having a warmer, less draughty home. With the right message he is optimistic there will be demand. “If fuel prices keep going up and people start telling their friends that they’ve had it done and how good it is, then it could take off.”

Contractors will also be watching to see who steps forward to provide Green Deal finance. The government expects a diverse array of local and national bodies from local authorities to big insulation firms will opt to provide credit. But many commentators predict high-street firms such as banks and retailers may seek to offer a “one stop shop” for Green Deal finance, advice and implementation. They could use their brand power and links with institutional finance to get a stranglehold on the market. Construction firms may need to cosy up to these firms to become preferred partners.

Construction industry figures have also expressed concern that SMEs could be crowded out of the market. Berry says: “We’re very concerned retailers would be tempted to partner with big contractors and squeeze out small businesses who are relying on this.” He suggests SMEs could link together to arrange Green Deal finance, possibly through an independent third party such as the Energy Savings Trust.

Will the Green Deal work?

Provision is made in the bill to regulate landlords of offices and homes if take-up is slow in the private rented sector, with a review of progress slated for 2014. Proposed powers include requiring landlords to bring their property up to a defined threshold before it can be rented out again. Industry detractors question whether there will be enough owner-occupier demand without the threat of financial penalty.

John Alker, communications manager at UK Green Building Council, worries the scheme will not stoke sufficient demand and provide the building industry with the certainty it needs. “Because the savings for customers are relatively modest, there seems to be a missing compulsion,” he says. “That’s what will create certainty for our industry.”

Whether or not this is going to be profitable for the private sector is critical. They need to see a rate of return, but on the other side you need to drive the interest rate down to make it appealing to customers.”

So will it work for construction? With investors, high street firms, energy suppliers and homeowners competing for the best deal, builders may wonder if there is going to be anything left for them.