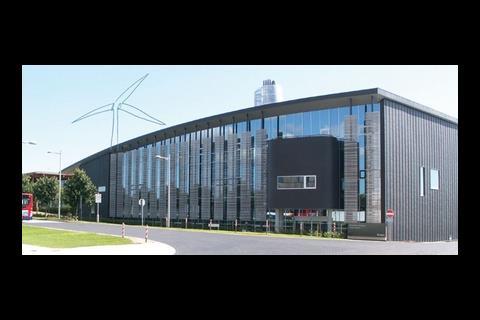 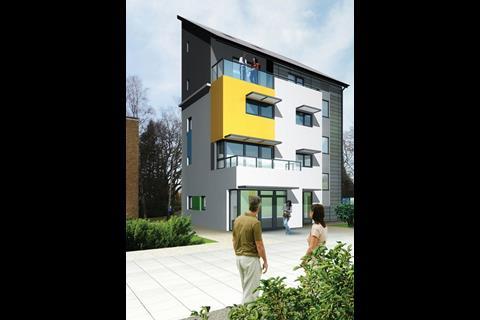 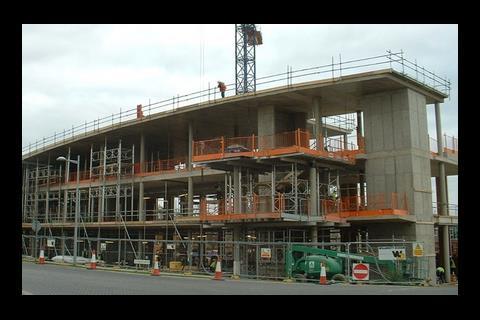 The Physics of Medicine building for the Cavendish Laboratory at Cambridge university, designed by Ramboll UK, uses a concrete mix of 60% ordinary Portland cement and 40% ground granulated blast furnace slag. This has saved 160 tonnes of CO2 compared with concrete made using 100% Portland cement. It’s the equivalent of running wind turbines or photovoltaics to meet 10% of the building’s energy needs for eight years.

It’s a sobering statistic. Two billion tonnes of carbon dioxide are emitted every year from the global production of cement. This is equivalent to 5% of all global carbon dioxide emissions – more than aviation. And this at a time when construction is under pressure to prove its green credentials.

Manufacturing traditional Portland cement is an energy-intensive process. It is made by heating limestone and clay in a giant kiln at about 1,500°C to produce clinker, which is then ground with gypsum to make cement. But are there any alternatives to clinker? Here, Building examines four of the latest approaches.

Aggregate Industries is using a novel cement mix on the construction of the Creo house, which is currently undergoing evaluation at BRE’s Innovation Park near Watford. The concrete, which is being used with insulated concrete formwork, replaces a high percentage of the clinker with pulverised fuel ash (PFA), which is then combined with recycled aggregates. “The aim is to get the embodied energy down as much as possible,” says Ian Cox, Aggregate Industries’ director of construction solutions.

The mix comprises both recycled aggregates and secondary aggregates – which are a by-product from the firm’s china clay mines in Cornwall. It has about 30% less embodied CO2 than regular concrete, and importantly it is also eligible for credits under BREEAM because of the recycled content.

In May, after two decades of development, RockTron launched what it terms an “eco-substitute” to cement. This is based on PFA that has undergone a purification process. The main advantage of doing this is that it enables a higher substitution of clinker than conventional PFA – more than 50% – so results in concrete with even lower embodied carbon. Research is under way to see if this can be increased beyond 60%.

Philip Owens, an independent concrete consultant, says cement made with RockTron Alpha eco-substitute will conform fully to BSEN 197 – the standard for the composition of cement. He adds that the time the formwork needs to stay in place for concrete made using this eco-substitute are the same as for traditional concrete.

Another advantage of the RockTron purification process is that it can re-use PFA that has already been sent to landfill, reducing concerns over lack of supply and landfill.

“Blended” or “composite” cement is the term given to cement where a proportion of the clinker is replaced with other cementitious materials.

For walls and columns, using a blended cement often means the formwork needs to stay in place for an extra day

The most common clinker substitutes are pulverised fuel ash, which is a waste product from coal-fired power stations; ground, granulated blast furnace slag, which is a by-product of iron manufacture, and limestone, which is already used in the cement-making process.

These factory-blended cements have been available for a number of years; however, interest in their use is rising, according to the Concrete Centre, the UK concrete industry development organisation. Figures from materials supplier Lafarge UK show that sales of these types of cement have risen in the five years to 2008 from just over 5% to 25%. “We are seeing greater interest from specifiers because of the cement’s embodied CO2, which is generally considerably lower than traditional cement,” says Bill Price, Lafarge Cement UK’s national commercial technical manager.

There are pros and cons to using concrete made with these mixes. Generally, the more clinker that is replaced, the longer it takes for the concrete to develop strength. Michael Ottway of concreting contractor Whelan & Grant says this lack of early strength is the main drawback: “For walls and columns, using a blended cement often means the formwork needs to stay in place for an extra day. But on single-storey buildings where there isn’t a lot of repetition it isn’t usually a problem.”

This lack of early strength also rules them out for post-tensioned slabs, but as Price points out, concrete made with blended cements tends to keep gaining strength over time and can become stronger than concrete made using ordinary Portland cement.

There are also advantages in terms of durability; PFA cement has higher resistance to sulphates and chlorides, so offers better protection to reinforcing steel. It also generates less heat when it sets, so in large concrete pours and foundations it is more resistant to cracking when it cools down, allowing thicker slabs and larger pours.

Carbon-negative cement could be the biggest breakthrough the construction industry has seen for decades. Developed by NovaCem, a spin-off company of Imperial College in London, it is claimed to be carbon negative – that is, it absorbs more CO2 than it takes to manufacture. The secret lies in the raw ingredients. Rather than limestone, it uses magnesium oxides which need lower heat in the manufacturing process than ordinary Portland cement, generating less CO2.

Concrete also absorbs CO2 when it cures. Portland cement soaks up anywhere between 0.2 and 0.5 tonnes, which, taking into account the production process, leaves an overall carbon footprint of between 0.3 and 0.6 tonnes.

NovaCem says production of a tonne of its cement generates 0.4 tonnes of CO2 but absorbs 1.1 tonnes when it hardens, so that on balance it absorbs 0.7 tonnes of CO2 from the atmosphere.

Carbon-negative cement is still several years from being commercially available, and this problem of commercial viability, says Price, is one of the biggest challenges facing the eco-cement industry. “Cement is used in huge volumes so it must be possible for any new formulation to be made in bulk, preferably from materials that can be found worldwide”.