CVs are solicited this week from anyone with a way with words, a lupine surname, a deep affinity with the heroes of trashy American cinema and waitering skills. Eyewatering dress sense desirable

Dances with Wolfs
Those concerned about construction training in schools will be intrigued to learn that the government last month commissioned an “independent review” into vocational training for 14-19 year olds. The review, Michael Gove’s team announced, would be chaired by one Professor Alison Wolf, of King’s College London. Nothing so odd in that, except perhaps the fact that Wolf is the mother of Rachel Wolf, Gove’s former adviser who is now running the New Schools Network - the body that has been given a £500,000 grant by the Department for Education to help interested parties set up free schools. No doubt those in education circles who mutter darkly about cronyism are just crying Wolf …

Double plus ungood
A new language appears to be evolving at Davis Langdon. Gillian Sutherland, head of press, announced to one of my colleagues last week that “Davis Langdon doesn’t do QSing”. Pressed to explain, she said that what the firm did was “cost consultancy”, which no doubt is completely different. Staff were also given a lesson in the semantics by means of an email telling them that Aecom is in fact pronounced “A-Ecom”. Surely it’s now only a matter of time before the clocks strike 13 at MidCity place?

God bless y’all
Meanwhile, at the Atkins press office, Americanization is just as pervasive - only in a much more relaxed form. In one mistakenly forwarded email stream the word “dude” appeared no less than three times - as in “Dude, you were like a whirlwind of stories in that call this morning”. “Buddy” also made a showing, as did “no sweat”. All in all, the exchange read like an early draft of American Pie II. Is this an attempt to make PBSJ, Atkin’s new acquisition from across the pond, feel more at home? 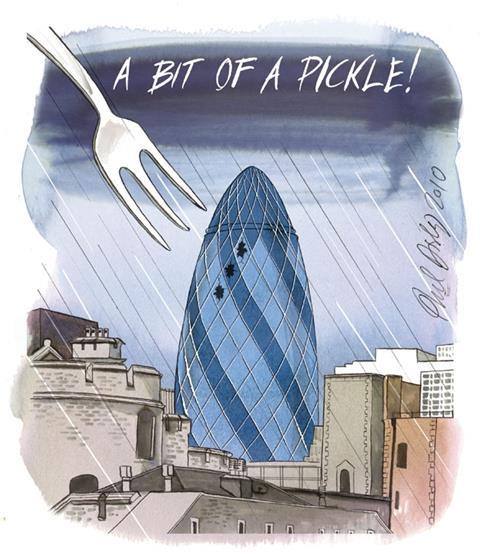 Gherkin needs a plug
The typical autumnal weather we have been “enjoying” of late has caused disruption in some of the most unlikely places - including, it seems, the Gherkin. One of my spies tells me that when she was at a function there a fortnight ago, water was leaking from no fewer than three places in the landmark building. The structure has weathered very well since shedding a pane of glass some five years ago, so hopefully any leaks will be plugged before the weather puts a dampener on any more occasions.

Pickles relished
Larger-than-life communities secretary Eric Pickles spent much of his conference speech this week directing jibes at his predecessor John Prescott. The irony is that in many ways he is the Tory reincarnation of Prezza, representing, as he does, some twisted part of the soul of his party that is held in rapturous regard by the rank and file. Pickles is blessed with the knack of being able to break the worst news with a broad smile. Nowhere was this more evident than at the Birmingham city reception, where he received an extended pitch from Mike Whitby, Brum’s Tory leader, for some government recognition. “I can promise you two things, Mike,” Pickles said, to loud support. “More powers than ever before, and less money than ever before.”

Where did you get that dress?
Architects turning up in their finest at the Stirling prize awards ceremony were full of admiration for the brave woman who turned up in gold patent-leather shoes. But she was outdone by winner Zaha Hadid who continued the gilt theme with a head-to-toe, yellow-gold dress that almost blinded half the audience. Fortunately she avoided comparisons to a Quality Street sweet wrapper by adding a pair of tubi-grip black sleeves to the ensemble. In the end, then, she looked like a queen bee. And deservedly so.