The government maintains that localism will boost development, but the latest planning figures show the exact opposite. Just how scared should developers be by this new political reality? 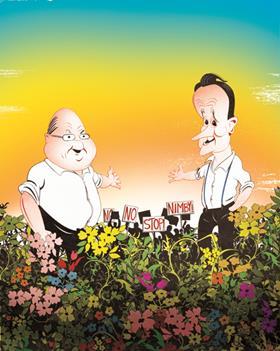 Last Monday, the high-stakes punch-up between government and industry over localism entered its second round. This new phase in the conflict follows a damning ruling last year that communities secretary Eric Pickles acted unlawfully by abolishing the regional plans that set housing targets across the country. This time the points went to Pickles, but Scottish housebuilder Cala Homes, which called for the judicial review, has already said it will appeal.

This is just the start, and as the impact of government’s localism agenda becomes clear, developers will need to know exactly where they stand. On page 32, the government’s driving intellectual force behind localism - decentralisation minister Greg Clark - tries to allay concerns. But first of all, Building charts exactly what is happening and just how frightened you need to be.

Cala’s challenge to the government is unusual, but given the impact of the proposed changes to the planning system, it’s more surprising that other housebuilders haven’t joined in. Because this is anything but an academic debate.

The latest figures from planning consultancy Tetlow King and the National Housing Federation, seen exclusively by Building, show that since Pickles scrapped regional strategies in May, plans for 216,459 homes have been abandoned by local councils no longer coerced into accepting them. The consultancy estimates 300,000 planned homes could ultimately be scrapped, a tenth of the total the previous government wanted to build by 2020.

Opposition parties talk about devolving power but they lose heart when in government. But for the architects of this, such as Greg Clark, there’s no cynicism, they are absolute believers

Hence localism is a complete game-changer for the construction industry. Nearly everything it thought it knew about how to negotiate the planning system and public life is changing - and who to negotiate with. Peter Redfern, chief executive of Taylor Wimpey, recently told a Localism Bill committee that he’d met with 25 council chief executives in the past few months. “To be honest, I did not spend anything like as much time on that process a year ago,” he added.

Quite so. The fears of the development industry are simple: that by relinquishing central control, the coalition is handing the future of the industry to the people who have spent the past three decades fighting development at every turn. Exclusive figures from Barbour ABI show the number of large residential planning applications being granted fell dramatically in the three months running up to Christmas by 28%.

The coalition means business. Pickles set his stall out within days of assuming power, by confirming the abolition of regional plans and revoking the hated (by Tory councils) guidance encouraging the development of back gardens at high density.

The localists’ argument is that decisions, whether over the number of homes built, or how a doctor’s surgery is run, should be made as close as possible to the community affected. Dermot Finch, a former Treasury policy adviser to both Ken Clarke and Gordon Brown, and one-time director of think-tank the Centre for Cities, says: “Typically, opposition parties talk about devolving power but they lose heart when in government. But for the architects of this, such as Greg Clark, there’s no cynicism, they are absolute believers. This is happening.”

The most obvious articulation of this almost theological commitment to local power is in the Localism Bill. Published in December, it makes real the intention to abolish the regional strategies. So what effect has it had? The government’s argument that because of local opposition very few of the 216,000 cancelled homes would have been built anyway has some measure of truth, particularly in the recession.

But this is countered by the fact that housebuilders were becoming adept at using the old system to win appeals on land against those local complaints. Taylor Wimpey, for example, has a 94% success rate on appeal. So these homes might not have come as quickly as the regional plans predicted, but they would have been built eventually. Robin Tetlow, director at Tetlow King, says: “Most of the loss is in major urban extensions that councils don’t want. These are big numbers and the effect will be felt. Cancelling these also puts more pressure to build on other green belt land.”

Rather than tell councils what they have to provide, the coalition’s answer is to use a market mechanism to incentivise them to allow more news homes. Called the New Homes Bonus, this will provide six years’ average council tax - about £8,600 - to councils for each home built, money that has added allure given the eviscerating funding settlement councils are currently digesting.

And there is some anecdotal evidence that it is starting to work. Stephen Stone, chief executive of Crest Nicholson, says he has received calls from council chief executives in the last two months wanting to bring forward sites - motivated by the possibility of government cash. But it is far too early to tell if this will have a significant effect. Graham Cherry, chief executive at Countryside, says: “We’ve had one or two councils becoming a bit more proactive, trying to force the pace on developments, but others are clearly retrenching. The clouds are still swirling and it’s too early to say what the general effect will be.”

The question is: what is localism when different parts of a community have different views? There are plenty of questions unanswered

The suspicion, however, remains that those predominantly urban councils that wanted to build homes will take advantage but that the wealthier, leafier southern councils won’t be tempted. This is evidenced not just by the Prescott-identified growth areas of Milton Keynes and Ashford reining back housing numbers, but also in councils like Tory-led North Somerset, which has cut the new homes it will allow from 26,500 to 13,500.

Elfan Ap Rees, deputy leader of the council with responsibility for planning, is clear that he is simply reflecting the will of his voters, the vast majority of whom do not want more homes. So why isn’t Ap Rees tempted by the bonus? His response is worrying. “The bonus is simply not enough money to make a difference - when you actually do the sums, it just doesn’t work.” He is not alone.

However, the abolition of regional strategies - with all its implications - is just the start. The bill also contains a raft of measures that are causing great concern - from a wholly new neighbourhood tier of the planning system, to giving local interest groups the right to veto development on “valuable” local sites while they try buy them. This “assets of community value” proposal, introduced to help save pubs or village greens from sale, could be used by anti-development groups to put a temporary ban on construction. And the clause allows local authorities to set the length of any moratorium on sale.

What’s the worst that could happen?

One example of how this brave new world might come unstuck is a development of 10 homes by housing association West Mercia in a village called Clent. This is on a piece of land formerly owned by the parish council, which fully supports the development. However, residents around the development have campaigned bitterly against homes being sited on “the Pleck”, the pleasant copse they walk their dogs on. Their stance has won the support of the local MP and some members of the district council - resulting in stalemate for the scheme. West Mercia has now appealed, with the result expected in the next week. Under the proposals in the Localism Bill the campaigners could try to generate their own neighbourhood plan as it needs only three local people to propose a plan, which then goes to a referendum. 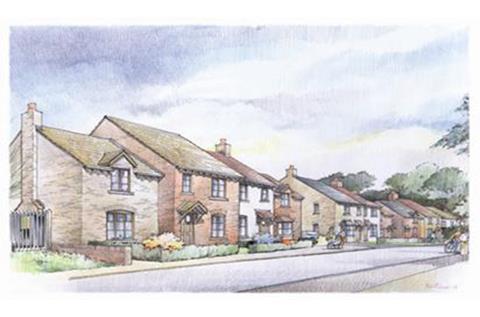 West Mercia’s proposal for 10 homes on ‘the Pleck’ site, which has been opposed by locals

There could be futher difficulties because the Pleck is exactly the kind of site likely to fall under the “assets of community value” part of the legislation. Peter Quinn, development director at West Mercia, says: “The question is: what is localism when different parts of a community have different views? There are plenty of questions unanswered. If people have the ability, through the legislation, to stop this kind of scheme, then they may well do so.”

All these barriers are supposed to be offset by one big move in the other direction: the reinstatement of a presumption in favour of development in the planning system, for the first time in England since the eighties. But, despite promises, there is no mention of this in the Bill, causing outrage from developers. While coalition politicians say the presumption in favour will form the centrepiece of a new planning guidance regime, planners say it isn’t enough. Roy Donson, regional planning director for Barratt Developments, says: “I am very surprised, given the amount of publicity it has had and the commitment to it I have seen in statements, that it isn’t in the Bill. It would effect a cultural change. That is a very important starting point.”

But the direction of change so far is clear and for the coalition, localism goes much wider than just the Bill. For example, prime minister David Cameron has confirmed that the government will implement existing but dormant laws to allow council tenants to bid to run their own estates - a policy already being used by tenants in Earls Court to blow a huge hole in the planned £2bn redevelopment of the exhibition hall and surrounding homes by Capital and Counties.

The coalition also wants to give councils the single most important power they desire: control over money. A review of local government finance, being started now for conclusion in the summer, looks set to give councils power to keep the business rates they levy on local enterprise. This will mean that councils in more prosperous areas may well have a huge amount more money to play with, and - crucially - will be allowed to borrow against those revenue streams. The promise of Tax Increment Financing (TIF), widely used in the US to pay for regeneration by borrowing off the back of a future uplift in rates caused by development, is tantalising for many developers, particularly in the commercial sector.

Finch says the willingness to give away power here has “genuinely shocked” councils, but the way it’s being done may lead to problems. He says: “People thought TIFs would be about getting Whitehall to back your scheme, but the way it seems to be working is handing everything over to councils. This means it’s about them using their own money, and it’s likely to be more controversial.”

For the coalition, localism is not a policy option: it’s at the core of its thinking and one of the few areas in which Liberal Democrats and Tories think as one. This means reform can proceed apace. So, whatever very real fears you have over the move, it’s time to start getting used to the new reality. Redfern will not be alone in getting meetings with council chief executives in the diary.