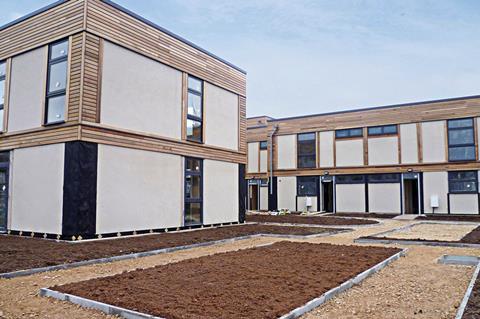 The first of 20 families have just moved into a radical new housing scheme that could be a model for tackling the UK’s housing crisis and carbon reduction targets in one. Located in Bramley, West Leeds, Lilac is the UK’s largest scheme to be constructed from straw bales. It is also a genuinely affordable form of home ownership as someone on £15,500 a year can move into a one bedroom flat on the development for just 35% of their net income.

It is the UK’s first mutual home ownership society with the idea that it provides affordable homes that can’t be sold off for big profits, ensuring the homes will remain affordable for subsequent generations. It is also a co-housing scheme where members share facilities in a co-house, which includes alaundry, communal cooking and eating space, a play area and office space. This cuts energy use and promotes a sustainable community as residents are encouraged to grow food and provide a supportive environment for old and vulnerable people.

The scheme consists of six one-bedroom, and six two-bedroom flats, six three-bedroom and two four-bedroom houses plus the communal house, allotments and a public garden. The £3m scheme is funded by a loan, with residents purchasing a share in the society rather than individual homes. This is broadly equivalent to the build cost of the homes; residents pay 35% of their net income to fund their share. If they leave after three years they get their initial investment back; after three years their return is calculated according to average incomes in the area rather than house values, ensuring the homes remain affordable for locals.

A key driver of the society is social and environmental sustainability, which was the reason it plumped for straw bale homes. “We chose straw for its environmental credentials and because it allowed the community to get involved in the construction process,” explains Paul Chatterton, resident and co-founder of Lilac. Straw bale homes are 25% more energy efficient than traditionally constructed homes built to 2010 Part L and 12.25 tonnes of CO2 are locked up in each house. Another benefit is that the straw and workers were sourced locally.

The homes were built using the tried and tested Modcell system. This is a prefabricated system consisting of load bearing, storey-height square glulam frames up to 4m wide. These are filled with straw and lime rendered on both sides. The panels are taken to site with the ground floor assembled first. Floor cassettes are positioned over the ground floor structure followed by the next storey of panels. The roof structure is also formed from Modcell panels. Craig White, the architect who developed the system, says 16-18 panels are needed to build a three-bedroom house and a two-storey home can be erected in 2.5 days.

Modcell doesn’t have a factory so sets up temporary manufacturing facilities near construction sites. This reduces transport emissions and fits in with the ethos of benefiting local communities. Appropriately, Modcell uses farmers’ barns to produce the panels although the straw bales are not necessarily sourced from the same farm. Small straw bales 1m long, 45cm wide and 35cm high are used; these must be dense and dry.

Glulam sections are delivered in flat pack form and assembled in the barn into frames with stainless steel bars used to brace the corners. Straw bales are trimmed down to 43cm wide using a bandsaw to provide a flat, even surface for rendering. The bales are placed in the frame and built up in layers in a stretcher bond like bricklaying. Once the second layer of bales has been laid, wooden broom handles are driven through the two layers of bales to lock these together. This process is repeated until a small gap is left between the bales and top of the frame. A telehandler is used to scrunch the bales down so the last layer of bales can be inserted into the gap. This means a gap will not open up at the top of the panel as the bales settle down over time. 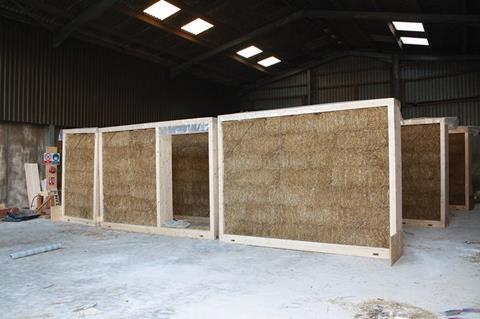 Lime render is used on both sides of the panel as this allows the panels to breathe. Two coats are spray applied and smoothed flat with a day or two between coats. After 10 days the render has set sufficiently so the panels can be transported to site ready for erection. A finish coat of render is applied once the panels are in place. Lilac residents helped assemble the panels in the factory and build the homes on site. 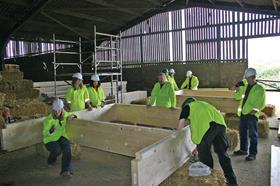 White is now talking to other co-housing groups interested in using the Modcell system. He is also talking to developers about using it for conventional housing projects. Modcell is more expensive than traditional construction - a £20,000 grant per home enabled its use for the Lilac scheme. White wants to get the price of the system down to broaden its appeal. “The aim is to get the Modcell system down to the same cost as conventional construction,” he says. “At the moment the cost is higher but the performance is much better.” Costs could be reduced by substituting the factory-applied render with drylining on the inside and boards on the outside - a coat of render would still be applied on site.

Chatterton says that after some initial caution people signed up for the scheme. “People like the co-operative model as they can see a developer isn’t taking their money as profit,” he says. “Now we are full up, with a waiting list.” He says mutual home ownership will gather momentum slowly because communities need to organise themselves to make it work. It is unlikely to have mass appeal but sky high property prices, cuts in capital funding for social housing schemes, affordable rents fixed at 80% of market rates and growing environmental awareness means schemes like Lilac could become more common.