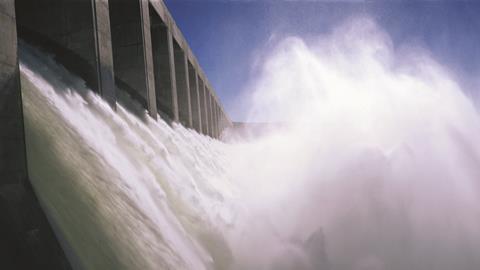 With all the controversy over solar, you’d be forgiven for forgetting that hydropower produces a thousand times more electricity. Building investigates a power source that could light up the industry

What is clean, green, and reliable and provides the greatest proportion of the world’s renewable electricity, yet is all but forgotten as a green energy source? The answer is hydropower which provides 16% of the world’s electricity. In the UK only onshore wind trumps hydro for renewable energy output: last year 3,603GWh of the UK’s electricity was generated using hydropower. Compare that to the measly 33GWh of power generated by photovoltaic panels, now at the centre of a high-profile row over cuts in a government subsidy for new installations.

Hydropower has several plus points; it is more reliable than PV or wind power with power generation only stopping during prolonged dry spells. It is cheaper than PV; a small scale hydropower installation has a typical payback period of seven years. PV had a payback of 11 years before the feed-in tariff cut from 43p a unit to 21p; with that cut the payback period has now extended to 20 years. By contrast the feed-in tariff rate for hydropower is beginning to look generous; remaining at 21p for schemes with an output up to 15kW whereas PV schemes between 4kW and 10kW only get 17p. Does this mark the beginning of a hydropower revolution?

The evidence says yes. The Environment Agency, which licenses hydropower, has seen a massive increase in applications.

“I would say there has been a tenfold increase in the last year or so,” says Steve Naylor, the agency’s hydropower project manager for the South-east. “In 2010 we licensed 65 schemes but in 2008 we only licensed 10.” A month ago the first hydropower scheme to be built on the Thames in recent times, at Mapledurham Estate, started operating and will generate 500,000kWh a year. Work is coming to a close a few miles downstream at Romney Weir, the 1,400,000kWh yearly output is enough to power 300 homes and will supply Windsor Castle. 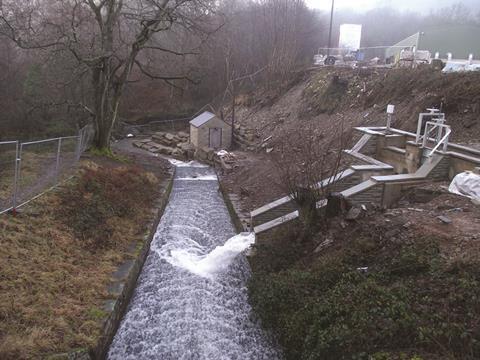 According to a report prepared by the department for climate change in October 2010, the potential is there for many more schemes. Currently 1.3% of the UK’s electricity supply comes from hydropower but there’s potential for another 1%-2%. This additional power could be supplied from a wide variety of sources and could include installing more efficient turbines to existing schemes. There is the potential for several large-scale schemes in Scotland; in 2008 the first scheme for 50 years started operating at Glendoe. This £140m plant has an annual output of 180gWh which is enough to supply 5% of Glasgow’s energy needs. A rockfall in the tunnel connecting the storage reservoir to the outfall at Loch Ness stopped it operating but it is scheduled to reopen next year.

Raising the level of existing reservoirs by a metre or so is another way of increasing capacity and is much less controversial than trying to build new reservoirs. But much of the extra capacity could come from small schemes. These include breathing new life into abandoned mills or adding a hydropower plant to an existing weir.

Another valuable source of power could come from abandoned reservoirs which were specifically built to power the machinery needed for the industrial revolution. Adding a hydropower plant would be relatively straightforward and the power could be used locally to get around the problem of the lack of a grid connection. Many of these are on land belonging to the Forestry Commission and there is a new impetus for them to press them back into service.

That impetus is the Flood and Water Management Act which was introduced last year in response to serious floods in 2007. Part of the act aims to reduce the risk of flooding from reservoir failure and it will take effect in the next year or so. Under previous legislation owners of reservoirs with a capacity of 25,000m3 or more were obliged to maintain them and carry out regular inspections. The new act reduces the cut off limit to just 10,000m3.

“If those reservoirs have to be brought up to some sort of standard, it could be quite expensive,” says Dr Andy Hughes, director of dams and water resources at Atkins. He adds that many of these reservoirs are located in narrow valleys in the uplands of the UK and were built to provide power for machinery. “While that work is being done it makes sense to think about putting in some sort of hydropower plant that could help to meet those costs.”

Natural stone company Forest Pennant is located next to precisely the type of reservoir that will be affected by the new legislation. Owned by the Forestry Commission, Cannop Ponds in the Forest of Dean were built in 1826 to drive what was at the time Europe’s largest waterwheel which powered an ironworks. Modelling showed the 8m head made the scheme viable. It took three years to get planning permission and the necessary consents (see box), and a turbine and associated equipment was installed at a cost of £70-80,000. It produces 50,000kWh per year which meets one third of the stoneworks’ electricity needs. Once the feed-in tariff payment is factored in, this adds up to meeting 83% of the plant’s electricity bill. According to Hughes the original payback period was seven years but with recent energy price increases, he reckons this has reduced to just five. 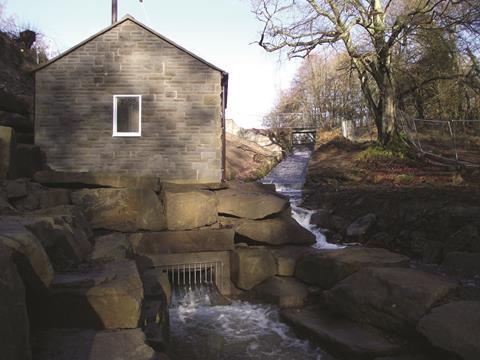 Forest Pennant paid for the plant and will give the Forestry Commission a percentage of the money it saves on bills. Richard Davis, the Forestry Commission’s area land agent for south central England says it typically receives around 10% and wants to see more schemes. “We are keen to promote the idea of mini hydro on Forestry Commission land,” he says, adding this has to be done in partnership with an organisation prepared to pay for the plant. He is working on three other schemes in his area at the moment. The types of organisations interested in developing hydropower schemes include industry and developers doing it for a financial return on the investment, and power companies. Increasingly, groups of householders are clubbing together to pay for a plant that will power their homes. Hughes says he is advising on a scheme in mid-Wales where five houses downstream of a Forestry Commission-owned reservoir are trying to build a scheme.

The main barrier to building more hydropower schemes is the upfront cost and the associated difficulty of getting funding. Payback periods are relatively short compared to other forms of renewable energy but are still too long for the banks. The green infrastructure bank could help once this gets going next year and could help usher in a new wave of hydropower schemes. Hydropower won’t solve the UK’s energy problems but could make a useful contribution with the added bonus of providing some work for the industry too.

How to get permission for a hydropower plant

New hydropower plants need planning permission from the local authority, plus three permissions from the Environment Agency. Getting planning for new reservoirs would be controversial but as most small schemes use existing infrastructure, this shouldn’t be particularly onerous. Even big schemes such as Glendoe in Scotland aren’t particularly controversial as these are largely built underground.

Environment Agency permissions include an abstraction or impoundment licence, needed even though in most instances the water gets put back into the watercourse a few metres downstream. The EA will also want to see a fish pass installed, a dedicated channel allowing fish to bypass a spinning water turbine. Finally the EA needs to be satisfied the scheme won’t pose a flood risk. This means the scheme mustn’t affect the structural integrity of the river bank and that it has been built properly. Schemes may also need a sluice gate to allow excess water through when levels are high to reduce the risk of flooding.

Hughes says he is pleased the EA is trying to make the licensing process easier. “I am encouraged that the EA has appointed a number of people around the country to help streamline the process.”

The different types of hydro scheme

There are two different types of hydropower scheme: run of water and those supplied by a reservoir. The first is located on a river or stream and simply diverts part of the flow through a turbine. The greatest potential for new schemes comes from existing infrastructure such as old watermills and weirs. Getting permission coupled with the cost of building schemes where nothing existed before is likely to be very difficult and expensive. According to the EA’s Steve Naylor, hydropower schemes can operate for nine to 10 months of the year typically, (during high summer low flow rates mean schemes can’t operate). This depends on prevailing weather patterns. In wet years schemes could operate all year round but lie idle for longer during dry years.

Storing water in a reservoir is the other way of generating power from water. The greater the height between the water turbine and the reservoir surface, the more power can be produced. Power can be produced from reservoirs specifically built for this purpose or from drinking reservoirs. The latter are usually built on a river course and a flow of water from the reservoir needs to be maintained so could be used to generate power. Five new storage reservoirs are planned for the UK and could incorporate a hydropower plant.

A variation is the pumped storage plant. These are built to store power generated from other sources which can’t be easily turned off such as nuclear plants. They can also store power generated by wind turbines during the night. Water is stored in a high level reservoir and released when power is needed quickly, typically when people switch their kettles on during the ad breaks in the middle of a popular TV programme. The flow of water generates power and is stored in a second, low level reservoir. The excess power is used to pump this water back up the hill to the upper reservoir. There are two schemes in Wales including Dinorwig in Wales which opened in 1984. This is the largest in Europe and can go from nothing to its maximum 1800mW output in 16 seconds. Two new schemes are being planned for Great Glen area of Scotland and will have an output of 900mW.