While at the EFA, Mairi Johnson was obliged to espouse a design-averse school building programme she didn’t much care for. Now at Aecom, she is fulfilling her ambitions 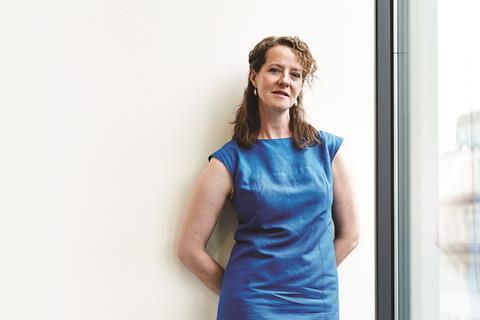 As a six-year-old, Mairi Johnson wanted to be a surgeon – but not, as you might assume, because of a childhood desire to make sick people better. Rather, Johnson explains somewhat macabrely, it was because she was “very keen to cut someone in half and sew them back together again”.

The medical profession, thankfully, was spared her approach to research, but Johnson’s comment about dismantling and recreating has a certain resonance in relation to her recent career. Before joining Aecom as its education lead in January, Johnson was the design chief at the Education Funding Agency (EFA), where she led development of the baseline school designs that have become the basis of the current government’s controversial austerity-era schools. This involved her essentially tearing up the equally controversial, but much more lavish approach to school design that dominated under the scrapped £55bnBuilding Schools for the Future programme - an approach that she also led, during four years as the design head at the EFA’s forerunner, Partnerships for Schools.

Although she could not say so publicly while still employed by the government, the process was a painful one for Johnson, a sparky, engaging woman who talks with enthusiastic rapidity about her passion for “the power of design”. But now, safely ensconced away from Whitehall in Aecom’s Holborn offices, she opens up in startling detail about her regret at the process that led to the new, scaled-back designs that underpin the nation’s new generation of school buildings. And, now on the private sector side delivering those schools, she explains Aecom’s ambitions to grow its presence in the education sector.

From public to private sector

Arriving at Aecom has been something of a culture shock for 44-year-old Johnson, despite the fact that she began her career as an architect in a private practice. The last 12 years of her career have been spent working in the public sector: first at design quango Cabe, where she spent six years and became known as an expert on school design, and then, from 2008, at PFS and its successor the EFA. “Central government is very risk averse,” she says, frowning slightly as she recalls the civil service’s infamous bureaucracy. “Aecom is much more entrepreneurial. There’s much more energy, and faster reaction.”

The immediate factor behind Johnson’s switch from public to private sector was, she says, the completion of the EFA’s design work on the new cost-saving schools. “I thought, actually, if I’m not careful, I’m going to be sitting here with an empty desk.” Aecom appealed because of its international reach and large-scale programmes of work, particularly with overseas governments. “The things I wanted to do to broaden my horizons were things Aecom seemed to be doing, but they weren’t necessarily doing them in education.”

Johnson’s role as global lead for education is a newly created position - and it’s one she is clearly relishing. Aecom’s reach in education spans a wide range of regions - including the US, UK, Middle East, Africa and Asia - but Johnson says “there was no-one pulling it together and making it more than the sum of its parts.” She says that she brings a “client perspective” to the role, and is drawing together Aecom’s multidisciplinary services to provide a more comprehensive offering across disciplines and - if required - across territories, in both schools and higher education.

As well as the immediate prompt of a reducing workload at the EFA, however, there was a longer-term factor involved in Johnson’s move. “One day, we’ll get a government that is interested in design again,” she says bluntly. “And the people that government likes to have around its table as advisers are people that have made it in business.”

The best of a bad situation

The issue of the government’s attitude to design – specifically in education – is a thorny one for Johnson. As the public face of the EFA’s controversial move towards standardised design, she appeared on countless conference platforms to espouse the sense in Michael Gove’s drive for budget schools. But in reality, she says, she found the situation very difficult.

“The Labour government was really into design, and did everything they could to use it as a tool to improve people’s life chances. They believed the school environment was important, and gave children self esteem. The coalition came in and it did not think that. They think all that’s needed from school buildings is a basic minimum standard. And having lived through that change, I belong to the first camp. So it was really difficult to say ‘right, we’ve got a whole new order here - we’ve got to do this’.” She pauses. “It was quite painful, to be honest.”

Some may question why, if Johnson felt so strongly, she continued to lead the programme. But she says that she decided to make the best of the situation by using the creation of new design guidance as a chance to address some aspects of BSF she knew weren’t working - including overlong procurement and poor energy performance of buildings, which had been highlighted in PFS’ post-occupancy research. She says her attitude was: “If the new regime wants to rewrite the rule book, let’s try to rewrite it in a way that it’s not all in ashes.”

Johnson believes that the ensuing environmental engineering work, which is embedded in the output specification now being used by the EFA to detail the technical standards for new schools, will genuinely improve buildings’ suitability. “The schools that come out of the Priority Schools Building Programme will be much plainer architecturally, but actually the ambient environment of individual classrooms will probably be better than the BSF era,” she says.

She also says that although she doesn’t “think we should have baseline designs forever”, she doesn’t think that they were “a huge disaster”. She says: “The baseline design aspect was quite hard, as BSF had really celebrated a school community’s decisions about its uniqueness. But [in creating the baseline designs] we did go back through the back catalogue of BSF, and the schools we thought were good were quite similar. So in that respect I still think it was as good a job as we could have done at the time. And those designs are not compulsory.”

However, there is one alarmingly fundamental aspect in which Johnson believes the government has got its new school standards wrong: their size. Johnson describes area allocations, which are roughly 5% below previous guidelines for primary and 15% for secondary, as “the big flaw” in the baseline designs.

She says: “My big regret of that period is that we took the area down as much as we did. It’s taken flexibility out of the design. Even though every curriculum subject can be taught safely, the circulation is tight, and if the school has any other thing it needs to do, or just a quirk of the building that needs a bit more space to be dealt with, it’s really difficult.”

Alarmingly, given the potential impact on pupils, Johnson claims that the reduction in area was not even properly thought through. “We had Building Bulletins [the previous standards for schools], and my colleagues and I were doing a testing exercise to say ‘what if you set everything at the minimum, what does that give you as an area?’ And that got snatched off the desk and implemented, without any real testing of it.” She pauses, before adding quietly: “I really wish that piece of paper didn’t exist. I wish we’d done a different calculation that got snatched.”

Having realised the problems “quite early on”, but too late to stop the changes, Johnson says her team then tried to build in specific post-occupancy requirements on contractors that could eventually highlight any problems with the size of buildings. These include a walk-around after a year for design-and-build schools, to give “a snapshot of how the school is functioning”, and requiring contractors to report on maintenance costs on PFI contracts (“If a school is used more intensively, maybe it needs painting more often”).

She says: “This feels like a problem to us, but nothing happens in government without evidence. So we tried to stitch in as much as we could that would evidence whether the schools are too small.”

Whether or not time proves Johnson’s concern correct, she is, as you would expect, acutely conscious that the tight funding environment for school building is a big challenge for a country which needs to respond to the fact that, according to the Local Government Association, almost half of school districts will have more primary pupils than places within two years.

However, she also firmly believes that, despite spending constraints, education holds a wealth of opportunities for construction firms, including her own. She identifies higher education as a major area of focus for Aecom: “Universities have really raised their game - as clients they’re now demanding much better quality buildings.” She says this trend is being driven by pressure from students. “The student body is really being asked about the kind of experience they’re having, and that’s a very powerful group”.

Johnson is also among the growing number of advocates of education building projects’ potential to be a linchpin for wider city development. Aecom is working on a large-scale example of this strategy in Cambridge - the university-led NW Cambridge scheme, which includes not just university buildings but 3,000 homes and retail and office space. But she also believes a similar effect can be achieved on a smaller scale. “Education institutions are like anchor tenants in a shopping mall,” she says. “You get footfall throughout the day. If you’ve got a windswept town centre and you get an FE college in it, that’s great, because you’ve suddenly got energy in it all day.”

Johnson believes that expertise in this area is one skill UK companies can export abroad. “We’ve got quite tight cities, so we’re used to weaving between buildings and integrating a campus into a larger city. I think we can take that elsewhere - I hope to, anyway.” She also says that the UK’s technical rigour on school buildings is in growing demand overseas, pointing in particular to standards on acoustics. “I know they’re the bane of everyone’s life here, but these are important things.”

In fact, Johnson believes, education is becoming much more of a global market, with universities in particular setting up networks of campuses across different countries. It’s a trend she wants to capitalise on, but to do that there is one private sector trait she still needs to master.

“I’m amazed by the ability of people here to get off a plane and just carry on working,” she confides. “When I arrive back in England, I just want to go home, but they hurtle forward. It’s awesome. I’m looking forward to gaining that capability.”