John Armitt: ‘Blackouts would be the best possible thing that could happen’

John Armitt says the UK is ‘close to crisis’ on the development of major infrastructure. So no wonder he thinks something radical is called for - and taking party politics out of big infrastructure decisions is just the start. 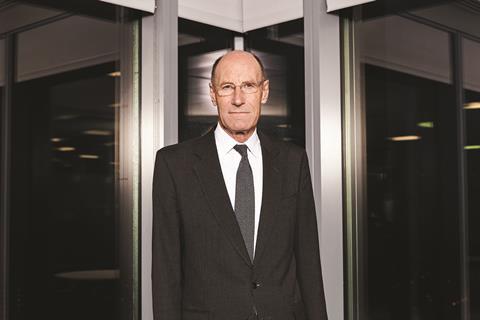 When John Armitt declares that the UK is “very close to being in a crisis” over infrastructure, his is a voice that will be taken very seriously by government and industry. That’s not just because he is the man that delivered one of the most successful major construction jobs in British history, as chair of the Olympic Delivery Authority; or because of his 40 years’ prior experience in construction working at John Laing, and running Costain and Network Rail. It’s also because in the last year his most high-profile task has been to complete a review of infrastructure delivery for shadow chancellor Ed Balls, which reported in September last year.

His review recommended the setting up of an independent National Infrastructure Commission with the remit to decide long-term infrastructure priorities, a formulation designed to take the damaging political insecurity out of major infrastructure construction. Because for projects with long lead-in times and extended and expensive construction phases that cut across five-year political cycles, a lack of cross-party consensus can kill them stone dead.

But the publication of his review comes at a time when from some angles political consensus over infrastructure delivery looks further away than it has been for a generation. HS2 is the most obvious example, with Labour seemingly preparing the ground to withdraw support for the £42bn mega project unless costs are cut. However, the stalemate over airport capacity in the South-east, the snail’s pace progress on the construction of new nuclear power stations, (despite the threat of blackouts from as early as 2015), and equivocation from the coalition over the construction of low-carbon energy projects, are adding to the feeling that the UK is moving in the wrong direction. So with 2014 heralding the start of an extended pre-election period, does Armitt think his vision has a chance of becoming reality? And is he optimistic that the UK will respond to the crisis?

That there is a need for change is not controversial. Armitt cites the fact that the UK hasn’t built a single full-length runway since the Second World War, and the fact Crossrail was first mooted in 1943 as examples of how badly the UK has failed. He also says his plan addresses the issue of financing, with part of the commission’s role to be to recommend financing and delivery routes for major infrastructure - hence Armitt’s well-publicised view that an ODA-type public body should have been set up to build nuclear power stations.

But can solving the problem really be that simple? “Being an engineer, you tend to believe that there ought to be a rational, evidence-based approach to problem solving …” He pauses at this point to chuckle, presumably at the sheer contrast of this to the reality of electoral politics. “This approach tends to appeal to a lot of people - they say, ‘well that seems pretty rational, John’. Well, it’s very different to the world that politicians often live in.” Armitt says the success of the system would be depend upon the credibility of the commission, both in coming to the right assessment of need, and in having the clout to embarrass the government if it was failing to deliver. “As Ed [Balls] used to say, ‘we need something that holds their feet to the fire’.”

The coalition has attempted to address these issues with its National Infrastructure Plan (NIP). Armitt’s review criticised this for lacking a thorough assessment of the UK’s infrastructure needs, calling it “essentially a list of projects” and “not strategic”. But Armitt admits the government has since been making some progress on the delivery of its top 40 infrastructure projects following the appointment of former Locog supremo Paul Deighton. He says the latest version of the NIP, published in December, reflects the conclusions of his report, by containing assertions it follows an assessment of need and a new level of detail on delivery timescales for the top 40 UK infrastructure projects.

Do these changes satisfy him? “It is interesting,” he says. “On the one hand there is a lot of talk about an assessment of need, but if you go to the addendum which is attached to the pipeline of projects, they openly say this pipeline of projects is not an assessment of need, nor does the government give any undertaking that these projects will be delivered.

“When this [NIP] was pulled together three years ago, clearly the word that went out was ‘what projects have we got out there in the different sectors that we could try and bring forward’ - that dreaded phrase shovel-ready - to get the economy moving. It wasn’t because anyone came forward and said there’s a dire need [for these projects]. I think people have always recognised it is a list, it’s not an integrated plan.”
This leaves the UK with management of infrastructure by crisis. “What I’m trying to do of course is have an infrastructure programme which largely moves along immaterial of crisis.”

“We are very close to being in a crisis when it comes to energy. Ofgem, who are the experts, say the excess capacity is just 4%. The Central Electricity Generating Board used to say that a resilient network operated on a 25% capacity surplus. [But] we’re down to 4% because we’ve gone slower than we should have done on nuclear. In harsh political terms [blackouts] would be the best possible thing that could happen, because this country is extremely good in a crisis.”

Armitt says there is a similar problem with water infrastructure, with providers such as Thames Water close to failing to meet demand peaks because of a lack of reservoir capacity. Thames Water’s chief executive Martin Baggs “struggles to get anyone to accept that extra reservoir capacity needs to be built,” says Armitt.

However, for some the credibility of Armitt’s proposals has been undermined by Balls’ own politicking on HS2. Despite Armitt’s report being presented as a way to take party politics out of major infrastructure, Balls made a point of withdrawing unconditional Labour support for HS2 in the week Armitt’s report was published, saying a Labour government would look hard at whether the project was value for money before deciding whether to go ahead. Surely this is an example of exactly the kind of partisan political manoeuvring that has been so damaging to the infrastructure debate? “If you’re a Labour Party shadow chancellor who is regularly being accused of being too free with the public’s money when labour was in office, you are going to need to demonstrate you’re going to be careful with money in the future.” Armitt says, refusing to criticise him. “Saying ‘we’re going to want to make sure it’s value for money,’ - you could say ‘he would say that’.”

There is also a question as to whether the very idea of a plan to tackle the lack of political consensus on major infrastructure can be developed by just one political party. The response to Armitt’s proposals from the current government has been muted to say the least, with one official working in this area telling Building that because of the report Armitt’s is “the name that must not be mentioned” in the corridors of Whitehall. Armitt is unapologetic, countering that he made attempts to secure cross-party input to the review, and that silence from the government benches is better than criticism.

The reality of political life today is that George Osborne is not going to stand up and say ‘this bit of work Ed Balls has commissioned is fantastic’.

“I went to one or two people in the Conservative Party and said ‘would you like to join me in doing this and be part of the team?’ and they, after consultation with the party, said sorry, they were unable to do so.”

But the questions remain over whether Armitt has allowed himself to become politicised by aligning himself with such a divisive figure as Balls, thereby reducing his review’s impact. “[The Conservatives] haven’t actually come out and said this is a rubbish idea. The reality of political life today is that George Osborne is not going to stand up and say ‘this bit of work Ed Balls has commissioned is fantastic’. It’s an unsatisfactory place to be, but it’s not totally unexpected.”

While for now Armitt is working with Labour, he is not beyond criticising the previous governing party, saying it should share some of the blame for the current impasse over the construction of low carbon energy generation capacity. “The need to invest in green infrastructure is a direct consequence of what you could argue was not a properly informed judgement in the first place. You sign up and you commit yourself to a Climate Change Act, and CO2 reduction, without properly understanding or explaining to the electorate what the financial consequences are going to be. [The] chickens are coming home to roost…

“It is very important there’s a better public understanding of how important infrastructure is and how much of a mess their lives would be without it, to give the politicians the chance of meeting not just outright abuse or opposition when they come forward with projects.”

Armitt’s plan would see his National Infrastructure Commission set up by Act of Parliament to assess the UK’s infrastructure needs over a 25-30 year time horizon, with a new assessment to take place every 10 years. This assessment would be submitted to the chancellor and approved by a vote in parliament, at which point both the current government and any succeeding ones would be bound to implement its conclusions. Therefore, it would take another vote in parliament to overturn it. After that, specific sector plans would set out the actions needed to implement the assessment, both in terms of identifying individual projects and the funding and delivery vehicles needed to get them built. The infrastructure commission would then independently monitor the effectiveness of the government’s implementation of the conclusions, in the same way that the Committee on Climate Change does with the 2008 Climate Change Act. Balls has since asked Armitt to draw up a draft white paper and legislation to implement the recommendations if Labour is returned to power in 2015.

A trained engineer, Armitt’s day job for the ODA is overseeing the closing out of contracts on the Olympic Park and the transitional works needed to hand over the Athlete’s Village to its owners in legacy, Qatari Diar and a consortium of housing associations. However, Armitt, who was knighted in 2012, has increasingly worked in the political sphere in recent years, negotiating the deal between the ODA and the Labour government to develop the Village in 2008 when Australian developer Lend Lease backed away from funding the project. Armitt, who says he enjoys working on the interface between construction and politics, doesn’t rule out the possibility of becoming a member of the House of Lords in future, though he denies he is planning this. “I’ve actually never planned my career at all,” he says. “I wouldn’t rule it out [a peerage]. If someone were to suggest it, I would give it consideration.”