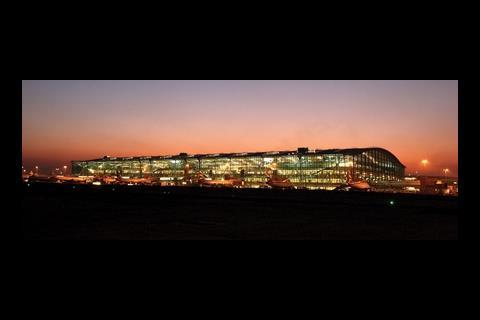 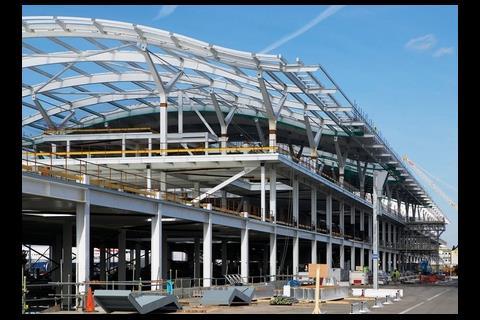 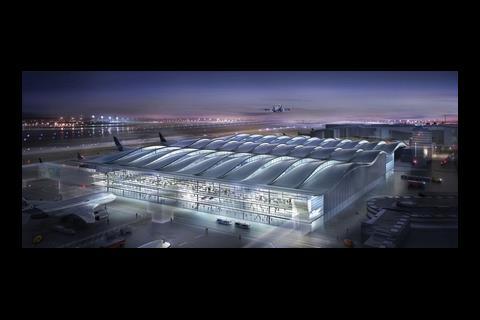 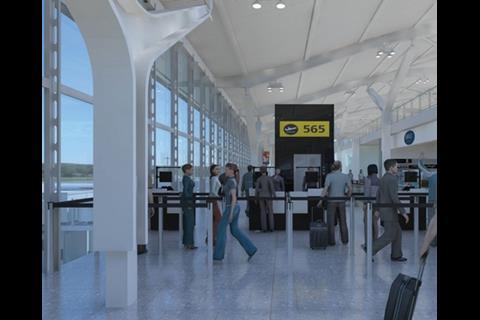 In the glory days of Terminal 5, BAA seemed to be leading construction into a new golden age of peace and prosperity. One takeover and a recession later, that’s looking unlikely. Dan Stewart assesses the future for a key client, and on page 42 we canvass two rather different views on Heathrow’s third runway

One year on from the opening of Heathrow Terminal 5, it is clear that most of the claims made for it before it was built have been fulfilled. It was indeed a demonstration of what a modernised, rationalised, Eganised industry could do.

The famous T5 agreement gave BAA the project risk and integrated all 90 first-tier suppliers. Industrial relations were assured with lavish wages, excellent working conditions and bonuses to reward productivity: a skilled operative could earn as much as £55,000 a year. BAA also worked with its main contractors to make the most of off-site manufacturing and state-of-the-art logistics. All of these initiatives showed a client that understood how enlightened self-interest required a different kind of construction process.

But one hope has not been fulfilled. The project was to mark the start of a new kind of industry, and BAA was take what it learned at T5 and use future schemes to show clients everywhere the wonders it could work. That prospect is now looking increasingly remote. Saddled with £22bn of debt after its takeover by Spanish contractor Ferrovial in 2006, BAA is now focused on cutting costs; one senior source says: “Costs are too high and have to come down otherwise projects won’t be happening.” BAA may still be the industry’s biggest client, but its attitude to the construction industry is looking decidedly ordinary.

What’s in the pipeline

BAA has a forward construction programme of £6.6bn, and although the Competition Commission’s ruling last week that it must sell off Gatwick, Stansted and either Edinburgh or Glasgow means that not all of the future projects at these airports will be run by BAA, the Civil Aviation Authority will still require them to be started (see box, below). What is more, those airports’ new owners will be required to carry on BAA’s construction programme. Although there will be no requirement to use BAA’s framework contractors, sources say that the operator has assured them it will do its best to ensure that they continue to do the work.

Heathrow, the airport that BAA will definitely keep, is by far the biggest recipient of its capital investment. The airport’s current development plan, which runs from 2008 to 2013, has a budget of just over £4bn. This includes the £1.5bn East Terminal phase one, which is to be built by Ferrovial and Laing O’Rourke, together with a series of smaller projects (see box, below).

This is the most important single project. A year ago, a former director of BAA, who did not want to be named, told Building that the “key indicator” in understanding how the company would operate in future would be Heathrow East, also known as Terminal 2a. Those were ominous words, because the project has fallen behind. The disastrous opening of Terminal 5 meant that plans to empty Terminal 4 had to be delayed, and that meant the demolition of that building, required before Heathrow East could be built, has been delayed for six months, from March to October this year.

Sources close to the scheme predict that the opening of the first phase of Heathrow East, originally planned as a gateway for the 2012 Olympic Games, will not be possible until the end of 2013 at the earliest.

Phil Wilbrahams, project leader for Heathrow East, cannot yet confirm an opening date for the first phase of East. He says: “We still don’t have a fixed plan. If you look back to T5, we only determined a completion date when we were six months into that programme, so we’re not ready for that yet.” The only commitment he would give was that Heathrow’s entire £4bn construction programme would be complete in 2013/14.

Plans for a third runway and sixth terminal at Heathrow have been approved, but have attracted a level of opprobrium worse than that levelled at T5

Wilbrahams says the two years after that will be critical to deciding how much BAA will spend on Heathrow during its five-year plan. This will, in part, depend on how much it gets from the sales of Gatwick and Stansted. But he adds that there is plenty for the construction industry to do before then. “We’ll be building Heathrow East phase two, which will increase the building to the size of T5. There is potential for a further satellite pier, or a terminal pier. There are also plans to further refurbish Terminal 3, which may include a new pier, and improve the transportation system,” he says. “And of course there is the third runway.”

Plans for a third runway and sixth terminal at Heathrow have been approved by the government, but they have already attracted a level of opprobrium worse than that levelled at T5. At the very least, they will be subject to a lengthy public inquiry, and Boris Johnson, the mayor of London has said he will fight them in court.

Wilbrahams concedes that a third runway will be unlikely to be completed during the 2013-18 period – “There is quite a process to go through before we can consider a timeframe,” he says – but adds that there will be plenty of environmental, architectural and infrastructure work to pave the way for its construction.

But despite the obvious opportunities, with Gatwick and Stansted sold, and BAA’s Scottish airports unlikely to warrant redevelopment on a grand scale, it is unlikely that there will be as much work for BAA’s supply chain as there was before, and this is contributing to its present drive for efficiency and reduced costs. This drive began after it was bought by Spanish contractor Ferrovial in June 2006, a deal that left it with about £22bn of debt. Since then it has made a £1.3bn loss, thanks to a massive writedown of its property portfolio as the economic crisis worsened. Although Ferrovial refinanced its debt last June, the burden weighs heavy on BAA’s ability to spend money with the confidence it did on T5.

Sources close to the company predict that, before the end of 2009, BAA’s complex built integrator framework – the framework of nine contractors that carry out its major building projects – could be reduced.

One says: “Even though about 70% of BAA’s work is at Heathrow, there won’t be enough work for nine companies. The framework will be cut back to four or five.”

In fact, the role of this framework is already changing. BAA, which on T5 had a large team of in-house construction staff overseeing work by main contractor Laing O’Rourke, let more than 200 project managers go in January 2008.

As a result, the main contractors now run BAA’s main projects without continual guidance from the client’s in-house team; rather they have reverted to the traditional client–contractor relationship rather than one where the client was acting as a construction manager.

These are difficult times. We’re committing to spending this money, but we are going to spend it more wisely

Wilbrahams acknowledges the shift: “On T5, BAA had more than 100 first-tier suppliers, and we were managing all those relationships ourselves. We’ve worked with these guys for a long time and we’re now in a position to get the right people managing the right risks.”

In addition to the departure of the project managers, the stream of senior departures that began shortly after Ferrovial bought the company has continued. This means that most of those with experience of the construction processes on T5 have now left. Andrew Wolstenholme, the head of capital projects, left in October to head Balfour Beatty Management. Other high-profile figures to leave in recent months include David Bartlett, the head of design, who moved to Lend Lease in December.

The consultants’ frameworks are due to be retendered before the end of the year, and it is likely that these will also be reformatted to address the “new reality” of how BAA works. According to one source, “It will have a different emphasis. It will be much more geared to deliverability and value for money”.

In another change, sources close to the company say the Major Projects Agreement (MPA), which offered generous rewards to productive electricians, is unlikely to ever be repeated. “It will never do that again – not with the debts it’s got, and certainly not during a recession,” says one source. “Laing O’Rourke tried to sell the MPA to projects in Ireland and in the Middle East, but it never took off. It’s dead in the water.”

Finally, the Ferrovial takeover may also throw up some additional problems for contractors. There have been persistent rumours of tensions between Ferrovial and Laing O’Rourke, who are building Heathrow East terminal together. The Spanish contractor, which controls 65% of the joint venture, took the designs by Foster + Partners and handed them to its own executive architect for value-engineering. Laing O’Rourke was understood to have been left out of the process.

Although BAA’s less evangelical, more practical approach is unlikely to win many plaudits from those who hoped it would continue to pilot the reform of the construction industry, there are some beneficial effects for the industry.

Mike Peasland, group managing director at Balfour Beatty, one of the firms on the complex-build framework, says the hands-on approach BAA used on T5 is unnecessary now that its main contractors have proved their methods of working are reliable. “BAA is not self-contracting, which is what it did before,” he says. “Its main contractors know what they’re doing, so it will let them do it. It has become an intelligent client, rather like Network Rail and the Highways Agency.”

Wilbrahams is also keen to stress that the client is not going to ignore its construction responsibilities. “Look, we’re not going to just turn our backs on our work. We’ll be taking a full client role [on Heathrow], it will just be in a different way to T5. These are difficult times. We’re committing to spending this money, but we are going to spend it more wisely. There is the opportunity for us to do things cheaper and faster. We are still dedicated to this industry: £800m a year is a significant workload in anyone’s books.”

There is also the possibility that the drive for efficiency could lead BAA to more innovations. Colin Matthews, its chief executive officer, gave a hint of this in a speech to the Movers and Shakers breakfast in London last week. He said: “We want to raise professional standards and cut costs by better quality design and by the integration of construction and design. We need to be doing it better and more cost-effectively than before.”

What is BAA building?

Who builds for BAA?