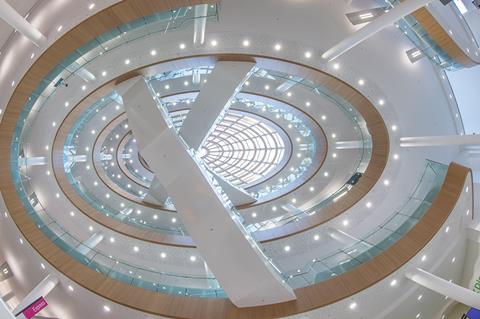 Today a new chapter in Liverpool’s proud civic history opens. Liverpool Central Library, Britain’s first purpose-built public lending library, reopens after an extensive three-year £50m refurbishment project. Designed by architect Austin-Smith:Lord, the new library provides five floors of accommodation, an archive repository with capacity for up to 20 years of expansion, a state of the art conservation studio, a public roof terrace and, crucially, celebratory public areas and entrances for the first time in over 60 years.

All of this is intricately stitched into a restored historic fabric dating back 153 years that forms part of a Unesco World Heritage Site and contains the UK’s first circular reading room based on architect Sidney Smirke’s iconic 1857 original at the British Library.

Over the following years, much of this laudable historic pedigree was brutally obscured by intensive post-war redevelopment that left the old library with chronic problems. It was impossible for anyone familiar with the building’s former state not to marvel at the fact that lurking behind its noble neo-classical facade lay a mean, dingy warren of narrow galleries and sullen reading rooms with no perceptible entrance or route by which to navigate them.

As with so many of the physical anomalies still hidden within urban Britain today, the reason for this startling disparity lies with the Second World War. Like much of then-industrial Liverpool, the original library - save for its facade - was savagely bombed in the forties. Consequently, the new building constructed behind the august preserved frontage was an impenetrable and uninspired assembly of corridors and storage that dated from the fifties and seventies.

But this unfortunate historic circumstance was of little comfort to the generations of intrepid readers who sought intellectual sanctuary within its inclement confines. By the early 2000s, conditions within the building had deteriorated so sharply that Joyce Little, head of libraries at Liverpool council, would satirically instruct visiting government officials seeking direction to the decaying archives to “smell them”.

Little is clear about the five key aims for the library’s redevelopment that formed the project’s brief. “We wanted a new visible entrance, new public library spaces, a new archive repository with appropriate temperature and humidity control, we wanted to open up historic areas for public use and we wanted to make the library a destination for the first time.”

The PFI route is not without its detractors and design excellence is rarely a consequence with which it is commonly associated. But while Little sympathises with the enormous amount of work prepared by the losing bidders and laments the inordinate amount of time the entire process consumed (first PFI credits were awarded almost a decade ago), she passionately maintains that rather than dilute design quality, PFI provided the “certainty and transfer of risk” that safeguarded the design concept and ensured that Liverpool, as the client, knew exactly what it was getting. 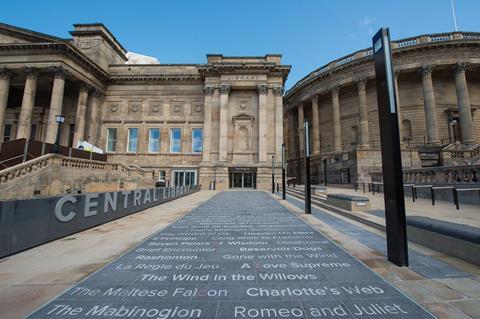 New landscaping helps identify the library entrance. This is flanked by the World Museum Liverpool (left) and the Picton Reading Room (right)

Outside with the old …

The original Liverpool Library was designed by architect Thomas Allom and opened in 1860. It is conceived with the signature heavy presence and weight of Victorian neo-classicism complete with deep entablature and monumental entrance staircase. Oddly, the library only occupies the part of the building to the right side of the central portico with the World Museum Liverpoool occupying the rest, usurping classical symmetry in a manner akin to a hotel being secretly housed to one side of the balcony at Buckingham Palace.

Accordingly, the main entrance is not via the grand central steps but through the plinth of one of the side accent wings, a lopsided insurrection that contributed to library’s ambiguous identity during its wilderness post-war redevelopment years. In 1879 the library was extended to the right by the addition of Picton Library, a magnificent colonnaded rotunda housing the domed Picton Reading Room and ingeniously conceived as hinge that subtly disguises a shift in axis along the street. 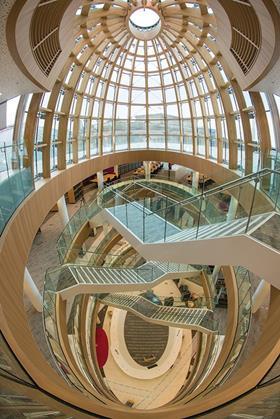 On either side of the library extends a spectacular complex of conjoined Victorian classical buildings that form Liverpool’s second-finest urban set-piece after the iconic Pier Head on the Mersey. The continuing symbolic importance of this site was reaffirmed last month by the unveiling of the memorial to the Hillsborough tragedy just yards from the library entrance. And right opposite the library is the stunning St George’s Hall, arguably the world’s finest Greek revival building.

“Obviously, on a site as important as this, the outside of the building had to look pretty much the same as before,” explains Little. “We worked closely with English Heritage and conservation bodies who were very supportive of the scheme.” So while the stonework on the facade has been lovingly cleaned and restored, the frontage bears no trace of the radical transformation that has taken place within.

There are some clues, namely a wonderfully crisp hard landscaping scheme which features svelte lighting columns; a book deposit receptacle that has been deftly inserted into a rusticated side retaining wall; a low, outstretched granite plinth bearing the library’s name and beside it, famous works of film and literature inscribed onto a granite path that unfurls from the library entrance like a ceremonial stone carpet. But it is not until one gets inside that the true heart of the new library is dramatically revealed.

… inside with the new

Once inside the visitor is greeted with a narrow vestibule space that extends the full height of the building and is flooded with light from above. It is here that the structural conceit of the new library is fully revealed: the interior is in fact a brand new self-supporting concrete box that has been pulled away from the historic facade. The vestibule forming the gap between the two therefore ensures that the facade is not load-bearing and supports nothing but itself. It also enables the new internal levels to be freed from the restriction imposed by the position of the existing windows.

But it is beyond the vestibule where all traces of the historic exterior are finally wiped away.

A soaring elliptical atrium rises up the building’s full height, emphatically dissected by an erratic web of staircases and generously top-lit by an ocular glass and glulam dome. Glass balconies encircle the atrium, revealing snatched glimpses of the open-plan spaces beyond and the void is framed by leaning columns inclined as if to arrest the swirling motion of the vortex-like chasm they embrace.

Closer scrutiny does reveal the inevitable presence of PFI parsimony. There is rather too much perforated acoustic ceiling panelling on display, the carpets reveal a municipal brio that would not look entirely out of place on bus upholstery and while the wood veneer that faces the exposed floor slabs does a good job of complementing the dome above, it also, ironically, reveals how predominantly and conventionally white the interior is.

But these are small blemishes rendered all the less important by the innate melodrama of a swirling, enigmatic space whose funnelling form reflects the sense of imagination and aspiration unlocked by literature itself. As Little explains, the atrium was a key part of satisfying the brief. “No one is actually forced to go to a library; it’s not like other public
service buildings like a hospital or a school.

We wanted a reason for people to come, we needed a wow factor.”

The other chief highlight of the new building is a spectacular public roof terrace that reveals exceptional panoramic city views. This area surrounds the dome and also makes clear how the new dome is a contemporary interpretation of the bulbous form of the larger Picton Reading Room dome next door.

Away from these stellar centrepieces, the new spaces can afford to be more measured but just as effective. A stylish public cafe is located by the entrance and the spacious interiors with their informally arranged bookstands and splashes of brightly coloured furniture occasionally resemble a bookshop more than a library. Little reveals that this more relaxed character is based on a colour-coded “new service concept” that aims to render the library experience more accessible and intuitive. 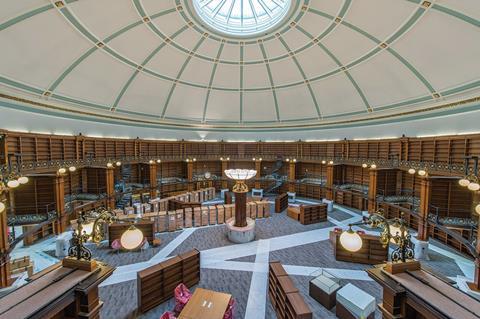 The consolidation of the library’s new interiors with the historic ones is a transition that is handled masterfully. The magnificent Picton Reading Room has been meticulously restored, as have the Oak and Hornby Libraries, the former in particular being a sumptuous, vaulted baroque chamber criminally concealed from the public for decades. But what is important spatially is the seamless manner in which these historic interiors are accessed from the new, with new built interventions gently interlocking with the old fabric and visitors able to flow between the two unimpeded, as was once the case, by impenetrable level changes and labyrinthine passages. 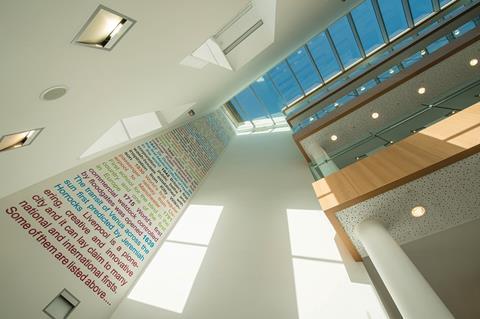 A narrow, roof-lit vestibule divides the new structure from the historic facade 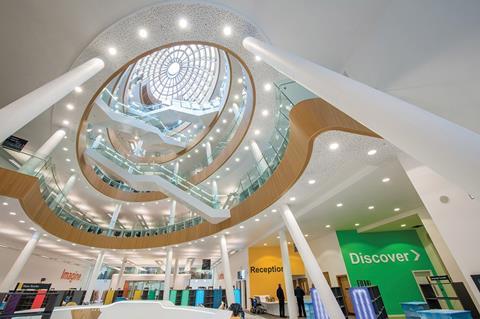 There appears to be something of a schism emerging in the political patronage of libraries at present. While austerity cuts are forcing many local authorities to close, or at least to consider closing local library branches, central libraries in cities such as Manchester, Worcester, Birmingham as well as Liverpool, are being lovingly and ambitiously rebuilt and appear to be one the few flourishing aspects of a harassed public sector.

This is also a uniquely provincial renaissance. While many English cities boast monumental central library buildings commonly erected by proud Victorians as majestic civic temples, London, with its municipal administration fragmented across 33 fractious boroughs, has no city-wide equivalent.

Perhaps as the fortunes of local libraries wane, the prospects for their centralised equivalents will grow. If this is the case, then Liverpool with its combination of sensitive historic engagement and contemporary spatial drama, serves as an impressive and cost-effective municipal template to export to the rest of the country. It also proves that PFI, a procurement process that has rightly suffered savage design criticism, need not necessarily lead to the anodyne architecture that it far too often seems to induce.

No one is forced to go to a library, it’s not like other public service buildings. We wanted a reason for people to come

But there is a final element that makes the new Liverpool Central Library work and this arguably is the hardest one for new buildings to achieve. Few UK cities exhibit the levels of raw civic pride and fierce local allegiance found in Liverpool. While Londoners passively see their public buildings as national monuments, Liverpudlians passionately revere their own as native emblems.

In a city where the iconic Liver Bird is as recognisable a symbol on buildings as the Union Jack, architecture is elevated from the confines of function and fabric alone and becomes a potent and poetic expression of civic identity.

There are obvious ways in which the library satisfies this demanding civic brief.

A four-storey wall in the entrance vestibule is inscribed with historic Liverpool “firsts”. Another full-height wall on the new archive repository block has famous Liverpool quotes preciously inscribed in large gold lettering. And yet another wall on the exterior of this block features names of eminent Liverpudlians through history.

But inscribing text, or Liver Birds for that matter, onto walls, is easy. In a city with such a harsh recent history of municipal neglect, a public building that celebrates its strong social conscience by recalling its proud past to help define a more aspirational future is what truly integrates this new building into its rich local fabric.