Clients, being generally large and with sharp teeth, have been pushing their weight around since the recession began. But despite some dangerous swipes of the procurement tail, many have come to realise that they need contractors just as much as contractors need them

Since the economic downturn began, the balance of power has shifted irrevocably in favour of the client, and nowhere more so than in the area of procurement. From BAA’s dramatic overhaul of its framework system - a move eagerly emulated by other clients including the Ministry of Defence and BT - through to the almost unquestioning contractor compliance to client demands, it’s clear that clients now have suppliers wrapped around their little finger.

The days when contractors could luxuriate in minimal risk and maximum prices are over. But the consequences of this power shift go further than that. A Chartered Institute of Building (CIOB) survey of 525 contractors shows that most companies believe that cost and time overruns on projects are often down to the procurement route, a situation likely to be exacerbated by tougher relationships with clients.

With 2011 looking set to be even harsher than 2010 for the construction industry and the full effects of the public sector cuts expected to take hold, contractors are increasingly keen to ensure that relationships with clients, while inevitably more demanding in the economic climate, are kept sustainable. But do clients realise that when the upswing finally comes, they will need to have a supply chain still willing to work for them?

Research conducted by the CIOB and revealed exclusively to Building, (see graphs), found that contractors feel the method of procurement is essential to the smooth running of the project, with 87% agreeing that good procurement is always synonymous with a successful scheme. Perhaps even more tellingly, when the CIOB asked the contractors about projects they had worked on which had overrun on cost, 57% said the procurement route had contributed directly to it. Similarly, when asked about projects that overrun in terms of time, 49% put the delays down to the procurement method used. And some 77% of contractors believe clients have an insufficient understanding of procurement. So what do they feel are the consequences?

Andrew Laird, commercial director at Wates, says that since the downturn began clients have favoured one type of procurement above all: single-stage design and build, which clients feel minimises their risk because it gives them a fixed price - that risk is, of course, pushed on to the contractors.

Alongside this, clients have been brushing aside established frameworks in a quest to find better prices from new suppliers. Laird says: “You do despair a bit when you have jumped through various hoops to get onto a client’s framework - demonstrating key performance indicators, best practice and so on - and then you find the client is now just going for the lowest price.”

Laird says the problem with single-stage tendering is that it stores up problems for later. “The secret to a successful project is to use a procurement method that engages both consultants and specialist contractors early,” he says. “This means you all work together to identify and iron out potential problems early.” 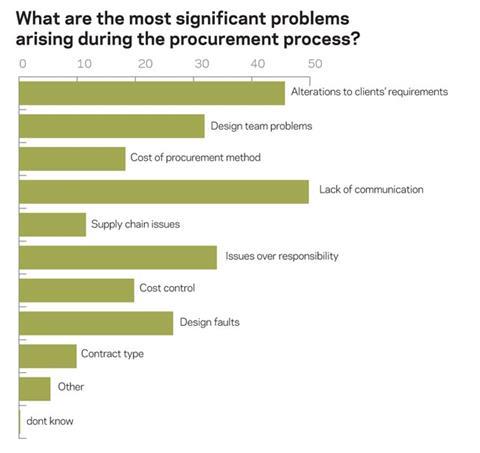 Because single stage doesn’t allow this to happen, he says, “there is not enough time to properly assess the job and if it all goes wrong, this is usually manifested in cost problems, possibly leading to insolvencies among the specialist contractors.” Of course, if the subcontractor goes under halfway through the job, this can threaten the entire programme, especially if the subbie is performing a highly specialised job.

David Fison, chief executive of contractor Osborne, says that since the downturn began there has been more competitive tendering and fewer frameworks in both the public and private sectors: “I think the industry, including ourselves, was slow in realising that to retain frameworks they would need to lower their prices - especially when clients saw us using the savings we were making from being on frameworks to lower our prices elsewhere in the market.

“However, now I’m nervous about the pricing of competitive tenders because it tends to mean contractors are picking up troublesome jobs at increasingly low prices. In these situations main contractors have a habit of trying to claw back money from specialists but since they are now stretched to the limit, it’s much more likely that disputes will erupt.” 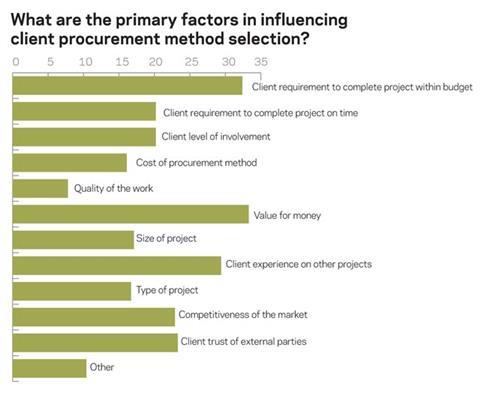 The top bugbear of the contractors in the survey was PFI/PPP, which most said was the procurement approach in greatest need of restructuring. As ever, the cost and time of competing and tendering is what frustrates. Laird says: “To get a proper price requires detailed design, which is costly, so I think this should happen at a later stage.”

And the pain of PFI has increased since the government began cancelling projects as part of the cost-cutting drive.

So what do contractors think needs to be done to make relationships with both public and private sector clients more sustainable? Laird argues that, contrary to what clients sometimes think, a two-stage approach can save them money. “On some of our two-stage jobs, just when the downturn was starting we were able to work with the team to bring down costs by millions.”

Osborne’s Fison has some thoughts on what government clients, specifically, could do to improve the procurement process: “Do clients know enough about procurement? Usually, no, because most aren’t experts, he says. “Most only procure a few things in their lives.

“However, government procures all the time. This gives it the experience and maturity to be able to take risks and innovate. The best it could do would be to simplify procurement to make it more efficient and cost effective for everyone - and that would save costs for the government itself, too. For instance, a railway project might have five different designers before it even gets to site - that’s madness. Unfortunately, though, governments operate on the principle that they must avoid criticism and risk above all, so it’s unrealistic to think we’ll see any radical change of approach to procurement.”

What the clients say

Some clients argue their tough new regimes are working. Nigel Keen, Waitrose’s head of property, says: “The cycle we’re in at the moment means it’s dead easy to get good value for money and to get the best people working on your projects. The real test will come in the upturn. Our strategy is to make sure the supply chain recognises the value we bring during a downturn to ensure we are still seen as an important client when things improve. Also, pitching the right work at the right level is vital. Just because large contractors will take smaller jobs now, doesn’t mean they’ll be keen to do them in the future.”

Sarah Ellis, procurement director at BAA, which has been one of the highest profile clients to do away with pre-downturn frameworks, says that the resulting increased competition benefits both client and contractors. “Competition drives greater value for us but it also helps new suppliers come in. We want more competition between contractors and we see this as part of being an intelligent client.” 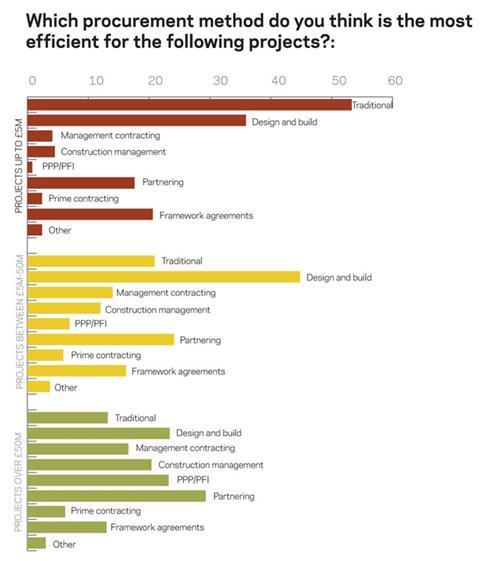 Does Ellis worry about so-called suicidal bidding? “During the tender process we ask questions that will establish whether people are able to do the work.”

Vinod Thakrar, Hammerson’s head of project development, adds: “We believe that transferring risk to the main contractor by using a single-stage design and build contract means handing risk to the best person to handle it. It’s ideal for us because we know the price upfront. Of course it’s tough for the contractor but it’s tough for everyone at the moment … Single stage always comes with the risk that the whole project will see adverse effects, including us, the employer, but this is a risk one has to take. We can at least minimise it by specifying as well as we can.”

David Chambers is the head of Lindum, an £80m turnover contractor in the Midlands.

“Single-stage design and build has become much more prevalent than it was a few years ago, especially in the public sector, simply because price has become more important and this approach prioritises price over quality.

“We can live with it but we do have a big problem with novation [when the architect is transferred from contracting with the client to the contractor under a D&B contract] because you tend to find the architect has no interest in helping you. This can leave you with problems such as some of the materials not working, which ends up costing everyone money and time and leading to disputes.

“But D&B probably accounts fo about half our work, the rest is traditional procurement.

“The procurement route depends on the client and how badly they’ve been hit by the downturn. For instance, retail has been holding up better than industrial. Certain of our clients, like Morrisons, have been great.

“When the market picks up, it’s likely that the power will shift back to contractors. I don’t see a return to traditional procurement but I do expect to see less emphasis on price and - frankly - greed, and more common sense.”

The Ministry of Defence insists that despite the tough environment, it wants to work with contractors rather than against them, especially as they see this as the key to innovation.

Steve Rice, head of the Next Generation Estate Contracts programme, says: “We need to work closely with contractors to manage uncertainty and change. Industry is often better placed than its government customers to propose innovative ideas to meet new requirements and targets. On energy, for instance, we want to see suppliers investing in innovative green technology to rationalise the MoD carbon footprint.”

He adds that he wanted to ensure small and medium-sized companies are involved. “We recognise the value SMEs have in generating economic growth. We want to give them the opportunity to compete on a level playing field for construction opportunities and would also like to see them considered as potential supply chain members.”