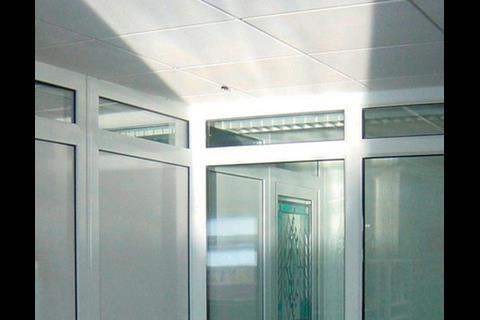 A plastic film is sandwiched between glass panels to make the louvre. The film collects light and redirects it on to the ceilings inside 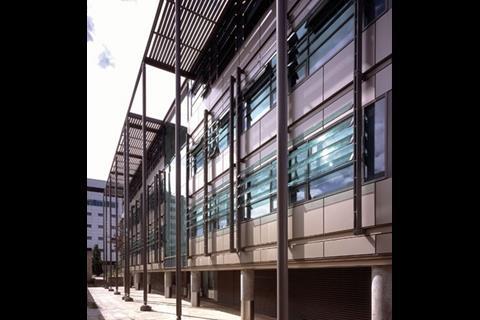 Daylight improves productivity and wellbeing in the workplace, so theoretically it could help the brainwork at Edinburgh University’s new science facility. But how do you get a good helping of daylight in grey Scotland? Jan-Carlos Kucharek reports on an innovative brise-soleil

When architect Hurd Rolland was appointed by Edinburgh University to design its science facility, the brief called for an environment-friendly, low-energy building. So the new Alexander Graham Bell facility is fitted out with the latest in passive ventilation technology and facade-integrated photovoltaics.

But it didn’t stop there. “The university was explicit in saying that if it was going to attract the best research academics, it was going to have to provide the best environment in which to conduct their research,” says Alan Clyde, partner in Hurd Rolland.

With studies pointing to the fact that daylight increases productivity and wellbeing, the university was keen that this be made a key design factor. Which, given the low light levels of Edinburgh’s glowering skies, left Hurd Rolland with something of a challenge. In the first application in the UK of this technology, the firm specified a light-reflecting external brise-soleil running across the glazed areas of the facade.

The louvres, developed with solar shading specialist Levolux, are a sandwich of glass filled with an innovative plastic film called Serraglaze. The plastic effectively acts as a prism, collecting light and redirecting it on to the internal ceilings of the research spaces.

“We were looking at means of creating higher levels of natural light internally, which did not create glare or increase solar gain, and the Levolux system did all of that. However, at the time, the system was untried, so our design was a pilot project,” says Clyde.

“The glass of the louvre acts as a UV filter, cutting out the medium wave UVB radiation and the heat component. The acrylic interlayer did the rest by directing the light up to where it was needed.”

Serraglaze comprises two ultra thin acrylic sheets with tiny prism-like holes in them. These are glued together, which creates tiny air pockets between the two sheets. The air pockets, called “lamellae”, are four times narrower than a human hair, and cause the plastic to act as a mirror, refracting and reflecting light as it passes through the cavity.

The film distributes light evenly in a room if directed at a “repeater station”, such as a white ceiling. Its makers claim that in independent testing, the daylight component of rooms can be increased by up to 40%.

Of course, the proof is in the performance. David Somervell, energy and sustainability manager in the estates division of Edinburgh University, is pleased with the effect the brise-soleil has had on the working environment. He says: “On a bright day with scattered clouds, we have a situation where the light directed in is so substantial that the room is bathed in it, even at the back.”

And if it isn’t a bright day? “When the clouds pass over the sun, the result is that there is a shift to relative darkness. From an energy management point of view, this is an issue, as you find that researchers are leaving their desk lights on to compensate for it,” he says.

Somervell is not casting aspersions on the product – the project team investigated an adjustable louvre proposal that would have mitigated this effect and dismissed it on cost grounds. But it does lead him to conclude that the louvres should be linked to a responsive lighting system, with a finely tuned building management system, which can react quickly to the changes in light levels as they occur – an option he is currently looking into.

There have been other benefits. While not formally audited yet, Somervell says the university is pleased both with the design strategy and energy performance of its new research facility. The researchers love it too; so much so that they have just built a similar building, the William Rankin block, next door. And while Somervell admits that they are still ironing out the problems, their decision to go with an untried technology has, on the whole, been a success.

“We have come to realise that room quality is brought about by a very complex inter-relationship of conditions,” says Somervell, “but when the sun breaks through, it’s an absolute delight.”