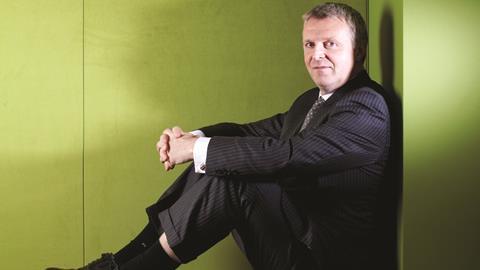 When Lend Lease dropped the Bovis name, it said goodbye to one of UK contracting’s oldest and best-known brands. Building talks to Michael Dyke,
the construction arm’s new boss, about where the division will go next. Portrait David Levene

As Michael Dyke settles down on the sofa in one of Lend Lease’s newly refurbished meeting rooms, it looks more like he is about to kick back, put his feet up and read the paper than do an interview. This is entirely down to the environment, however, and not the man himself. Lend Lease’s new executive director of project management and construction for the EMEA region is as focused as they come. But it’s amazing what a few purple-hued soft furnishings, rugs and scatter cushions can do to mellow the corporate harshness that so often characterises large companies’ office spaces. And with it comes a far friendlier, more relaxed vibe.

Whenever an organisation changes its name or physical branding or ID, it’s a big deal. This is something that is very important to some clients

Anyone who has been following the Lend Lease story over the last 18 months will know all too well that it will take more than an interior design makeover to propel the firm’s remodelled construction business forward. And that’s where Dyke comes in. The new man arrived after months of restructures and redundancy consultations at Lend Lease, and now the former director of UK construction at National Grid is five months in to what is likely to be the toughest job of his career.

Despite the enormity of the task ahead, the 44-year-old appears comfortable with the job in hand, though he concedes that he is working hours he wouldn’t usually approve of: “I am out so much, meeting staff across the UK and having face-to-face meetings with customers that I end up spending a lot of time at my desk working late into the evening,” he says. “I am not proud of it. As a good leader I would like to think I am modelling the type of work ethic I would expect from staff. But like in any new role, the first six months are the busiest and you do find yourself having to work extraordinarily long hours.”

No question, then, over Dyke’s dedication to his new role. But is all the effort paying off?

It would be fair to say that it has been a tumultuous couple of years for Lend Lease. After the division was brought under the control of Australian Dan Labbad, the head of Lend Lease’s European development arm, in 2010, a series of changes were made to the company’s management structure, namely the regional set up which saw a flurry of directors leaving the firm culminating in the departure of Julian Daniel, executive general manager for England and Wales and Chris Houchin, business development director, in July. It was then reported in August that revenue at Lend Lease’s European arm fell by 40% for the year ending June 2011 to £1.49bn. The firm’s European construction division also saw a fall of 40.5% to £1.29bn. And all this against the backdrop of a decision by Lend Lease to drop the Bovis name, a move revealed in Building in January and a process well under way almost a year on.

Now, the question on most people’s lips after last year’s name change is likely to be exactly how Lend Lease looks after a dramatic brand overhaul. Is Dyke in a position, after five months in the job, to answer these questions? It turns out he is, calmly and collectedly to boot.

First, the new structure and a cementing of the firm’s regional focus. Following Dyke’s appointment, Paul Gandy has taken over the role of executive manager for England and Wales and three regional heads will now report into him. Paul Sims takes on the role of London regional head, Russell Stewart will run the northern division of the business and Nick Wylie will oversee the Midlands. Gordon Anderson will remain in his current role as executive general manager in Scotland. All four men have been at the company for over 10 years, 20 in the case of Sims and Wylie and 30 for Anderson. Company stalwarts in key roles is a smart move but Dyke does hint towards a more sector focused future for Lend Lease, looking at waste, education and rail in particular.

Though he is quick to add that he believes it is “crucial to maintain a regional presence.” Before talking sectors more specifically, Dyke tackles the issue of the name change and other decisions made by the company before his arrival.

He is adamant that tough decisions have been made: “Since 2007 the global financial markets have rocked and rolled and that has had a serious impact on the construction sector and before my arrival, some tough, brave decisions were taken,” he says. “Those challenging decisions have now been made
to future proof the company as a whole and now we’re in a stable position that will allow us to grow.”

I could tell my people how the world is going to be. I could announce and decree. Or I could explain my view and why I hold it and persuade people to see why that’s what I think

One of those “challenging decisions” was making a significant proportion of the workforce redundant over a two-year period, putting around 150 staff on notice at one time in the case of the athletes village in December 2010. Back office capabilities have been thinned out, he says, “trying not to adversely impact on frontline capability where we have our best people out on the ground trying to secure future work and delivering existing schemes”. He adds that there are no plans for further job losses.

But he does admit that the company name change could have been communicated better especially to customers, which is another area he will be focusing heavily on: “There has certainly been a lot of transitional change at the firm,” he says. Some clients saw the change as non-complex and consider us the same people on the ground with the same capabilities as before. At the other end of the spectrum, some haven’t seen it like that and it would be fair to say that we could have taken more time to explain the transition and the reasons behind it. There is a lesson there for the future. Whenever an organisation changes its name or physical branding or ID, it’s a big deal. This is something that is very important to some clients.”

He adds that he is 100% behind the rebrand and he is at pains to reassure clients: “My message on this is simple. The name may have changed, but it has changed for the better and we offer better services now and for those customers looking for the traditional construction company they used in the past, it’s business as usual.”

It might be business as usual, but that doesn’t make times any less tough, Lend Lease’s European construction division saw pre-tax construction profits at the UK and European business fall by almost half to £13.7m from £25.4m for the year ending 30 June and revenue fell by a third to £812m.

On how he’ll attempt to turn things around, Dyke says that the future of Lend Lease’s project management and construction division’s workload in EMEA will be to “bid less and win more”. His approach will be to focus his team on going for the right projects - the ones the firm has the right experience in and the ones they are likely to win. “I am always going to be a fan of selecting carefully what we do and play on our existing expertise. We’re not in a place where we’re looking to scattergun the market with lots of new propositions or new customers. It would be incredibly risky for us to start entering brand new markets where we don’t have experience or sector-specific knowledge and to do that would, I think, be somewhat remiss of me. It is inevitable in tough times for customers to be seeking to get the very best price but we don’t want to be associated with a drag race to the bottom.”

Dyke says Lend Lease will always be a “commercial city builder” and adds that three other sectors - heritage and culture, defence and education - will make up the remaining focus areas. What about infrastructure? Clearly a huge growth area and one that most firms are desperately clinging onto as 2012 approaches. Plus, for a man with such a strong infrastructure background, one would expect him to be chasing work in this sector. And he is: “Our primary focus to date has been on our historical core property market, media, defence and social infrastructure, such as schools and hospitals. But economic infrastructure - transport, energy, water, technology - is an area of growth. We will review opportunities as and when they arise and we will target projects where we believe there is scope to bring value to customers, by leveraging core capabilities - project management, construction management, programme management, logistics, risk management and commercial management.

However, he dismisses working in the nuclear sector in the short to medium term. What about the long term? “No, I don’t believe so at this stage.”

Dyke may have his work strategy figured out, but what about his staff and customers? This year was a period of change and 2012 looks set to be even tougher for main contractors. How will he guide them through the next 12-18 months? “I want everyone to feel reassured. I really do believe we are in a position to do well as a business. And now we’re hiring. We are always on the look-out for talent, especially in identifying work opportunities, incubating them through relationships and formal responses to tenders and converting those opportunities into projects.”

He adds that he is not “a PowerPoint presentation person”. Rather he likes to have face-to-face conversations with people, both customers and staff and he is open to opinions and feedback from all sides: “As a leader I want to make it my business to persuade and convince people, rather than force them to do something, by talking to them and listening to what they are saying.

I could tell my people how the world is going to be. I could announce and decree. Alternatively I could explain my view and why I hold it and persuade people to see why that’s what I think.”

But presumably if the convincing part of this strategy doesn’t work, then the only other option is to force people to follow his lead? In a perfect reflection of the tranquil vibe of the new meeting room against the backdrop of a multimillion-pound global business that has to take tough decisions every day, Dyke says: “I will strive to do everything in my power to ensure people walk with me and that I listen to them very carefully. But, and I say this very openly, this is not a democracy.” 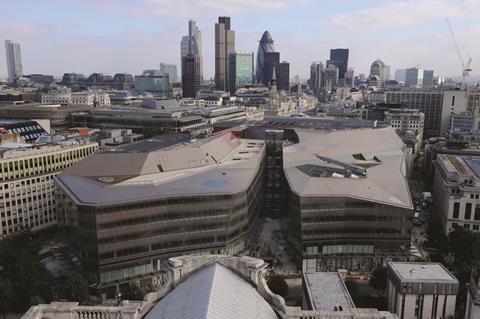