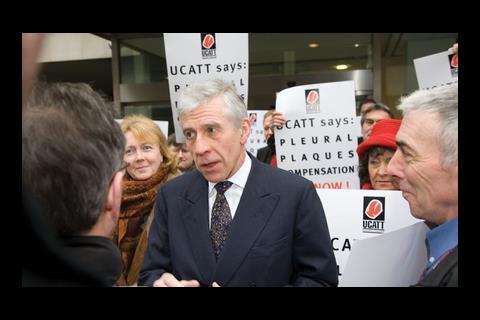 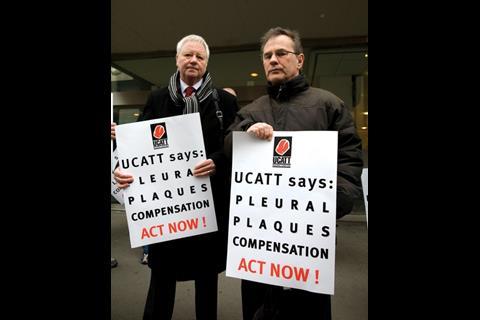 John Scott (left) and Tony O’Brien offer help and support to those suffering from asbestos-related diseases. Both have pleural plaques

How would you feel if you knew you had a one in seven chance of developing terminal lung cancer owing to your work, and the highest court in the land thought you deserved no compensation? Eleanor Goodman spoke to two men who do, and followed their campaign for government action

Two months before the diagnosis, you might notice that your back pains have got worse lately, or that you’re feeling out of sorts, or that your liver has been paining you. Eventually you’ll be fed up enough to go and see a doctor, who will probably arrange for an x-ray. And when the results come back, she will show you an area of shadow on your lung that she doesn’t much like the look of, and she’ll ask about asbestos … then she’ll gently inform you that it could be caused by cancer, but you’ll need to go for a CAT scan to be sure …

The results are back and it’s wonderful news. The shadow was caused by pleural plaques, which you discover are a kind of fibrous area of the lung that is partly calcified. And no, they’re not dangerous; what they are is a sign that you’ve been exposed to a lot of asbestos at some point in your life. Then, after the euphoria has worn off it hits you: you’ve been exposed. What, you wonder, are the chances you’ll develop mesothelioma, the highly aggressive, almost always fatal, lung cancer that is caused by asbestos?

Well, the number of people diagnosed with plaques each year is about 14,000, and the number of new mesothelioma cases is 2,000, so you have something like a one in seven chance. That is a terrible burden to carry, but for the past 20 years there was some small comfort to be had from the government, which operated a compensation scheme. But not any more it doesn’t. In January 2006 the Court of Appeal found that the right should be ended, and in October 2007 the law lords agreed, on the grounds that plaques are symptomless and do not necessarily lead to cancer. Last month, construction union Ucatt launched a campaign to reinstate it.

The campaigners’ sense of injustice has been exacerbated by the Scottish government’s decision to reverse the ruling. Ironically, this comes at a time when asbestos-related disease is rising. The most recent figures from the Health and Safety Executive reveal that 2,037 people died in 2005, compared with 1,531 in 1968. The annual number of mesothelioma deaths in Great Britain is estimated to peak somewhere between current levels and 2,450 deaths in the period 2011 to 2015. The union is also in the middle of its Asbestos Awareness Campaign to alert workers to the danger of the material. It released figures revealing that more people die from asbestosis than are killed on the road; 20 tradesmen are buried every week.

On 20 February, a group of campaigners met justice secretary Jack Straw at the Ministry of Justice to present him with a giant postcard detailing the facts of the situation. While he considers their case, we speak to two of the campaigners who suffer from pleural plaques.

As an apprentice carpenter–joiner, I would cut sheets of asbestos and my face would get covered in white dust. You were told it was okay, but I think there was a conspiracy of silence among the manufacturers. I was diagnosed three years ago.

I’ve known 11 people who’ve died and I’ve got their names listed on my office wall. Every time members come into my office it’s a warning to them to be aware.

I’ve seen a lot of people living with plaques get suicidal. You work all your life, you put money away and you don’t get much out of it because there’s no pension. My brother, an electrician, has also got it. My dad was a carpenter–joiner and my uncles were building workers – all of them died before they were 60. It makes me very angry.

I had the compensation. You get half of it and then if you get mesothelioma you can go for full compensation. I got £3,500. One of the most distressing things is the inhuman approach in court to cross-examining sufferers. It’s just about money.

You need recognition that wrong has been done. I think Jack Straw’s on the fence. But I’m pleased he came out to meet us and I hope that indicates he’s on our side now.

When the doctor says the word “asbestos”, it puts the fear of God into you. I was diagnosed eight or 10 years ago when I was in hospital for something unconnected.

After that you’ve got the negotiations over compensation. That’s frustrating, because you’re sitting with a disease you haven’t had any control over, you’ve been forced into working with a dangerous material and the people who are responsible are trying to use insurance companies to pay you off with just a couple of thousand pounds.

I had £11,000 and that’s a full and final settlement. But even when you get that compensation, it doesn’t put a line under it. People like me were telling those companies that the substance was harmful and we were being told by experts that it was okay. I feel bitter towards the companies I worked for.

I like to think I’ve got a positive outlook, but I’m still affected by it and I know others are affected a damn sight more. Many times in the past 20 years, I’ve picked up the phone and the lad on the other end has been depressed – and that’s an understatement – and he’s told me he’s been diagnosed with an asbestos problem. The first thing we do is get him in touch with solicitors, but I find myself counselling these lads. Some keep coming back and it’s not for advice, more just to talk.

I have two sons in their 30s and I don’t talk about it with them, although my wife knows. You tend to protect your family from it and try not to give it too much thought, because the more I think, the angrier I get.

The problem with pleural plaques is you just feel like the clock’s ticking a bit faster.

What Jack Straw said to campaigners:

“I don’t want to raise people’s expectations; we are looking at this very carefully and that’s a promise. What I can’t promise is what the outcome will be. It is a very complicated and difficult issue. [The decision to end compensation was reached because] one of the Court of Appeal judges found in favour of the applicants, and altogether seven of the most senior judges in the land found the other way. It’s clear to me that the Law Lords took their decisions very reluctantly, but took it on a matter of causation. So we are looking at it very carefully and are going to meet a delegation from Ucatt and members of parliament very shortly. There are loads of possibilities but they are possibilities, not probabilities. As I say, it’s very complicated.”

The pleura is a two-layered membrane that surrounds the lung and lines the inside of the rib cage. When people breathe in asbestos, the fibres can work their way to the pleura and cause scarring. This causes plaque to grow on them and it may show up in x-rays or CAT scans. Between 20-60% of people who have been exposed to asbestos at work will have pleural plaques. The condition is symptomless and does not necessarily cause mesothelioma, but it does increase the chances of developing it. Mesothelioma is almost always terminal, usually within a year of diagnosis.

For more information follow the campaign link at www.ucatt.info