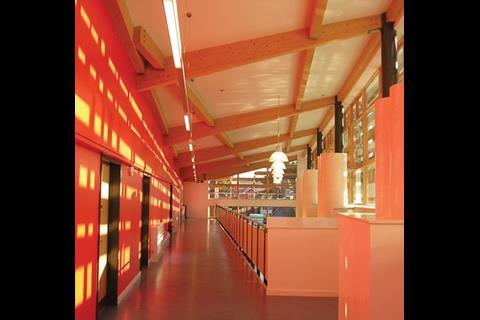 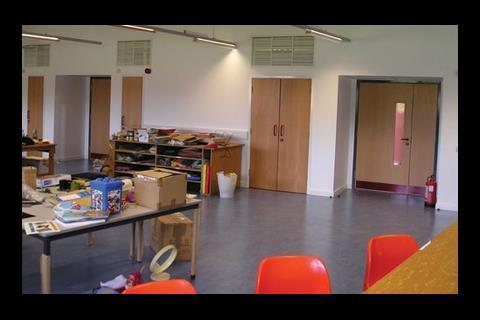 A Cambridge university research team decided traditional natural ventilation strategies were just not up to scratch and came up with a new approach. Stephen Kennett reports

Cambridge university lecturer Shaun Fitzgerald believes designers have got it wrong when it comes to naturally ventilating school classrooms. He reckons that despite the idea that buildings with opening windows use less energy than mechanically ventilated ones, the savings are just not being realised. What’s more, the indoor air quality of classrooms is suffering.

This isn’t just hearsay. Over the past six years, Fitzgerald has been involved in a research programme at the BP Institute in Cambridge to understand the flow of natural ventilation in buildings and work out how this might be used to pioneer new strategies for low energy building design.

The research helped highlight a number of points. “One is that there are massive opportunities to make a difference in the energy consumption of buildings by adopting natural ventilation strategies, which really aren’t being taken up by design teams,” says Fitzgerald. Another is that what’s written in the design guides on natural ventilation – that fresh cool air should be brought in at low level and vented out at high level – doesn’t necessarily work. “It’s utter garbage,” he says. “You should change the strategy depending on the outside air temperatures.”

In a bid to tackle these issues, Fitzgerald and his colleagues have developed E-stack, a ventilation system that has the potential to reduce energy consumption in winter by up to 75% compared with mechanical systems.

So what’s the secret? The main culprit of excessive energy use is cold draughts. Fitzgerald’s reasoning goes like this. To meet the requirements of Building Bulletin 101 – Ventilation Requirements of Classrooms – a daily average ventilation rate of 5 litres per second per person is deemed to be the minimum needed in a classroom during occupied hours. This is to limit the concentration of carbon dioxide, which can affect pupils’ levels of concentration.

During the summer, the strategy of bringing fresh air in on the perimeter through the windows or low-level vents, and then letting it rise up and vent out at high level, works fine. In the winter however, low-level cold draughts become a problem. To get around this, designers pass the air over a radiator or heater battery to warm it to 15-18ºC. This is where the problems begin.

An average classroom of 30 pupils generates a heat load of about 3kW – 65W per child, 800W for the lighting plus IT equipment. If the air passing over the radiators is already elevated to 18ºC and is then subjected to another 3kW of heating it can quickly rise to a very uncomfortable 38ºC.

Fitzgerald says to stop the room overheating, teachers open more windows, increasing the flow rate of air through the classroom. “So now, that radiator isn’t simply heating air at minimum ventilation rates, it’s preheating much more than is necessary. The amount of energy wasted by that radiator just to stop cold draughts is heinous,” he says.

Fitzgerald’s answer is to change the strategy altogether in the winter and rather than preheating the air, instead harness the “furnace” that already exists in the classroom. To do this, and overcome the original problem of how to avoid cold draughts, he’s developed the E-stack ventilation system.

How does it work?

The concept is simple. Openable windows or low level vents are installed on the perimeter as they would be in a conventional set-up and the E-stack – which comprises two ventilation shafts, a mixing chamber and a pair of fans – is installed at high level.

In the normal run of things, fresh air enters on the perimeter, is warmed by the occupants and rises up and out at high level. However, when external temperatures fall to between 5ºC and 18ºC, the strategy changes. At this temperature there is still enough heat in the classroom to maintain a comfortable 21ºC, but the tricky bit is how to bring fresh air in without creating cold draughts.

Rather than using the perimeter windows, the two ventilation shafts in the E-stack unit are used – one to draw in fresh air and the other to vent the warm stale air.

The clever bit is how the incoming air stream is made to mix with the warm room air. Two low-energy fans – drawing no more than 45W each – are mounted to one side at the base of the two E-stack shafts which counter-rotate and induce mixing of the air before it drops into the occupied zone of the classroom. The pressure difference caused by these fans also helps set up the inflow and outflow characteristics of the E-stack. The entire set-up is controlled using temperature and CO2 sensors.

So does this really qualify as natural ventilation? Fitzgerald defends it by saying the design intent is that it is driven by the buoyancy of natural ventilation. “The fans are there to induce more reliable mixing than you would get by doing it naturally,” he says. “That’s what’s been missing in the industry” – and which has been patented. Plus it uses considerably less energy than heating the air with a radiator.

Above 18ºC the mixing fans shut off and it returns to stack ventilation. However, there is another benefit of the E-stack – in the summer months it can be put to use to prevent overheating.

Under BB101 guidelines, the temperature in the classroom mustn’t rise above 28ºC for 120 hours a year. “This raises two questions. If its 29ºC you might be complying with guidelines, but is it pleasant. Second, could you put to use the two fans sitting that are there doing nothing”. The answer is to switch the fans so they work in conjunction, pulling air up through the stack and boosting the ventilation rate.

Night-time ventilation can also be done using the E-stack system. Although opening the windows and using the stack is more efficient, this can be a security risk. Instead the system can be programmed so that between certain dates, say, from 1 May to 30 September, it looks back over the last 24 hours and asks: was the room above 24ºC? If it was, the dampers in the ventilation stack remain open when the classroom is empty until it reaches a target of about 18ºC. However, if this doesn’t happen by 3am – when the night air is at its coolest – the fans again switch direction and this time pull cool air in until the target temperature is met.

So far nine E-stack systems have been installed in the UK. From testing Fitzgerald estimates that the system can deliver energy savings in the region of 70-80kWh/m2/year compared to conventional stack ventilation and a pilot study delivered a 50% reduction in heating energy compared to CIBSE guidance and almost halved CO2 concentrations.

They have also come up with a simple interface to make sure the system is operated as effectively as possible. When it’s warm, a red bulb indicates the windows should be opened, and when it’s cold a blue bulb indicates they should be closed. All of which helps to prove that natural ventilation can be made to work and doesn’t need to be taxing.