The UK region most hard-hit by the economic crash and the most reliant on EU trade, Northern Ireland is preparing for another body blow as Brexit negotiations threaten to put a barrier between it and its neighbour, the Republic of Ireland. Joey Gardiner reports 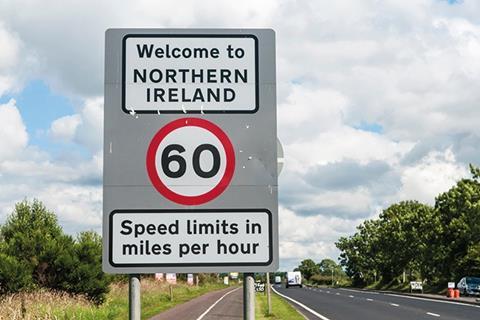 The UK’s decision to leave the EU may be the biggest political issue of the generation, but for Irishman Con O’Sullivan, joint owner of Essex-based electrical contractor Access International Security, it’s also a huge personal issue. Because for the 15 years in which he’s built up his business working for developers and housing associations around London, he has continued living in Ireland, commuting back via Kerry airport at the end of each week to see his home and family. So, whether or not he will continue to be allowed to work in the UK and live in Ireland is a big deal. “We’re waiting with bated breath to find out what it’ll mean for free movement of labour.”

Of course, he’s not the only one worried. As one of four directors of the London Irish Construction Network, O’Sullivan says he has heard similar concerns from members – with some even suggesting they are looking to pull the plug on UK businesses and return home. At the same time UK and Irish firms looking to trade with each other, and major contractors such as Sisk, Murphy and Graham that work on both sides of the Irish sea, are all waiting to find out what the new settlement will be.

But nowhere is this concern felt more strongly than in Northern Ireland, where trade with the Republic across the UK’s only land border with the EU is 10 times as important as it is in the UK as a whole. Amid continuing fears over how the island of Ireland will function after Brexit, the triggering this month of Article 50 could have major economic and cultural implications for the sector. So what might Brexit mean for the relationship between the UK and Irish construction industries, and what is at stake?

In short, a significant amount is at stake – most particularly for Northern Ireland, where a majority of voters backed Remain. The House of Lords’ EU Committee concluded that the impact of Brexit on Ireland as a whole was more profound than for anywhere else in the EU, and that “the nature of Northern Ireland’s economy makes it particularly vulnerable to the potential negative effects of Brexit”. It faces, of course, the same challenges from Brexit as everywhere else in the UK: fears about weaker economic performance, access to skills and delayed capital investment, and uncertainty over the future relationship with overseas trading partners and the regulatory environment at home. But its position heightens these potential problems.

The reason is twofold – firstly, the relative weakness of the Northern Irish economy in general, and, secondly, the interconnectedness of its economy with the Republic. Northern Ireland’s construction economy was hit harder and for longer by the recession after the 2008 financial crisis. Where construction output in the UK is back above pre-crash levels, in Northern Ireland it is still running at 40% below its peak. House prices remain 45% below their pre-recession high, and housebuilding completions in 2015/16 – the last full year for which figures are available – were still a shocking 60% down from before the crunch, with little over 5,000 homes built. Sarah McMonagle, director of external affairs at the Federation of Master Builders (FMB) says: “We’re particularly concerned about Northern Ireland in regards to Brexit because it’s been the weakest of the UK nations since the recession, which makes it more vulnerable to economic shocks.”

Meanwhile the intertwining of Northern Ireland’s economy with Ireland has been growing since the signing of the Good Friday agreement with the Republic, with sectors such as food and agriculture now very heavily integrated. This integration is enabled by a Common Travel Area (CTA) arrangement between the UK and Ireland which allows people and goods to cross the land border without any checks, restrictions or tariffs. The EU’s freedom of movement rules then guarantee the right of citizens to work either side, with an estimated 33,000 people travelling across the border to work. Hence, exports to the Republic make up 6% of the Northern Ireland economy, which may sound small, but is 10 times the level in England.

Overall, Northern Ireland’s trade with EU countries (the vast majority of this being to the Republic) makes up well over half of its total exports, whereas in both England and the UK as a whole, the majority of overseas trade is done with the rest of the world. Any disruption to EU-UK trade is therefore likely to hurt Northern Ireland disproportionately. 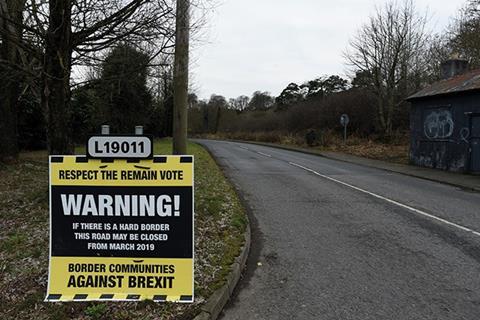 This picture is mirrored in Northern Ireland’s £6bn construction sector, which has exports worth £176m to the Republic and £43m to the rest of the EU. These totals combined make up 94% of all its construction exports. It’s not surprising, therefore that John Armstrong, managing director of the biggest industry representative body in Northern Ireland, the Construction Employers Federation, says that top of his organisation’s list is ensuring Brexit doesn’t mean the imposition of border controls that halt this movement of goods, services and people.

“We’re very concerned about Brexit,” he says. “A good number of our members work both sides of the border. A hard border would be a huge issue for the whole economy and no doubt catastrophic for construction.” The FMB’s McMonagle echoes this, saying: “It’s not just the movement of labour, it’s goods and services – everything making it more difficult to trade. We just don’t know what the outcome is going to be.”

The good news for those with similar concerns is that the UK and Irish government are in broad agreement over some basic principles, such as retaining the CTA. But just because Westminster and Dublin agree doesn’t, in the multilateral world of Brexit negotiations, mean it can happen. Continuing the CTA would require EU approval – as will much else that could otherwise be quickly agreed between the UK and Ireland. This means the outcome will go into the pot with everything else that is to be negotiated as part of the UK’s deal to leave the EU.

Amid this uncertainty, Armstrong’s Construction Employers’ Federation is also, in advance of the negotiation, highlighting the importance to construction of three issues beyond the border itself: maintaining access to necessary skills; the future of EU-funded infrastructure works; and access to the EU single market in order to bring in necessary construction materials. The concerns are echoed by the Northern Ireland Construction Group, a consortium of bodies including the FMB, the Institution of Civil Engineers and the RICS, which says there is “significant risk that the fragile recovery in construction output in Northern Ireland could falter” as a result of the uncertainty. Armstrong says: “Given the uncertainty, you have to ask why clients in Dublin would want to bring in Northern Ireland firms at the moment.”

Willie Moffitt, director at Northern Irish SME contractor Moffitt & Robinson, who has been considering starting to work in the Republic, says the future is now unclear. “If you took on a five-year contract south of the border now, say, the situation is so hugely uncertain, it’d be a major concern. It’s the kind of thing that could make or break the company.”

Meanwhile, the effect of the vote is acting in unpredictable ways, with Moffitt saying the collapse in the value of the pound has seen some Northern Irish builders’ merchants double their turnover as contractors travel up from south of the border to take advantage of comparatively cheap materials.

There is overwhelming pessimism about whether the particular issues faced by Northern Ireland and the Republic will feature high up the list of priorities of those negotiating the Brexit deal, particularly given the current political turmoil in Northern Ireland, following the Northern Ireland Assembly election result earlier this month.

Theresa May’s UK government has set out its intention to leave the single market and potentially also the European customs union, while clamping down on free movement of labour – all of which contradict the priorities laid out by Northern Irish construction businesses. Armstrong described this direction of travel as an additional concern. The FMB’s McMonagle says: “The collapse of power sharing now is incredibly bad timing and it doesn’t help Northern Ireland’s case in getting its voice heard, while the political uncertainty is not good for business investment.”

The EU seems to want to come down hard on the UK, and I don’t think the EU will care if Ireland is a casualty in this

Moffitt & Robinson’s Moffitt says: “I think Northern Ireland will be forgotten in the deal. The EU seems to want to come down hard on the UK, and I don’t think the EU will care if Ireland is a casualty in this.”

Of course, it’s not only Northern Ireland that will feel the pain of Brexit – the UK construction industry’s relationship with Ireland, spanning centuries, is much wider than that occurring on the island of Ireland itself. But while it is easy to name successful UK construction firms led by Irish entrepreneurs, such as Laing O’Rourke, Keltbray, Ardmore and Byrne Group, there are few that have substantial businesses on both sides of the Irish Sea.

Hence O’Sullivan of the London Irish Construction Network says the main concern he has picked up on is from Irish nationals, around their continued right to remain working in the UK and move freely between the two countries. Irish nationals make up between 1-2% of the total UK construction workforce, and anything up to a third of all foreign-born staff.

“The majority of Irish-owned businesses here don’t trade hugely in Ireland, but there is a certain amount of bringing in of staff, particularly since the recession in 2008/9. And a number are getting products manufactured in Ireland, where it can be easier to get lines of credit, then shipped over to sites here. These are all matters of concern now,” O’Sullivan says. “It’s already difficult to fill the trade positions, everyone is struggling to get electricians and bricklayers – how much more difficult is that going to be after Brexit?”

With so much uncertain, it is hard for those businesses potentially affected to do anything other than plough on and hope for a good outcome. Moffitt says: “It’s a bit like if you don’t know anyone that’s drowned it’s hard to be too concerned about drowning – it’s hard to be concerned about something you don’t know anything about and can’t control.”

O’Sullivan, for one, has no doubts what he will do if Brexit means he can no longer commute back and forth between the sceptred and the emerald isle. “I won’t have an option – I’ll have to move here. I’ve no intention of taking retirement,” he says. “I’ll do whatever I need to do but it’ll be a big issue for the family.” Many in similar situations will be hoping it doesn’t come to that.