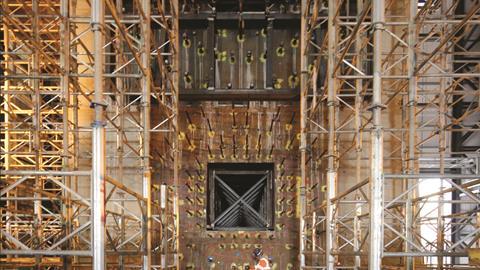 Tidal turbine technology is changing fast and offshore wind turbines are getting bigger, so the government-backed firm Narec is investing £80m into its testing facilities to simulate the harsh conditions at sea. Thomas Lane explains

Putting wind turbines out in the North Sea is a great idea providing nothing goes wrong. Offshore wind is faster and more even than on land, turbines can be bigger and more efficient and there aren’t the planning issues to bog down schemes.

But getting the technology right is a very expensive business because conditions are so hostile and access is difficult. The first generation of offshore wind farms suffered from a multitude of problems including lightning strikes, gearbox and blade failures - even foundations sinking into the sea bed as these were essentially onshore wind turbines parked at sea.

Things have improved but the nascent tidal power industry is going through a potentially more expensive learning curve as tidal turbines sit on the seabed. Steve Abbott, marketing manager for marine renewable test agency National Renewable Energy Centre (Narec), says a company called Atlantis is testing a tidal turbine out at sea and lifting it out of the water for access doesn’t come cheap. 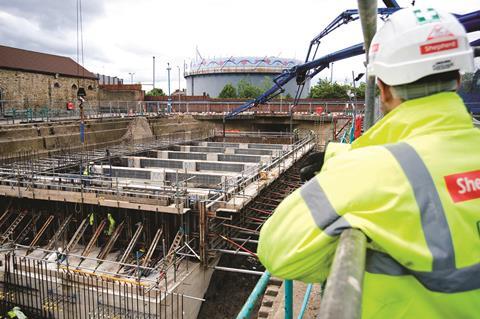 “It costs hundreds of thousands of pounds to get a vessel out there and lift it out of the water,” he explains.

Narec was set up by the government in the hope it would stimulate a home-grown marine renewables industry. Located in a former shipyard in Blyth, Northumberland, it tests the durability of marine renewables components before these are put into action in the water, which is much cheaper than trying to fix problems at sea.

“The whole proposition behind Narec is the manufacturers need to certify their products so the utilities can buy these and get insurance,” explains Abbott.

He says offshore wind turbines are getting much bigger, with blades up to 70m long which need to be proven before being put into service. Narec’s existing facility, which is capable of testing blades up to 50m long, is rapidly going out of date. It also wants to be able to offer test facilities for the new generation of tidal turbine technologies. Narec is investing £80m in three new facilities; the first will test wind turbine blades up to 100m long, the second will test the drivetrains of tidal turbines and the third facility will test the gearboxes and generation components of offshore wind turbines. 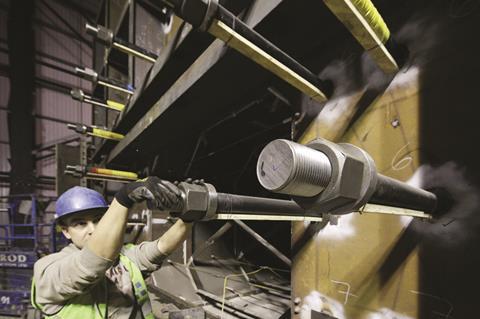 The new facilities are being built by Shepherd Construction and are heavy engineering meets precision tolerances. Enormous forces are applied to the turbine components to simulate conditions out at sea and to enable lifetime testing in a compressed period. The gearbox and generation component test facility can apply forces up to 15mW to turbine elements. “That is equivalent to 15 diesel locomotives trying to rip the components out of the ground,” explains Chris Kilcran, lead planner for Shepherd.

Enormous foundations are needed to secure the test equipment and turbine components, which must be precisely located as out-of-tolerance forces could cause catastrophic failure.
Shepherd was originally going to do just the shell and M&E but sold itself to Narec by offering to do the whole package, including procuring and installing the highly specialised test equipment. Getting the bid right was challenging as there wasn’t a precedent for this type of job apart from a similar facility in the States.

Poor ground conditions and the need for very solid foundations mean the 5700m2 slab is suspended. A staggering 533 piles up to 750mm in diameter support it

“We wanted to get ahead of the game so we went out to Colorado for a three-day visit,” explains Dave Patan, Shepherd’s managing planner. “It was minute compared to this but it helped enormously with the tender.”

In January 2011, work began on the 100m blade test facility, which has been built over an old dock filled in with rubble. “We did 120 trial bores to make sure we could punch the piles through the base of the dock,” explains Patan. “If we hit the dock walls we had to reposition the pile locations as we couldn’t drill through these.”

Patan says asbestos was found in the rubble, which took time to be removed. “It was difficult from the programme point of view as we were trying to pile at the same time,” says Kilcran.
The combination of poor ground conditions and the need for very solid foundations mean the 5700m2 slab is suspended. A staggering 533 piles up to 750mm in diameter support it.

The slab is up 2.5m thick and required 8857m3 of C60 concrete. The business end of the facility is a hub that supports the turbine blades under test. This is fixed to a block of concrete 10m square and 15m high, which can accommodate blades at two different locations. The blades are fixed at the hub end parallel to the floor, while winches and cranes pull on the free end and release this in the same way school children like twanging the ends of ruler on a desk. This generates considerable forces on the hub. “It is really heavily reinforced - there’s hardly any concrete in there,” says Patan.

The blade is bolted to a steel hub adaptor plate that is in turn fixed to the large concrete block. The top plate is used for testing the largest blades and is 250mm thick and 8m in diameter and weighs 91 tonnes. It is clamped against the concrete by 104 pre-stressed threaded steel bars running right through the concrete block and secured by bolts on the other side. Called Freyssinet bars, these are up to 80mm in diameter and will stretch by 40mm once pre-stressed. 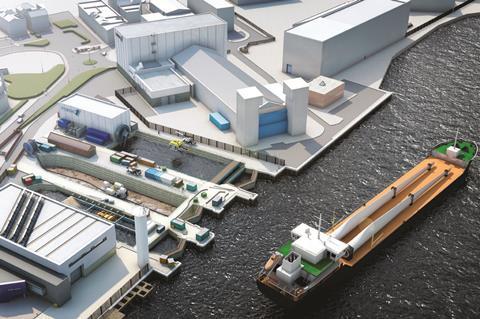 Special winches fixed to circular steel rings set into the floor will be used to bend the turbine blades with a force of up to 600kN. A total of 132 of these rings, referred to by the team as “wagon wheels”, were needed to offer plenty of flexibility for winch location. Shepherd managed to procure the winches from a Sheffield based firm called Davy Markham. Kilcran says they were selected because their winch design was much simpler than the alternatives.

“They kept it simple so they won the contract,” says Kilcran. “This was £500,000 less than the other bidders.” The wagon wheels were cast into the concrete to within a tolerance of +/- 0.25mm. The rest of the building is relatively straightforward and is a large shed to keep the weather out.

The marine test facility called Nautilus is also well advanced and is built in a dry dock with one end filled with water. The 900m2 filled in section houses a 3mW motor connected to a gearbox which is connected to a “force application facility”. This will apply force to the drive trains of tidal turbines to ensure these won’t fail underwater. The tests can be done underwater in the dry dock or the FAS and gearbox can be switched around to the other side of the motor, which is fixed on one position for testing inside the covered area.

The dry dock was filled in and topped with 4,900m2 of concrete to provide a stable, solid base for the tests. The motor, gearbox and FAS sit on 170mm thick metal plates set into the floor. These are held down by 96 80mm diameter Macalloy high tensile bars fixed to the rebar - the steel plate is dropped on top and bolted down. 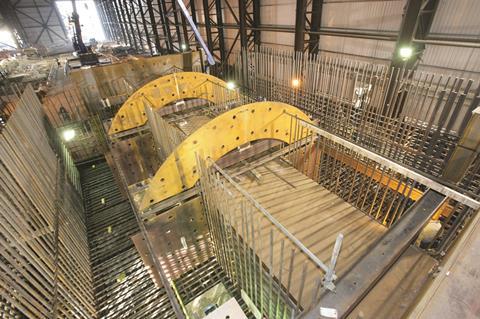 The facility for testing wind turbine blades up to 100m long is well advanced. At its heart is a reinforced concrete block to which the blades are attached

“Everything has to be spot on so you can drop the plates down on top of the bars,” explains Kilcran. “The hole tolerance is 0.1mm and the plate flatness tolerance is 0.15mm.” He adds the distance between the three plates has to be within a tolerance of +/- 0.3mm.

The bar and plate positions were checked using laser tracking both before and after concreting around the bars and installing the plates. “We had to keep the doors shut and the temperature up and constant while we were doing the measurements,” explains Kilcran. The tests are potentially noisy so a sound insulating cladding system has been used for the envelope. 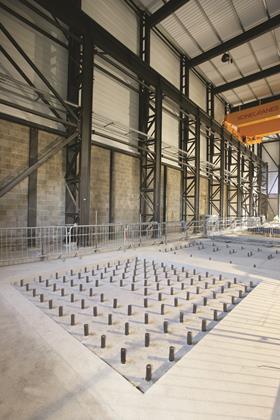 The motor, gearbox and force application facility used for testing underwater wind turbines are fixed to these metal plates embedded in the floor. These required heavy foundations built to precise tolerances

Work is at an early stage on Fujin, the test facility for complete drive train or components of wind turbine generation systems. This is similar to the Nautilus in that a FAS applies force to the wind turbine nacelles and components. The main difference is the FAS motor is rated at 15mW which means big numbers for the building and test equipment - the FAS weighs 450 tonnes alone and is connected to the test piece using the largest articulated coupling in the world.

Once this is finished, Narec will build an offshore test facility 6km off the shore of Blyth to test wind turbines before these are installed in deep water. Hopefully this investment will pay off and make the UK a leading centre for offshore renewable technology.