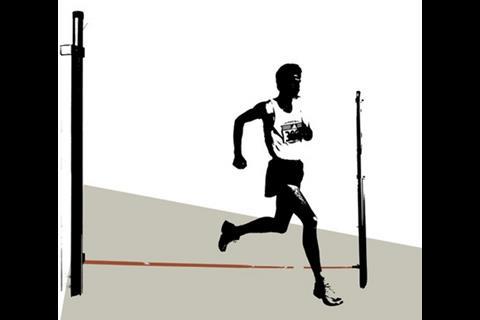 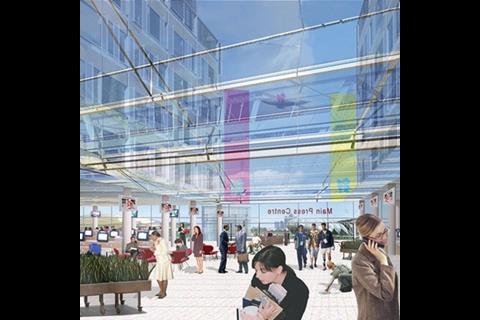 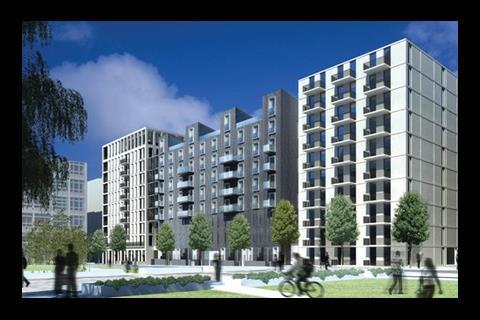 First, the Olympic village was downsized by 1,300 homes. Now, the media centre is likely to be replaced by a ‘mixture of temporary and permanent facilities’. Whatever happened to the 2012 legacy? Joey Gardiner investigates

When Frank Lowy, founder of Australian shopping centre giant Westfield, came to London last week to open his gigantic new mall in White City, it wasn’t the only part of London he had on his mind. Olympic bosses met Lowy, and other members of the Westfield board, to attempt to outline a deal designed to get the Olympic Delivery Authority (ODA) out of one of its many funding holes.

The ODA now wants to move part of the £385m media centre to offices in Westfield’s Stratford City development to avoid having to build its own. Much of the rest of the centre would be built as temporary accommodation. If this deal is signed, it will not only be a nail in the coffin of the scheme that developers Igloo and Carillion signed up to build, but a huge blow to hopes for a major employment legacy beyond 2012 (see box, overleaf).

The debate over the future of the media centre – which is supposed to start on site in March – is the biggest sign yet of a deepening rift over the regeneration legacy of the Games, one that pitches culture department (DCMS) against communities department, the ODA against the LDA (London Development Agency). Senior voices within councils, regeneration agencies and even developers are now saying the ODA and its sponsor department, the DCMS, are all but abandoning the legacy in order to simply have venues ready for the opening ceremony.

Trouble at the village

Fears over the legacy have grown since the collapse of the original plans to finance the Olympic village. The ODA was originally supposed to put about £250m into the village, according to the National Audit Office. Developer Lend Lease was to provide the rest of the estimated £1bn.

However, Lend Lease has been unable to raise funding in the current climate. In order to reduce costs, the number of homes being built has fallen from 4,000 to 2,700, with kitchens being turned into bedrooms to squeeze the athletes in. The ODA says that the pledge to eventually build 9,000 homes in the Olympic park will be unaffected, as many will be built in the years after the Games, but the fact remains that public investment in the Games was supposed to leave a housing legacy, and this has been cut dramatically.

Andrew Boff, a Conservative member of the London assembly, and a long-time critic of the plans for the village, is unequivocal. “There’s no question that the legacy is losing out,” he says. “The very statement that they’re reducing the number of properties and taking out the kitchens indicates they’re refocusing around the needs of athletes.” Last month, Olympics minister Tessa Jowell said she didn’t expect to have the deal with Lend Lease signed until next year, with the ODA paying for construction in the meantime. However, none of the Olympic sources spoken to by Building expect Lend Lease to buy itself back in until much later, if at all, because of the credit crisis.

The ODA is therefore desperate to reduce its outlay, all of which eats into the £2.2bn contingency budget. The soon-to-be-launched Homes and Communities Agency (HCA) is expected to put up to £100m of affordable housing grant into the scheme, but there are also talks over it providing more money as an equity stake. It is understood that other potential funders are also being approached.

Nevertheless, attention from the ODA and public bodies has shifted to the media centre, and its post-Games development, branded “Neon” by the developers. According to a document seen by Building, the 1.3 million ft2 complex, comprising a main press centre (MPC) and international broadcast centre (IBC), was originally to have left an immediate legacy of 742,709ft2 of high-spec offices and studios.

However, in October, the mayor of Hackney, the borough in which the media centre is to be based, went public with his fears that only “a fifth” of the space used during the Games would be left in legacy.

According to several sources, it is actually likely to be even less than that – current plans are to leave a permanent legacy of just 200,000ft2 of office space. These offices cannot be moved as they are to house broadcast staff and must sit alongside the studio space on the original site. Print media facilities will be housed at Stratford City, as long as a deal can be struck with Westfield, and the IBC buildings – TV broadcast suites and studios – will be, for all intents and purposes, temporary. Furthermore, it is understood that the ODA is investigating whether the buildings can be constructed to just a temporary two-year building licence, making them exempt from Part L energy-efficiency regulations. This, despite the ODA’s pledge to build the greenest Games ever.

Building also understands that if the plans go ahead, Igloo and Carillion are likely to be employed only as development managers, rather than as true developers, albeit with an option to buy back into the scheme later. But, unlike with Lend Lease at the village, sources maintain they were prepared to go ahead with the scheme as originally proposed.

The ODA would neither confirm nor deny the above plans, saying in a statement that it was reviewing the media centre project with a “focus on developing a mixture of temporary and permanent facilities for Games time and legacy … We will continue to explore all options”. It added that no final decisions had yet been taken.

This is all despite the fact that Peter Welton, director of the East London Business Alliance, says he has 40 companies interested in taking space in the broadcast suites after the Games. He says: “If the ODA is building it the way it’s suggesting, then there’ll be no legacy function. There’s a very, very short period of time in which to turn this around.”

The ODA says the reason for its review is that the developers can’t raise the funding. However, the situation is far less clear cut than that. Three separate sources say the required private funding – about £165m from Barclays and the European Investment Bank – has not been withdrawn. They also say that shortly after the deal with Igloo and Carillion was signed, David Higgins, the ODA chief executive, met the banks, which confirmed the situation.

The sources say the banks are able to raise the funding but are unwilling to release it unless a number of problems with the site are addressed, all of which require significant extra investment from the ODA. First, the developers are concerned that the heating services, provided from the Olympic park’s combined heat, cooling and power plant, do not have the capacity for a serious legacy use.

In addition, the ODA’s plan to relocate a water main that cuts across the site would reduce the developable area, making the previously agreed scheme unviable. The ODA flatly denies that these are problems, but refuses to discuss the funding of the media centre, citing “commercial sensitivity”.

However, sources suggest the overriding reason for the ODA’s review and interest in using temporary facilities is a fear that the scheme would go over budget. The problem with this approach is that the consequent fall in value of the end product limits the amount of capital that can be raised from developers. This makes any savings on the £220m public budget hard to achieve.

One source says: “The only logic I can see in the ODA’s position is that if it can get a scheme within £220m, albeit with no private funding, that looks better to its budget.”

Welton replies: “Every single pound you spend on buildings you have to rip down is a pound of public money wasted.”

The LDA, charged with delivering the regeneration legacy of the Games, still holds a trump card. It is the freeholder of the Olympic site, on which the ODA has a temporary lease. Sources suggest an all-out battle is brewing over a request, made by the ODA in recent days, for a 999-year lease – effectively ownership of the site – which could ease the ODA’s budget worries. The LDA is unlikely to allow this to happen, without concrete guarantees over the legacy.

Others, too, think the tide is turning on legacy, particularly since the government declared its Keynesian approach to public investment. Sources say that both Jowell and communities secretary Hazel Blears are taking a personal interest in the issue. Welton says: “People who were leaning back and letting this happen a few weeks ago are now sitting forward. They’re asking: “What’s the return on this investment?”

The next few weeks will be crucial. As the credit crunch deepens, and the 2012 deadline looms, the ODA is getting increasingly concerned over simply getting the Games built on time. But, as Jenny Jones, a Green member of the London Assembly, says: “The whole point of hosting the 2012 Olympics was to leave a sustainable legacy for east London. Widespread use of temporary buildings would be incredibly wasteful and bring no lasting benefits to the community.”

It is understood that Westfield’s Frank Lowy left London last week without agreeing to provide a media centre. But it is most likely a temporary delay – without quick ministerial intervention the legacy will definitely start shrinking.

The ODA, delivery partner CLM, and parts of the Government Olympic Executive – the civil service team within the Department for Culture, Media and Sport in charge of the Games

These organisations are accused by some of ignoring legacy at the expense of getting the Games built to budget. But it isn’t hard to see why they are doing everything to rein in costs.

Unable to rely on developer Lend Lease to provide funding for the £1bn Olympic village, the ODA has to assume the public sector will have to foot the bill. Without drastic measures, this means a large chunk of the £2.2bn contingency budget will be used up in one fell swoop, four years before the start of the Games. Ministers have made it clear that exceeding the contingency is simply not an option, so every avenue for reducing spending is being explored – meaning those projects, like the media centre, that are least advanced, are most likely to suffer.

The LDA owns the freehold for the Olympic site, and as the chief public regeneration body in the capital, has the remit to look after the regeneration legacy. It wants to hold the ODA to its promise that the media centre will provide a permanent legacy of 8,000 jobs in east London.

The councils, particularly Hackney, in which the media centre is supposed to be, are even more keen that the legacy vision is realised, and are worried the ODA will attempt to sell off land after the Games to pay back the raids on national lottery funding.

ELBA maintains there are dozens of “household name” media companies which are interested in signing up for space in the broadcasting centre. Critics say none of these are likely to actually sign a deal.

Now? Only 200,000ft2 is likely to be permanent, with accommodation provided in Westfield’s Stratford city development.

Nine-thousand homes across the Olympic park in legacy, of which the village was to provide 4,000. The ODA said last year: “After the Games the plans propose around 4,000 new homes, many of which will be affordable, as well as new schools, hospitals, open spaces, transport links and community facilities.”

Now? Only 2,700 homes will be built before 2012, with the rest of the land sold on for development afterwards.