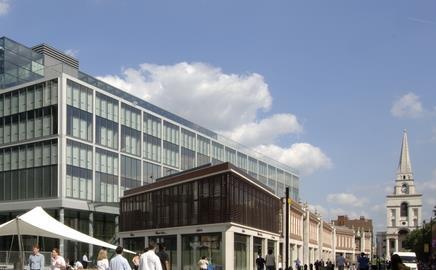 As buildings become greener, the energy needed to make them becomes more and more important. Pretty soon it could add up to 40% of the total lifetime carbon footprint. And as one-tenth of that figure is used by the site office, you can bet that yet more regulations are on the way …

How much should we worry about the energy needed to make materials? And how about the energy needed to organise those materials into a building? The temptation is to ignore these questions. Haven’t we got enough to worry about with Part L, energy labelling, the Code for Sustainable Homes, the upcoming code for everything else, and all the other regulations dreamed and undreamed?

But the thing is, the more successful these regulations are at cutting the energy needed to run buildings, the more important the embodied energy question becomes (see graph, page 46). Embodied energy makes up a much greater percentage of a low-energy building’s total lifetime carbon footprint than one that uses lots of energy. Guy Battle, founder of carbon reduction consultant Dcarbon8, says: “As there has been downward pressure on operational energy use, what used to be an 80:20 ratio of operational to embodied energy is now more like a 40:60. It’s become much, much more important.” All of which raises the spectre of a whole new set of regulations aimed at the manufacture, transportation and installation of building materials …

The figures for embodied energy as a percentage of total lifetime carbon emissions certainly look startling. Design and construction firm Simons Group has worked out that the embodied energy in a distribution centre is much greater than the energy it will use over its 25-year life. Indeed, the operational figure is just 35% of its total carbon footprint. It also studied the embodied energy content of a watersports centre in Dover. It found that the embodied energy content of that building was 23% over its 60-year design life. That might not sound much, but Simons has factored in the carbon produced by designing and constructing the building. The design element is less than 1%, but a whopping 7.5% of the building’s lifetime carbon footprint is estimated to come from site operations. This takes its embodied energy to nearly a third of the total.

At the other end of the scale, Dcarbon8 worked out that the embodied carbon of a supermarket is 10% of its total carbon footprint, compared with 90% operational energy. This is because the typical supermarket uses a great deal of energy.

These figures have prompted calls for legislation to tackle the issue, as embodied carbon is going to become ever more significant. The UK Green Building Council (UKGBC) is working with the communities department on a code for sustainable non-dwellings. “We have agreed we should stick as closely as possible to the parameters used for housing,” says Paul King, UKGBC director, “but this does raise the point that we should be looking at this issue more.” King adds that the UKGBC is thinking about setting up a task force to look into embodied energy.

King will need a taskforce at his disposal because legislating for embodied energy is fraught with problems. First, legislation cannot be introduced until there is a consistent way of working out the embodied energy content of products. Both Simons Design and Dcarbon8 have used generic figures from Bath university for the carbon emissions of a range of different materials. These take no account of the efficiency of the manufacturing processes or where materials are sourced. There are a variety of tools available for calculating the embodied energy of materials but very few manufacturers use them, and unless everyone uses the same tool, products cannot be compared.

One answer could be a British Standard that has the backing of the Carbon Trust. This shows the embodied energy content of a range of consumer items, and trials have just started with landscaping products from Marshalls and Aggregate Industries. This measures how much carbon is emitted to extract, assemble and manufacture all the bits that go into a paving stone, then transport it to the builder’s merchant. Simon Design’s Rosi Fieldson, an architect who has compiled the figures for the warehouse and sea sports centre, sees this as a positive step. “We would like all the manufacturers to jump onto this bandwagon as carbon emissions would be calculated with the necessary rigour,” she says.

It would make sense to combine embodied and operational carbon. You could choose a lifespan and work towards a total carbon target

But once consistent data is available, does this mean it will be easy to regulate embodied energy? One answer could be to have maximum carbon footprints for a range of building types. Some energy-efficient buildings are complex, which means they have a high embodied carbon footprint. With life-cycle carbon footprinting, designers could choose where to spend their carbon. Battle is a fan of this idea. “It would make a lot more sense to combine embodied and operational carbon. You could choose a lifespan and work towards a total carbon target,” he says. He adds that the process could be kickstarted by using bands rather than specific targets to give people time to get used to the idea. These could be tightened up, and in five to 10 years would turn into specific embodied energy targets.

But this idea is not universally popular. Michael Ankers, chief executive of the Construction Products Association, is concerned that other important issues might end up being compromised if there was just a focus on embodied energy. “To regulate entirely on embodied energy could lead to unintended consequences,” he says. “You need to look at the product in the round, which includes issues such as waste and recycled content. With this, you could end up with enormously wasteful products.”

Ankers thinks building regulations will go down the embodied energy content route “in due course”, but he thinks the industry has enough on its plate at the moment. “It would be too much on top of what is already a challenging agenda.”

The UKGBC’s King also recognises that there are problems with legislating for embodied energy. “A lot of people agree with life-cycle analyses, but it does raise some tricky issues,” he says. These include the difficulties of comparing the merits of steel and concrete, a debate that has been going on for years. The other issue is how you factor in how easy it is to either reuse or recycle materials, as this may reduce their life-cycle energy content.

Alan Shingler, Sheppard Robson’s director of sustainability, warns that there are other forces at work. “Legislating for embodied energy content is far more difficult than operational energy. You can’t impose certain types of material onto people as it comes down to speed of construction, cost and all sorts of things from the client’s perspective.” He adds that Sheppard Robson looks at a whole range of environmentally important considerations when selecting materials, as well as embodied energy. There is only one certainty surrounding this complex issue. This debate is going to run and run.

This 10 storey, 23,000m2 office building was designed by Sheppard Robson and built by Skanska for client Development Securities. Sustainability consultant Dcarbon8 monitored all the materials used to construct the building. Embodied energy was calculated using generic benchmarking data from Bath university. The amount of fuel and electricity used by the contractor was also factored in, as were waste levels and the estimated amount of energy that would be needed to demolish the building at the end of its life. The results are shown in this diagram.

How easy is it to cut embodied energy?

Some designers are already attempting to reduce buildings’ embodied energy because they see it as important. Some clients such as Development Securities and ProLogis are also beginning to insist on carbon footprint data for their projects. How do designers rise to this challenge?

According to Guy Battle, who does carbon footprinting for ProLogis, there are some fundamental changes that designers could tap into when it comes to distribution centres. These single-storey buildings do not need substantial structural frames. “Steel is the kneejerk reaction, but now steel prices are going up and carbon is becoming an issue, people are looking at other materials,” says Battle. “If you move from steel to concrete there is a slight reduction, but if you go for wood it is significantly better. Steel was fighting off concrete, but now they are both fighting off wood.” There is a precedent for this: Adnams used glulam beams for its distribution centre in Suffolk.

He says designers have little choice when it comes to structural solutions. “You end up with steel or concrete frames because of issues with spans, progressive collapse and fire resistance.” Energy-intensive aluminium and glass cladding is also popular because it comes with long-term guarantees.

With offices and shops, Shingler says energy savings can be made by specifying “environmentally responsible” materials for thefit-out. This is because the carbon footprint of the shell and core is relatively insignificant when the frequency of fit-out cycles is taken into account.

Furthermore, there are no benchmarking tools such as BREEAM when it comes to measuring the carbon footprint of fit-out works. Shingler says specifiers should look at natural materials such as linoleum and natural rubber rather than vinyl for floors, and use softwood skirting boards rather than MDF.

How can the impact of site operations be reduced? Battle reckons this is one area where carbon emissions could easily be cut. Dcarbon8, his carbon reduction consultancy, calculated that emissions from the electricity used for site accommodation makes up more than 4% of energy needed to build the Development Securities’ office building on our opening spread. “Nobody worries about the site huts, people leave the lights on, the electric heating running and the windows open,” he says. The answer is better insulated huts that make the most of natural light.

More efficient biodiesel plant could be used, and consolidation centres could reduce the amount of deliveries needed. Nearly 2% of the embodied energy at One Kingdom Street came from wasted materials. More efficient use of materials and recycling offcuts would reduce this.