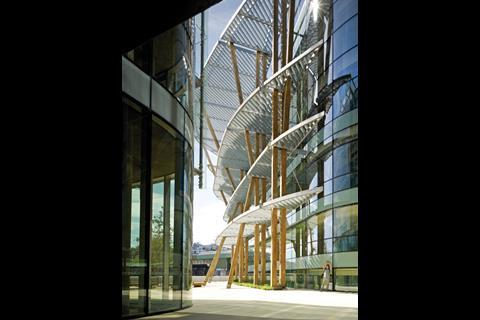 Reducing solar gain became more critical with the introduction of the 2006 version of Part L. This is Watermark Place next to the River Thames, which features three different approaches to reducing solar gain including these distinctive brise soleils made from huge sections of oak 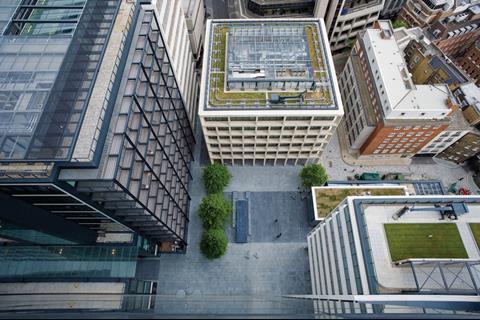 New Street Square was developer Land Securities’ exemplar for sustainability when designed in 2002. It can be easily upgraded to meet future revisions of Part L, to keep it attractive to tenants who increasingly want to occupy green buildings 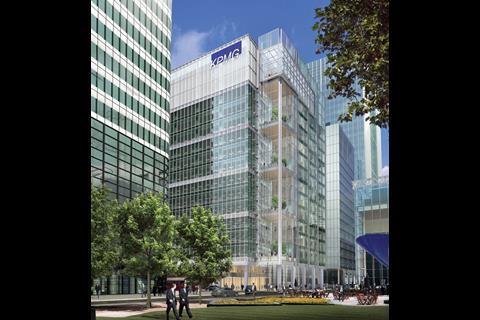 KPMG’s new building at Canary Wharf is just coming up to completion, yet it was designed to comply with the 2010 version of Part L which doesn’t take effect until October. It features tri-generation for power, heating and cooling which helps it achieve particularly good energy performance

As the industry waits for the full details of the implementation of Part L 2010, Simon Rawlinson of Davis Langdon reflects on lessons learned from the 2006 revision and what it could mean for the upcoming changes

The release of Part L 2010 is following a familiar pattern: extended consultation and hurried implementation. At the time of writing, the technical details of how the new standard is to be applied are yet to be announced - limiting the industry’s ability to assess the full impact changes will have before the launch in October.

This is not an unprecedented situation. In 2005, delays to Part L 2006 led to confusion and concern. Rumours sounded the death knell for fully glazed buildings, and the end of fan coils. Fortunately, neither of these scenarios came to pass.

In the end, clients found Part L easier than expected and on many buildings, it was possible to exceed the 25% reduction demanded by 10 or 15%, without much extra cost.

This article looks at how the construction supply chain responded to the Part L challenge in 2006, and why the impact of the changes was less than expected. We use these insights to anticipate how designers and clients will respond in meeting Part L 2010.

Implementation of the 2006 Regulations

Previously, the 2002 Regulations demanded significant improvements in the performance of building elements, such as increased U-values. However, although the 2002 revision introduced a confusing range of assessment methods, the elemental approach was retained, enabling designers to demonstrate compliance by meeting performance targets for component parts of the building rather than undertaking a holistic, building-wide assessment.

As the new regulations were implemented, it became clear that many buildings designed under the 2002 Regulations emitted less carbon than expected. Designers using the elemental method had, it seemed, probably designed in a higher level of carbon reduction than the standard set in the whole building method, and emissions for some 2002-compliant buildings did not need to be reduced by the full 23 or 28% to meet the improved standard.

Fortunately, many clients, including developers such as British Land, Stanhope and Land Securities, took the opportunity after 2006 to deliver high-performance buildings which exceeded the Part L emissions reduction targets. Recent British Land office developments designed to meet the BREEAM “excellent” standard have, for example, exceeded targets by 25 to 30%.

So how great is the challenge this time round? The 2010 Regulations require absolute reductions in carbon emissions ranging from 16% to 40% depending on the building type. The range acknowledges that for some buildings such as hotels and retail, delivering further emissions cuts will be increasingly difficult. By contrast, warehouses and shallow-plan offices are expected to provide greater opportunities for cost-effective carbon reduction and have been set higher targets in excess of 30%.

Inevitably, given the scale of reduction required on some buildings, there is some concern about implementation, particularly for clients that continue to commit themselves to a high BREEAM target, or other emissions-reducing commitments.

Accuracy of assessments of carbon and the costs of compliance

Early cost assessments of the design changes required to meet the Part L 2006 were made in specialist building analysis software such as IES rather the standard Simplified Building Energy Model (iSBEM) software. The introduction of the National Calculation Method in compliance with the Energy Performance of Buildings Directive was one of the most significant changes introduced in 2006, the wider impact of which was probably under-appreciated at the time. Early assessments modelled the changes necessary to deliver an absolute reduction of carbon emissions of 28% for an air-conditioned building, assuming the “notional building” only met the 2002 standards.

For example, when preparing our 2005 cost assessment, Davis Langdon and Arup modelled the 28% carbon reduction and concluded, for example, that in a typical office building with a fully-glazed facade, design solutions such as water-cooled chillers, heat recovery, motorised shading or an externally ventilated double wall would be needed to meet the revised regulations, resulting in increased costs of 3 to 5%.

However, many aspects of enhanced building performance such as the air-tightness of the facade and boiler efficiency were already met through existing specifications, so additional cost was only incurred when extra features or enhanced performance was required.

While our model delivered a 23 or 28% reduction compared to the “notional building”, the actual cut needed was not so great compared to the performance of a typical building delivered under the 2002 Regulations. Reasons for this unexpected outcome included:

iSBEM was created as a simplified assessment system, so more efficient solutions could be identified using more sophisticated analysis.

Because many 2002 buildings were more efficient than expected, the 2006 revision may not have delivered a full reduction in carbon emissions of 25%. However, it succeeded
in consolidating the extra gains that had been made under Part L 2002 and established a common baseline against which future carbon reduction can be measured. It also motivated substantial performance improvements in many aspects of building design and specification.

Possible design solutions under the 2010 Regulations

It is important to recognise that in advance of the full detail of the 2010 assessment method, it is difficult to predict how designers will choose to meet the new standard. In particular, the implications of “backstop” values for envelope performance and some aspects of services design will limit designer flexibility, as will the increased importance of effective controls in the carbon reduction hierarchy. The closure of loopholes around low-carbon technologies which did not encourage actual reduction of energy use, such as biomass, will also remove some of the “easy wins” which clients relied on to meet Part L and Merton Rule-inspired on-site renewables targets.

Based on the fact that most readily available low-carbon solutions have already been used to deliver previous iterations of Part L, we anticipate that the following areas of building design and performance will provide the main means of compliance:

For buildings where carbon emissions are mostly related to heating, continuing to cut down on heat transmittance and improving the air-tightness of walls and windows will be the main way to reduce heating energy and emissions. Warm-edge sealed double glazing, argon gas-filled cavities and triple glazing will help improve glazing performance, but most
of the work will be done in the solid facade. Facade options available for designers of heated buildings such as residential will be more limited, with much less glass possible than before

Backstop values to avoid overheating at the perimeter will increase the attention given to G-values in facade design. The G-value defines the amount of solar heat gain through windows, but also determines the amount of interior natural light available. Designers will incorporate more solid into an external wall design - as part of a curtain wall, rain screen or conventional masonry wall - or if a 100% glazed solution is still desirable, specify moving blinds or an externally ventilated curtain wall with integral blinds

Designers will need to use all means available to reduce energy use by fans and pumps, although most of these options - typically variable speed DC pumps and fans - will already have been adopted. It will probably also be necessary to increase the surface area of ducts to reduce loads on fans. Duct sizes increased by about 40% to reduce loads in connection with Part L 2006, so there is only limited scope for increasing duct size without loss of floor area around risers and increased congestion in ceiling voids. High-efficiency variable speed fan coil units are an important development as chilled beams may not provide the flexibility to accommodate large cooling loads

Close control of lighting energy based on 100% dimmable luminaires is necessary to reduce a major source of cooling load in offices and schools. Reducing lighting loads will be much more challenging in retail environments, where 80% of energy consumption is related to lighting, and where there is much less central control over usage. Reducing emissions from lighting will be aided by innovation in luminaire design such as LEDs, but lighting levels are also likely to be reduced.

Greater consideration of communal heat sources and district heating networks will be necessary if the full benefit of combined heat and power is to be secured. Research by
Davis Langdon and Element Energy (published in the Regs Files, 22 May 2009) demonstrated that community heating was a far more cost-effective means of reducing carbon emissions than on-site renewables such as photovoltaics. Combined heat and power should receive further support from the Renewable Heat Incentive, assuming the initiative has continuing support from the new government

Enhanced controls - including more extensive zoning and facilities such as peak-lopping - will directly contribute to reducing the calculated carbon emissions. Investment in effective controls can make a greater contribution pound for pound than investment in on-site renewables. Furthermore, targeted investment in metering and simple-to-use monitoring and reporting modules will enable actual consumption to be controlled, and unusual patterns of energy use to be identified far more effectively than in most standard systems

Renewables are likely to play a greater role than they have so far in enabling designers and owners to meet the regulations, supported by feed-in tariffs, the Renewable Heat Incentive and technical advances in the main technologies such as photovoltaics. However, renewables may not provide some of the “quick wins” available under the 2006 Regulations. Biomass, for example, cannot be used to deliver lower carbon emissions under the new regulations, although it will remain an important element of the energy mix.
In conclusion, no additional measures have been made available to designers to reduce carbon emissions in buildings, so in order to meet the 2010 Regulations, existing measures will have to be applied with greater rigour.

With many buildings already designed to exceed the Part L 2006 standard by a significant margin, designers will be confident that the latest standards can be met. However, with budgets constrained by the recession, a diminishing rate of return on investment in low-carbon technologies and a scheme which requires disproportionate carbon reductions for buildings such as shallow-plan offices, undoubtedly the challenges of delivery of Part L 2010 will be found in the detail rather than in the big picture. Implementation in 2010 is unlikely to be as straightforward or as cost neutral as it eventually turned out to be in 2006.

In practice, designers and clients found that they were able to meet the updated regulations without significant redesign of their buildings. Manufacturers played their part by enhancing the performance of well-established technologies, and on-site renewables required as part of planning consent also made a contribution.
On a typical commercial building, the following aspects of design and component performance became the main means of meeting the standard:

Acknowledgments
We would like to thank Bulen Hourshid and Steve Mudie of Davis Langdon, Terry Dix and Peter Williams of Arup, Sarah Cary of British Land and Sarah Graham of Integrated Environmental Solutions for their support in preparing this article.