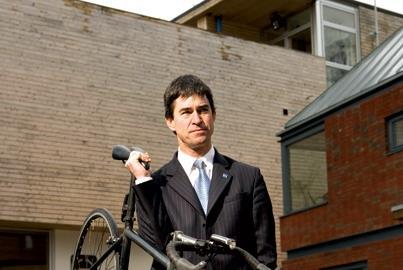 Peter Bonfield is a man in a hurry, whether he’s pedalling furiously on his 36-mile round trip to work or plotting grandiose five-year plans. The question is, can BRE keep up with its energetic leader? Thomas Lane went to find out

Peter Bonfield is one of those people who irritatingly bounce around with seemingly unlimited energy. He cycles 18 miles to work every day and then cycles to all his meetings (including this one – he’s even carried his bike up to the ninth-floor office that we meet in), before cycling home again. He speaks with great energy too, quickly, rattling off so many questions that you have to remind him he is the one being interviewed rather than the other way round.

It’s a year since Bonfield, 44, took the helm at construction research body BRE. On his arrival he announced a grandiose plan to double its size within five years. Given that it is already pretty colossal – last year it turned over £28m – and as money for construction research is thin on the ground, this sounded ambitious. But he is very pleased with the way things are going. “We have exceeded my expectations over the past year and have grown organically by about 25% by turnover,” he says. He adds that staff numbers are also up, by 90, and that the body’s profit will have grown significantly this year, although he won’t reveal by how much (historically it has been 6% of turnover).

At the heart of these growth plans is the sustainability agenda. “Our first priority is to be the world’s leading authority on sustainability in construction,” he explains. Advising large corporations on boosting their sustainability credentials is what gets Bonfield going. He was delighted, for example, to advise Marks & Spencer on its property portfolio – BRE has come up with a 100-point plan on how to build, refurbish and operate M&S stores with minimal environmental impact. “They spent between £1bn and £1.6bn on their property portfolio last year, which is massive,” he enthuses.

These large corporations are clearly where the money is, and Bonfield says he is expecting to double the contribution of high-level consultancy to turnover next year. He also likes the fact that these companies operate outside the construction arena. “If there is a downturn in the construction sector our business is somewhat future-proofed as we have a customer base now that isn’t just construction companies,” he says.

If there is a downturn in the construction sector our business is somewhat future-proofed.

Bonfield also wants to increase turnover from the more traditional “hard-nosed technical areas” of BRE’s work, including research into structures, fire, materials, lighting and product performance. And, not content to stop there, he talks too about opening offices in London and expanding to Abu Dhabi or Dubai and China. “We are opening an office in Beijing at the end of this month as the Chinese government wants us to help with their environmental standards.”

The plan is to redevelop BRE’s 80-acre site north of Watford to help pay for these ambitions. This strategy is at an early stage but could include putting BRE into higher density buildings, creating a technology park and selling off some of the site for housing.

Impressive as this all sounds, some in the industry are concerned that, in the rush to expand, Bonfield is spreading BRE too thinly. As one senior industry source says: “The single biggest criticism is that there is a lack of focus. The BRE brand is so strong there is no shortage of business opportunities – the question is which one they should focus on.”

Bonfield argues that he has brought a very sharp focus to an organisation that has gone through many changes over the last few years since it changed from a publicly owned organisation to a private one.

One thing he definitely has focused on, to industry approval, is practical research aimed at finding solutions to government policy. The best example of this is the BRE innovation park, which gives the industry the opportunity to build real homes to the higher levels of the Code for Sustainable Homes.

Bonfield admits that getting the homes on the innovation park to meet higher levels has been extremely challenging. “All the houses were very difficult to design, especially when you go up to code level six [zero-carbon homes]. We then had to build the houses against the designs, which was even more difficult. Getting some of the buildings to work post-completion was even harder.”

The fact that BRE developed and owns the rights to the code and is now muscling in on technical solutions to meeting it has drawn criticism from some quarters. David Birkbeck, the director of design lobby group Design for Homes, is concerned that BRE is exploiting its position. “At a time when sustainability is dominating the agenda, is it healthy to have the same company that shapes regulation advising on how to meet it? It is very hard to meet the code without their advice and they are charging the sort of fees associated with lawyers.”

Bonfield denies this, saying that BRE doesn’t set the regulations, but is merely contracted by the government to advise it. As for the cost issue, he even suggests that BRE “should think about whether we should charge more,” he says. “Our profits are quite low and are all given to a charitable trust.”

Yet grumbles about conflicts of interest persist, not least over energy performance certification (EPCs). BRE has been appointed by the government to accredit companies that offer EPCs, which are steadily becoming compulsory for all buildings when sold or rented, but it is also a competitor in the market itself. Bonfield may be on track to achieve his ambitious growth targets, but it begs the question – will he lose the industry along the way?

A bike for all seasons

If Peter Bonfield is enthusiastic about BRE, he is positively passionate about cycling. Years before he helped develop the sustainability policy for the 2012 Olympics, he was in the Olympic squad. He has also ridden in world championships and coached the ladies triathlon team for the 2004 Olympics in Athens.

“I just love riding my bike, whether it’s mountain biking, on the road, on my foldie, or on anything. I have six bikes including a folding bike, a beautiful carbon fibre road bike, a nice track bike, a good mountain bike, a fixed-wheel commuter bike and a cafe cruiser. My favourite is the fixed-wheel bike. It’s called a Specialized Langster and I like it because it isn’t flash, it’s matt black and very simple with an aluminium frame. When you pedal it, you feel every ounce of power is going to the rear wheel. You feel part of the bike when you get on it. I love it.”

Peter Bonfield will be speaking at the Think conference, which takes place on 7 and May May. For more information on the event go to the Think website