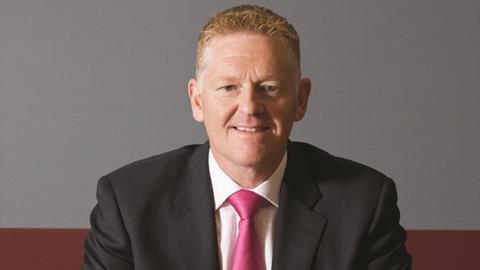 Rydon boss Bob Bond finds being at the helm of a medium-sized company gives him the agility needed to steer a steady course through choppy waters. Even introducing an innovative investment model shouldn’t rock the boat

It is a truth, almost universally acknowledged, that operating as a medium-sized company with a major focus on public sector work is really not the place to be at the moment. Especially one specialising in health and education. But Bob Bond, chief executive of South-west-based contractor Rydon, which falls into every one of these categories, insists life in the middle doesn’t have to equate to a death wish: “It’s not a bad place to be if you have a good business model.” He does concede, though, that there is a serious flipside to being a faster-moving, more “agile” smaller firm: “You can react more quickly if you are a speedboat but if you hit a rock, you know you’ve hit it,” he smiles.

Rocks there are aplenty: cuts in public sector work, a flailing education sector and the uncertainties of health reforms. But Bond has a strategy in place that charts a safer course: he is steering the £127m-turnover company away from being a straightforward contractor. Instead he has other specialisms including regeneration and urban renewal, housing and education and he has been pushing ahead with implementing a health investment model. The firm also has a fast-growing maintenance division with an order book worth £500m.

Bond says that, like so many companies today, Rydon is seeking safety through diversity. “We work across a wide range [of sectors], and that means that if there is any kind of blip we can compensate because we’re not exposed to one particular work stream.”

At the same time, the firm is being forced to innovate like mad. The prime example of this is how Bond has been using Ryhurst, the health division of the business, to move away from traditional PFI. “PFI fell out of favour quite a few years ago but it was obvious to us a long time before that,” he says. “So in 2008 we started to search for a new way of working with our health partners to see if we could come up with a better model.”

The result has been a system called Service Targeted Estate Partnership (STEP) which is similar to PFI but doesn’t tie partners into a PFI arrangement: “We bring our expertise in to manage estates for clients and to rationalise their estates without fixed supply chains,” explains Bond. “It also reduces costs and is more flexible than traditional PFI.”

You can react more quickly if you are a speedboat but if you hit a rock, you know you’ve hit it

Bond insists that, even with health reforms up in the air for the foreseeable future and a consequent lack of clarity surrounding healthcare facilities delivery, STEP is being used as a successful model - one that has caught the attention of minister for the cabinet office, Francis Maude. “We are getting chased by health authorities after delivering the first STEP scheme in Lancashire […] We have been talking a lot to government and this is a model they feel very comfortable with.”

Bond is far less upbeat about prospects on the education front. Rydon is on the Partnerships’ for Schools academies framework, but with the £55bn Building Schools for the Future programme cancelled last year this is unlikely to yield as much work as the firms on it had hoped - even though being on the list at least gives them a chance at what work is available. “It’s been a very difficult period. Unfortunately things keep changing with this government.”
Bond’s strategy here is to go small. “We will probably be doing more refurbishment and some smaller schools,” he says. “We won’t be doing the big landmark buildings because, as a country, we can’t afford it. I think this change will take out some big players.” Again, it’s the firm’s agility that Bond hopes will see it through - whereas bigger companies may flounder and sink.

Bond lists regeneration and urban renewal, sustainable housing and maintenance as the three other divisions taking up a lot of his time at the moment. The first is a direct response to the market where the larger capital building projects have all but disappeared: “We used to do schools [and] large community hospitals worth up to £60m. Now you might refurbish a hospital instead of building a new one - it’s a drip, drip approach because the capital investment just isn’t there anymore.”

As for housing, Bond says it’s a question of taking stock and keeping an eye on the market: “We’ve got about 3,500 housing units under our control and amid all of the planning controversy we pushed a lot of applications and were very successful. We’ve won a lot of appeals and we decided to secure those consents but not build them out at the moment because, frankly, the mortgage market is looking pretty grim. So we’ve had to say: ’that won’t necessarily be a good use of our money.’”

He is quick to point out that, actually, this puts Rydon in a strong position: “As a business we’ve got no debt,” he says. “So consider a business like mine with control of 3,500 units without any debt - that’s quite a story.”

And then there is the maintenance division. This is arguably the golden goose of Rydon’s portfolio with a £500m order book just a year after Bond bought the division into the fold, following the acquisition of Equipe for £153m: “We have a very reactive maintenance business,” he says. “The order book is £500m at the moment though that is stretching over several years and some of our projects are lengthy and span five, 10, maybe even 20 years at a time. But that’s all secure.”

Part of the reason for Rydon’s success is Bond’s own military sense of discipline: “You have to stick to some disciplines otherwise it all gets too chaotic,” he laughs. “My kids say I am totally boring because I know exactly what I am going to do every day. But this is the way I work and it means I am confident about the business.” But against this single-minded determination is a flexibility of outlook, a readiness to respond challenges: “You just have to adapt, which is something we have been doing for 20 years. We are constantly adapting our model, focusing on what we’re good at. And it works because clients want to talk to us. They see us as a safe pair of hands and they’re right.”