School acoustics: Can you hear me at the back? 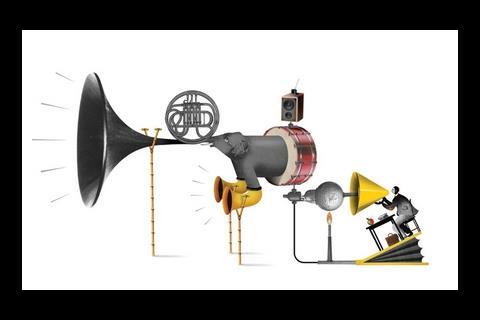 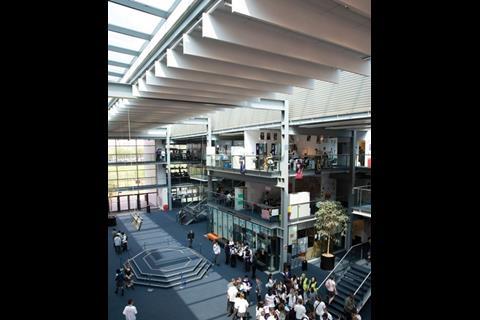 £600,000 was spent at Bexley academy on remedial work, including installing glass partitions between the classrooms and the atrium

Teachers are being drowned out, education is suffering, and yet acoustics in schools seem to be getting worse, not better. Stephen Kennett reports on a rules review that could change the way we build

In 2002 Tony Blair opened the Bexley academy in south-east London, the first of his government’s programme of city academies. The Foster and Partners-designed scheme was revolutionary and controversial. The 1,350-pupil school was open plan, with 20 classrooms opening onto three light-filled atriums. The idea came from the chief executive at the time and was meant to promote transparency and interaction. It won a RIBA National Award and was shortlisted for the Stirling prize. By June 2008, however, Bexley was deemed to be “failing” and earmarked for closure. The academy, aware that the design of the school was making teaching harder, had already carried out remedial work a year earlier, installing glass partitions to separate the classrooms from the atriums and internal circulation spaces. The bill was over £600,000.

The problems at Bexley highlight the high price of getting the acoustics wrong in a school. Since its construction, the Department for Education and Skills (DfES) has published new guidance and technical requirements for the acoustics in new school buildings. Despite this, it seems many are struggling to get close to the legal requirements, and the lack of mandatory post-completion testing is allowing them to get away with it. Now, a new review of acoustic testing is under way, but with more and more schools opting for open-plan designs, is it too little, too late?

Earlier this year the National Deaf Children’s Society (NDCS) launched its Sounds Good campaign, which calls for acoustic tests to be carried out in all new schools and the results made public. In a letter to the government, the NDCS says it believes acoustics are being treated as a low priority and claims it has come across a range of newly built schools around the country that fail to meet government standards. “There is widespread concern over the quality of acoustics in our schools and the negative impact this has on children’s learning, particularly those with an additional need,” says Brian Gale, director of policy and campaigns at NDCS.

John Bangs, head of education at the National Union of Teachers, agrees that many new schools can be hostile environments. “It is unacceptable for new buildings to be planned without consideration of special educational needs. We need greater monitoring at planning stages including pre-completion acoustic testing.”

It is not only deaf children – most of whom are now taught in mainstream schools – who are affected by poor acoustics. A report of existing schools by Pricewaterhouse Coopers found that over 41% of headteachers said acoustics and noise levels in teaching spaces negatively affected teaching. David Canning, an educational audiologist and qualified teacher, says: “It’s easy for a teacher to control an environment if they keep the kids quiet and just talk to them, but when you want them to do group work, which is 60% of the time or more, it becomes a problem. When there are good acoustics, there is better behaviour and teachers don’t need to strain their voices constantly.”

The acoustic requirements needed to meet Building Regulations in England and Wales are set out in Building Bulletin 93, which was introduced in July 2003. Areas covered include background noise, noise transfer between rooms and reverberation times – the amount of time it takes for a sound to die away.

Despite the design requirements in BB93, it’s not mandatory for the completed building to be tested. “It’s a major flaw and the consequence is that poor reverberation times and inadequate sound insulation will only be revealed once the school is occupied,” says Martin Jones, managing director of acoustic engineer Pace Consult. “Making testing mandatory would highlight workmanship issues or show where substitutions have been made in the specification to cut costs.”

Gale agrees that mandatory post-completion testing is vital. “Without this, there is little incentive to comply with standards, and vast sums of public money will continue to be wasted creating new classrooms that are not fit for purpose.”

There are incentives for testing. BREEAM offers credits for post-construction testing and the cost is relatively low – typically it ranges from £1,500 to £3,000 for a 1,000-pupil school. But as Jones points out, the costs can soar if problems are revealed and remedial work is needed, especially if it means altering partitions or installing new finishes.

A chance to improve

Although acoustic design is not addressed by Cabe’s new school design standards (see news section), things still could be about to change. BB93 is now undergoing an interim review, its first since being published, and mandatory testing is on the cards. The hope is that its introduction will increase compliance significantly in the same way that it did for the housebuilding sector.

When there are good acoustics, there is better behaviour and teachers don’t need to strain their voices constantly
david canning, educational audiologist

However, Richard Daniels of the DfES’ schools building and design unit, points out that there isn’t any evidence that workmanship issues in schools are anywhere near as poor as they were in housing. What Daniels says is needed is an appreciation of acoustics by designers. “We need an acoustician to be brought on earlier in the design; that’s when you can have the biggest impact. Once you’ve done the layout, it’s too late, you can’t fix it very easily.”

In the run-up to the BB93 review, the Institute of Acoustics convened a workshop to discuss areas of concern. The topic of reverberation times was raised and among the suggestions was a need for different targets to suit the different needs of primary and secondary schools. Concern was also voiced about the application of “alternative performance standards”. These enable designers to get Building Control to sign off designs that break away from BB93 if, for example, they state that an area will not be used for group learning. Some felt these measures were often instigated by contractors to cut costs and that many clients didn’t appreciate what they would be getting when they agreed to the changes.

Is open plan a good idea?

The main area where alternative performance standards are routinely applied is in open-plan areas and these throw up the biggest challenge for acousticians. Open-plan learning spaces were a trend in the late sixties and early seventies and are making a return in the current crop of academies and Building Schools for the Future (BSF) schemes. According to Emma Greenland, associate at WSP Acoustics, there is a danger that the mistakes of the past, when many schools required remedial work to improve poor acoustics, might be repeated.

The growth of open plan is partly down to the trend for personalised learning and also because they appeal architecturally. However when these spaces are used for multiple group learning, noise levels can make teaching almost impossible.

BB93 states what the criteria should be for an open-plan space in terms of a speech transmission index, with values between 0 and 1. However, to calculate this, designers need to have a good idea of what activities will take place in the space in order to predict noise levels.

The challenge, says Greenland, is that often with BSF one design will be rolled out across an area and there isn’t the chance to discuss with end users what they want and what the activity plans are for these spaces. “Without this you can’t get a realistic prediction of noise levels. What it boils down to is the need to get early liaison with the end user, let them know what the limitations of these spaces will be and what activities they can carry out and what they can’t.”

Partnership for Schools, the government’s school delivery agency, recognises the challenges that open-plan spaces pose. A spokesperson said: “Because BSF calls for a variety of learning spaces – including some open-plan areas – we recognise there is an even greater challenge to ensure that effective learning can take place any time, any place. It is therefore a requirement of BB93 that acoustics experts work with designers and the school to ensure that such areas do not present a barrier to learning.”

Greenland says the decision to go for open plan needs to come from the school rather than being imposed by designers. Educational audiologist Canning agrees and says the shift to open plan can be the root of a lot of acoustic problems. “I can see open plan will be difficult and may not work. It feels a bit like a big experiment at the moment.”

A better approach, suggests Greenland, is to look at semi-open-plan spaces that use partial partitioning and also limit the number of groups that simultaneously use the space.

The design requirements for open-plan spaces are also being looked at in the BB93 review. Currently, the focus is on speech intelligibility but this could be combined with requirements to prevent noise carrying between different groups within the space.

The revisions to BB93 are at draft stage and should be out later in the year. But as Canning suggests, maybe what is required are some detailed post-occupancy evaluations of the current crop of schools. “So many schools go for open-plan designs,” he says, “but no-one has tested them to see how well they really work …”