Should you believe the hype? 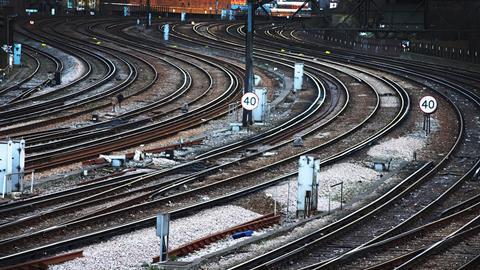 Do the government’s claims in its spending review stand up to scrutiny?

Last week chancellor George Osborne and his Treasury secretary Danny Alexander together unveiled a review of government spending that purported to give a long-term view of increased capital investment in the UK, with £300bn of funding earmarked for the five years from 2015. Of this £300bn, Alexander spelled out how £100bn will be spent on construction and infrastructure projects, particularly roads, railways, schools and housing.

The plan allows Osborne to claim that government investment will now be higher as a proportion of national income in this decade than in the last, with Alexander making a number of specific claims about individual commitments to specific sectors.

Of the £100bn between 2015/16 and 2020/21, £28bn will be spent on road projects, £44bn on rail projects (including £16bn for the start of work on HS2), £21.5bn on schools and £3.3bn on affordable housing. The government’s infrastructure tsar, Lord Deighton, told this week’s Government Construction Summit that the £100bn plan, called Investing in Britain’s Future, was a “wonderful document”.

“I had a list of requests from the spending round, and this put a tick in every box. It’s a consistent planned approach.”

However, despite the fanfare, last week’s announcement contained no new money for construction - previous Budget and Autumn Statements had broadly signalled the £300bn of capital cash. What was new was the identification of where this money will be spent, in broad areas, so far in advance, with Alexander making clear the point of this was to allow the industry to plan and invest accordingly.

Given the climate of acute spending austerity, does this settlement genuinely represent a boost for construction, and, importantly, do the specific claims about spending stack up?

This claim is designed to emphasise the government’s prioritising of capital spending in difficult times, in direct comparison with Labour’s supposed profligacy when in power. However, it is disputed, with the Institute for Fiscal Studies (IFS) protesting that the Treasury has not supplied enough data for it to be possible to definitively calculate the claim’s veracity.

The IFS says that working from the overall investment figures published thus far, which run only to 2017/18, and therefore do not include the last two years of the decade, public sector net investment is set to be lower in the current decade than in the last. Under this measure it says an average of 1.7% of national income will be invested in the current decade, compared with an average of 1.8% in the previous 10 years.

Net investment measures the overall improvement to the stock of the nation’s assets by subtracting depreciation from the amount spent. Gemma Tetlow, programme director at the IFS, says that for Osborne’s claim to be true, capital investment would have to ramp up significantly - by nearly 50% - in the last two years of the decade. Likewise, Tetlow says gross investment, which measures actual pounds spent with contractors, is also unlikely to show an increase although they have not made this calculation.

It is worth noting that with economic growth predicted to return to the UK later in the decade but capital spending flat, the plans will see net investment as a proportion of national income actually falling from 2015 onwards.

Osborne’s claim also hides the huge reduction in investment undertaken when the coalition came to power. In the last year of the Labour administration public sector net investment as a proportion of national income, temporarily boosted by the post-crash fiscal stimulus, was running at just under 3.5%, more than twice the level envisaged under Osborne’s plans.

So overall, the government’s programme shows investment flatlining at a modest level - around £50bn a year. Paul Johnson, director of the IFS, said last week: “What [Osborne] did not announce was an increase in public sector net investment. Despite the hype, net capital spending is not set to rise. We are hardly entering a new era of massive infrastructure investment.”

This is a claim that the government has been making of the investment programme for the rail network since it published the High Level Output Specification document - which sets the framework for Network Rail’s five-year investment programme - in July last year. In that announcement, which detailed £9.5bn of projects, deputy prime minister Nick Clegg called it the biggest expansion in railways in over 150 years, and Osborne said the government was “making more funds available to invest in rail projects than at any time since the Victorian era”.

The government has not been able to provide Building with the specific evidence to back this claim up. Certainly this claim does not appear to be true when applied to Network Rail’s proposed capital spending programme for 2014-19, which does not even appear to be in real terms larger than the current programme. The draft determination of the 2014-19 programme from the rail regulator said that £24.4bn of capital investment will occur in that period, compared with £23.98bn for the current five-year period (2009-14). However, these figures are not inflation adjusted. After adjusting for inflation, the 2009-14 investment rises to the equivalent of over £27bn in today’s money - far more than the amount proposed for 2014-19.

However, the claim looks likely to ring true if one broadens the scope of rail work further beyond the £9.5bn of schemes referred to last year, to include the proposed investment in HS2 - not part of Network Rail’s budget. Alexander said £16bn would be spent on this before 2021, and put next to the fact that the length of the rail network halved in the second half of 20th century, with few new rail routes built, it makes the claim not unrealistic.

Nevertheless the government has not provided evidence to back the claim up, either with data on the number of network miles added, or with inflation-adjusted investment figures.

Of all the claims made last week, this appears to have the most merit. The Treasury documents include an inflation-adjusted table of investment in the strategic road network since 1960, showing a peak in 1970 at around £2.5bn per year, falling to a low in the year 2000, and rising to around £1bn a year by 2010. The government committed to more than treble this rate of investment by 2020/21 to £3.8bn, and will legislate to ensure the commitment is delivered by any forthcoming administration after the next election. Of the £28bn overall roads commitment, £10bn will be spent on repairs to existing trunk roads and local roads, with the rest going towards new roads and improvements at key congestion points, including a commitment to add an extra lane to the busiest motorways.

However, the commitment is not without problems. The focus is very much on trunk roads, with the spending profile showing that funding for local authority roads will not change over the five years from 2021 - which implies a real-terms fall when inflation is factored in.

In addition, the major uplift in capital funding indicated by the commitment will be very difficult to meet from the Department for Transport’s existing capital budget - which the Spending Round showed will rise in 2015/16, but only by 5.5%. This means that with expected receipts from road tax and vehicle excise duty falling, it creates a future funding gap that will only be met either by raiding other Whitehall budgets, or by finding new revenues from road charging.

The government has so far refused to commit either way on introducing road charging, and a long-awaited consultation on the issue was not published alongside the Spending Round, as had been hoped, with a spokesperson saying it will be published in due course. Either way, it will be difficult for the government to introduce an unpopular road-pricing policy before the next election. Alasdair Reisner, public affairs director at the Civil Engineering Contractors Association, says: “The government is effectively creating a liability with this commitment so the money will have to be found from somewhere. If they’re not getting the money in, the future government will either have to de-legislate or raid other departments. This is very difficult if it’s not clear where the money is coming from.”

Alexander set out plans for a £3.3bn programme to deliver 165,000 homes over three years - a run rate of 55,000 homes per year. In terms of number of houses built, this claim is true - just. In the last 20 years the closest comparison is Labour’s 2008-11 programme, which delivered 162,500 homes in its three-year life. However, in terms of the funding allocated, the programme amounts to more of the same on the 2011-15 allocation of £4.5bn over four years, and is a huge reduction on the level of funding committed by Labour, with £8.4bn spent in 2008-11.

The difference in funding rates is accounted for by the fact that the coalition is aiming to build a very different product to that funded by Labour, with rents much closer to market levels, meaning less subsidy is required per house. Housing associations have raised concerns about their ability to fund these homes because of the requirement for them markedly to increase their borrowing, and draw in increasing levels of cross-subsidy from larger numbers of homes for sale or market rent.

With the allocation for “affordable rent” housing - as the product is called - at £957m per year, and the number of homes required even greater than in 2011-15, the subsidy for each home will be smaller in this programme than ever before, putting further pressure on associations. An analysis by the Future of London lobby group, published last month, shows that 87% of tenants for the new affordable rent homes in London are eligible for housing benefit, meaning the capital “saving” from higher rents will lead to a rise in the government’s housing benefit bill.

Steve Douglas, partner in housing consultant Altair, and a former chief executive of the Housing Corporation, adds: “Three billion pounds is not a game-changer. We need a doubling of that programme before we can start to meet the backlog of housing supply.”