Sketch of the week: Blue Mosque

This week’s #buildingdoodle sketch is by Félicie Krikler, associate director at Assael Architecture 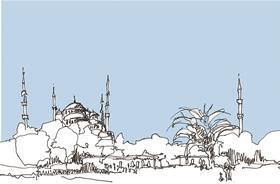 This week’s #buildingdoodle sketch is by Félicie Krikler, associate director at Assael Architecture and was drawn on a trip to Istanbul. The sketch shows the Blue Mosque with its fluted minarets, a prime landmark of the skyline of the city. The Sultanahmet Camii (in Turkish) was built between 1609 and 1616 and is as impressive on the outside as it is on the inside. Interestingly, when the number of minarets was revealed during construction, the Sultan was criticised for being presumptuous, since this was the same number as at the mosque of the Ka’aba in Mecca. He simply overcame this problem by ordering a seventh minaret to be built at the Mecca mosque.

To submit your sketches for publication please email building@ubm.com or post via Twitter using the hashtag #buildingdoodle