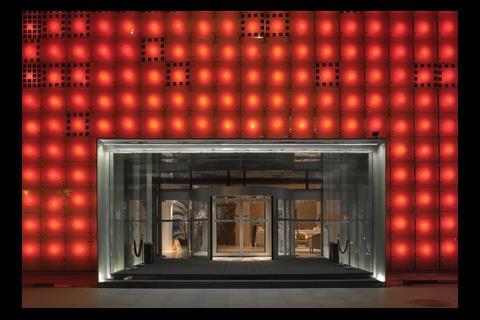 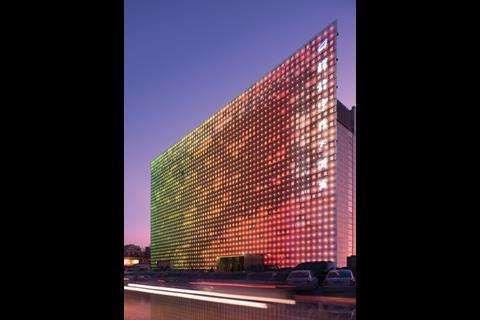 For Simone Giostra the Xicui Entertainment complex in Beijing is the culmination of almost a decade of work. The New York-based architect, who specialises in designing curtain walls and building envelopes, is responsible for the 2,300m2 “media wall”, which occupies the entire eastern facade of the eight-storey entertainment centre in the west of the city.

The brief from the client was very vague, he recalls. “The one thing the client did want was a guarantee that my design had never been done before, which is usually the opposite of what they want in New York.”

Presented with such an open brief, Giostra seized the opportunity to put into practice ideas he had been working on for a “narrative facade” and combining it with the LED and photovoltaic technologies he had also been pioneering since the nineties. The resulting media wall is Beijing’s first venue dedicated to digital media art.

Located next to the baseball and basketball venue for the Olympics, the box-like building is prominent, but in itself wasn’t particularly inspiring, says Giostra. “It’s an entertainment centre that doesn’t need much light or connection to the environment. The screen becomes a way of communicating.”

But forget any ideas of a pumped-up version of the electronic advertising hoardings in London’s Piccadilly Circus. The design is intentionally low resolution. “We wanted to enhance the abstract visual qualities to see how little information we can get away with,” says Giostra.

Nor is the content commercial. Instead, it is intended for artists to display their work and give people a way to experience it. “The client understood that the success of the project depends on this. If you put commercial content on the wall, people will switch off.”

In contrast to the power-hungry city that is Beijing, the other aspect of the design has been to make the display as self-sufficient as possible, which meant they had to find a way of integrating photovoltaic technology into the glass, which could collect energy during the day and be used to power it at night.

The wall is made up of several layers. On the front surface are 900mm x 900mm glass panels mounted on a steel frame, which in turn is hung off the existing facade. Behind each of these is fixed an LED light source that can project red, green and blue light onto the glass. There are a total of 2,292 of these, each of which can be controlled independently – like a pixel on a computer screen – and which, when linked together, allow images to be displayed across the wall.

The biggest challenge was developing the glass panels. Giostra collaborated with Arup to come up with the technology, which uses laser cut polycrystalline cells laminated between two sheets of glass. According to Steve Walker, Arup’s team leader on the project, the improving capability of PVs and LED lightsources meant there was scope for installing an effective lighting system, without having to cover the facade completely in order to power it.

During the daytime, the photovoltaics manifest themselves as a subtle design printed on the building’s surface, which is meant to look like ripples on water, and leave a large degree of transparency. However, also compressed into the same lamination behind the PVs is a layer that diffuses the light projected from behind. “The light needs a surface, otherwise it would go straight through the glass and you wouldn’t see the facade,” says Walker.

The brightness of the screen at night is around two or three times that of a typical desktop LCD screen. Calculations show that the photovoltaics will gather more energy over the year than the lighting consumes, provided they are switched off during the day.

The strategy is for the system to gather energy during the day, which is fed into the building and used to offset its daily consumption. At night the lighting draws its power from the grid. This resolves the need for storage batteries – which have toxic material issues – but also overcomes the obstacle of how big to make the area of photovoltaic cells. “In the winter it is more likely to be overcast and you have to design your system so it can collect enough energy to operate for six to eight hours in the evening. In the summer the opposite is true and you collect more energy and have over supply.”

With all the LEDs switched on and producing white light – which requires red, green and blue sources – the facade will draw over 10kW of power. “This is a pretty boring and dull image to be watching all the time and it’s a reasonable assumption that in practice there will be a still image or moving media playing,” says Walker. From studies Arup did, when this is the case the power consumption will be reduced down to around a third of this.

The development of the wall has taken about two and a half years: one and a half years on prototyping and development – a year longer than was envisaged. But Walker explains that the Chinese manufacturers had never done anything like this before and needed time to get the quality right. The modular format meant installation was relatively straightforward.

Artists from China, Russia and the US are among the first to have their artwork displayed, none of whom had experience of working on such a scale before. To help them they had access to Giostra’s in-house simulation software. This was developed initially to demonstrate to the client how artwork would appear on the wall, however artists can use the same software to preview their own work and see how it will appear at different distances in low-resolution format.

So, after finally reaching his goal, can we expect to see a rash of media walls springing up around the world? Giostra has already turned down an offer to create one in Nigeria, but says he will make use of the experience.

“I never repeat anything twice, but I already have in mind, if the opportunity arises, how to make this media wall even more exciting – but I won’t tell you how.”

Walker is a bit more forthcoming. “At the moment we have a facade that is clipped on to an existing building, but I can imagine a product where you can apply them to panels where you have a degree of light transparency, which also gathers energy and gives a different character at night that you can build into the design.” Maybe it won’t be the last media wall we see after all.