Carillion’s new £430m super-hospital in Bristol can lay claim to being the greenest hospital in the UK - and it’s all thanks to some fresh thinking on ventilation.

How do you design the most-sustainable major acute hospital in the UK? This is the challenge answered at the new £430m Southmead Hospital in Bristol. Designed by multidisciplinary architect BDP as a PFI scheme for Carillion and the North Bristol NHS Trust, the 1.2 million ft² super-hospital, which will serve a population of half a million, opened earlier this month and is Carillion’s largest ever UK construction contract.

Built on a 27ha site, the facility replaces outmoded hospital buildings and contains 800 acute beds and 24 theatre suites, as well as a helipad. Some 75% of patients will be in single en-suite rooms - the highest proportion of any major UK hospital - with 25% in small four-bed single-sex wards. The hospital plan is divided by a continuous, full-height central atrium, generously configured like an urban street, and supplies are transported through corridors by robots. It’s all part of the North Bristol NHS Trust’s ambitious plan to make this the most modern hospital in the UK. One of the most radical parts of this plan is the sustainability strategy - the interesting thing is, it is also one of the most simple. 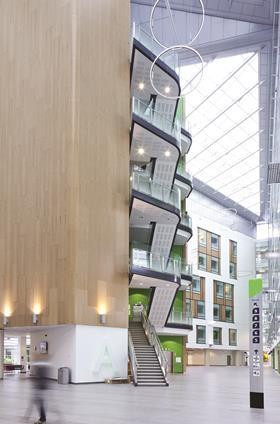 This strategy is primarily based on two traditional environmental principles: daylight and ventilation. “There’s an assumption that sustainable design has to be high-tech,” says Andrew Smith, BDP’s head of healthcare and Southmead chief architect, “but simple low-tech solutions can be just as effective.”

Hospitals have obvious heavy services demands and mechanical ventilation accounts for a huge portion of this energy use. Moreover, most major hospital buildings avoid having openable windows for all manner of reasons such as acoustics, pollution, safety and the limited value of cross-ventilation on deep-plate floorplans. But at Southmead, half the hospital is naturally ventilated, slashing the amount of energy required to run the building.

The hospital’s floorplan has been specifically configured to maximise natural ventilation. The soaring atrium space that acts as the hospital’s circulatory spine essentially divides the building in two. The patient wards are located on the eastern side and these are entirely naturally ventilated. The concrete frame wings on the western side are collectively known as the “hot block” and these contain the heavily serviced diagnostic and treatment areas that are at the core of hospital facilities, such as operating theatres, imaging labs, endoscopy suites and critical and intensive care units, all of which are mechanically ventilated with heat recovery systems also in place.

The patient wards are arranged within three steel framed U-shaped finger blocks that extend from the central street. Landscaped courtyards are located within and around these blocks, offering generous views from patient rooms and providing the kind of tranquil, natural environment that is a key psychosocial aid to physical recovery. 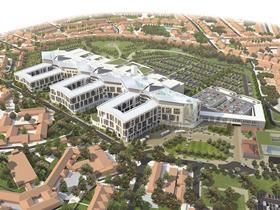 Crucially, the patient ward wings also have a shallow plan with single-occupancy en-suite rooms arranged around a central corridor. This maximises the effect of natural ventilation and also provides intermittent opportunities for cross-ventilation - environmental benefits that would be impossible to achieve on deeper floor plates such as at the new Royal London Hospital in Whitechapel, east London. Also, Southmead is located within a quiet suburban area, relatively free of the noise and traffic fumes that commonly prohibit openable windows in hospitals in more inner-city urban contexts.

Safety tends to be the final main concern that dissuades many hospitals from having opening windows but this too has been directly addressed in the design by clever window detailing. Patient room windows are normally split into two sections. The largest is a clear, fixed pane of glass that allows the generous views into the courtyards and out towards the scenic countryside that surrounds the city. The second, smaller section is a recessed vertical glass panel to the side of the main pane. This opens onto a shallow void closed by external louvres, thereby permitting air flow but preventing external access. The design also ensures that glazing bars or mullions do not obstruct the view through the larger pane.

As well as the clear environmental advantages of natural ventilation, for Smith, the simple act of being able to open a window presents a whole gamut of psychological benefits related to patient independence and empowerment - although he points out that these benefits aren’t appreciated everywhere. “In Denmark [for example], hospitals actually tend to frown on openable windows and opt for mechanical ventilation instead. This is because they prefer to prioritise the heat recovery benefits available from mechanical services and are reluctant to see these wasted by open windows, particularly in winter.” 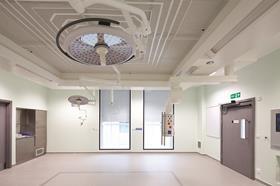 One aspect of the hospital crucial to its heavy use of ventilation and natural light is the central street. This was heavily inspired by Norway’s pioneering Oslo University Hospital, where a central atrium is flooded with rooftop daylight and has the feel, aspect and animation of an urban thoroughfare.

The concept has been applied at Southmead to similar effect. The central atrium is surmounted by a glass roof that admits considerable amounts of daylight, while a sequence of subtly modulated spatial conditions - using a variety of colours and materials, such as render, concrete and timber - mimics the diversity of an active urban street and suppresses the institutional character one might expect from a hospital. As the atrium is the hospital’s primary circulation route, it also provides access to a mix of access point to stairs, lifts, medical and refreshment amenities that further animate its hub-like character.

The street is crucial to the hospital’s ventilation strategy, as Smith explains. “The street is naturally ventilated too and it has enough volume to create considerable air movement. The strong presence of natural daylight also helps reinforce the daylight strategy present in all areas of the hospital - as well as the wards, 80% of the operating theatres in the hot block are naturally lit.

“Also, in terms of heat loss, it’s normally preferable to have less external envelope. But the street and the shallow plan of the blocks increases the hospital’s surface area to volume ratio without increasing its envelope.” 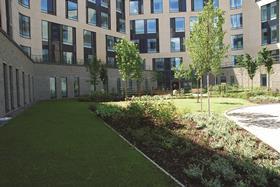 There are other instances of Southmead’s design and environmental strategies interweaving effectively. Twenty per cent of the hospital’s energy is drawn from renewable sources. A basement energy centre holds a biomass boiler run on woodchip pellets made from local trees. The energy centre has been strategically located right in the middle of the building in order to equalise the distance power has to be transferred to any part of the hospital.

The building’s external facades also reflect the wider environmental strategy. The ward block facades are configured as reconstituted stone surfaces rising above a ground floor plinth of Pennant stone. This not only recalls the construction of the original hospital buildings but has been locally sourced from the Forest of Dean.

PFI is a procurement route that has come in for its fair share of design criticism in the past but, for Smith, it was central to realising such an ambitious sustainability strategy on a building as large and traditionally services-reliant as a hospital. “We had an integrated design team right from the start and we were able to tweak the design as we went along. The procurement route also ensured attention to detail over a very long period of time where there are disproportionate periods of production.

“These kinds of advantages are crucial on long, big projects. It’s easier to design an elegant little racing yacht than it is to design a vast ocean liner, but here, I think we were able to deliver the control and attention to detail that meant that we were able to achieve both.”