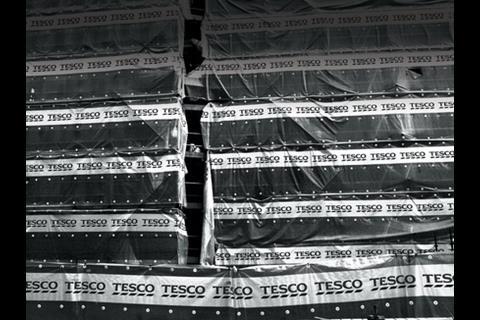 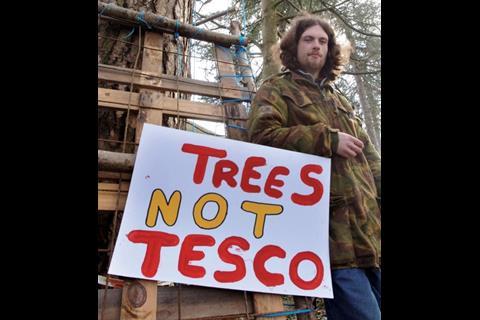 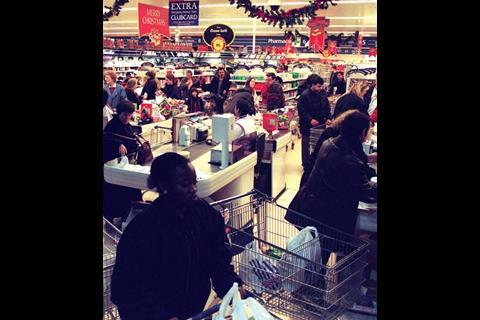 Britain’s most successful business (probably) is one of the construction industry’s most important clients (definitely). Yet rumours of strife in its supply chain and a rush of bad publicity appear to be undermining its position.

Tesco is the most coveted client in UK construction, and the second biggest in the world. This year it plans to build 560 stores comprising 2.1 million ft2, following a £1.4bn, 140 unit programme last year. Not only that, it is arguably the UK’s most important company, employing 260,000 people, and so is a darling of the Labour government.

In the City it is feted for its outstanding results – earlier this month it reported a pre-tax profit of £2.6bn on turnover of £46.6bn – equivalent to making £5,000 every minute. Not bad for a company that started life as a shop in the rundown north London suburb of Burnt Oak, and which made a profit of £1 on its first day.

However, Tesco is a client in strife. Building can reveal that a significant row has resulted in the removal of Kier, one of the five major contractors that it regularly does business with, from an advisory role and that the retailer’s property division has suffered a string of departures owing to disagreement over the make-up of the team. This is on top of Channel 4’s Dispatches programme in February, which accused Tesco of exerting pressure on councils during planning disputes. And then there were the successful protests against proposed stores in Sunderland, Hertfordshire and south-west London, and the long-running argument that Tesco stores are stripping high streets of their grocers, butchers and bakers.

Contractors chosen for Tesco’s framework can work on more than £100m of projects every year. The work is typically design and build, and margins are said to be around the 4.5% to 6% mark. The framework itself is fluid, and even a Tesco spokesperson admits he is uncertain how many contractors sit on it, although it is understood that it has moved from nine to 12 in recent weeks. Now called “the main contractors framework”, it was previously known as the G8, G9 or G12, depending on the number of contractors it contained.

Within this body is a group of major national contractors, until recently known as G5, that win the bulk of Tesco’s work. They are the ones able to undertake its major mixed-use schemes, worth maybe £30-40m. Until three months ago, these were Taylor Woodrow, Costain, Barr, RG Carter and Kier. “Tesco uses us for strategic issues,” says one member of G5. “We get the most work off Tesco in terms of volume and we discuss issues such as planning for labour resources, such as areas with potential skills shortages, and generally understanding the market.”

It’s a prestigious advisory group, then, that helps Tesco shape its thinking, and puts the G5 in a strong position to win contracts. However, Kier was taken off three months ago after a row over several outstanding issues. A source close to Kier says: “When there were problems and issues with some payment, Kier wasn’t afraid to stand up to them about it.”

A source close to Tesco says the row was over poor performance, and the official line is that Kier remains one of Tesco’s valued contractors. Kevin Grace, Tesco’s property services director, says that the company has “a strong relationship” with Kier, pointing out it was very pleased with the work the contractor did on an environment-friendly store in Shrewsbury.

He adds: “As with any department within a commercial organisation we monitor and review our relationships and as you would expect we make occasional changes; we simply wouldn’t be performing properly if we didn’t do this.”

Whatever the nub of the argument, a source who is familiar with Tesco’s tactics says: “Kier stood up for itself and was made an example of.” “Nobody in their right mind is going to piss off Tesco,” adds a leading retail figure. “They’ll keep quiet if they have a complaint because working for Tesco gives you kudos – it is renowned for working with the best.”

Kier itself hopes to get back into the G5. In a statement to Building it said: “We are not currently included on the G5 but have been assured that this is under review and are working to regain our position.”

A question of prices

But their silence does not mean the problems are not there. The chief executive of one of Tesco’s main contractors says the supply chain was being “screwed down as far as possible to save money”, although another says the pressure is little different to that at other major retailers.

In an interview with Building last year, Tesco’s then-development director Tony Vasishta admitted that Tesco demands that costs are minimised: “We’re obsessed with providing the best service for customers and that means the best prices. The only way of doing that is to get the best prices from our suppliers.”

One example of how Tesco looks for savings is in the way it hosts visitors. “We asked for tea and coffee when we went for meetings at Tesco’s office but were told we had to pay for it ourselves,” says one contractor. “We were gobsmacked.”

The Tesco spokesman confirms: “If our suppliers and clients want coffee it costs 40p in the cafe. It’s a hard working ethic.”

For some that is fine. A Costain spokesperson says: “We’d expect a company the size of Tesco to be as efficient as possible when it comes to costs.”

Despite criticism from parts of its supply chain, Tesco is regarded as an excellent business by its former employees. Neil Sachdev, the group’s former head of property, says: “Tesco has an exceptional business model and is essentially a great company.”

As much as he waxes lyrical, the fact remains that Vasishta chose to leave in March to join retail developer McArthur Glen. And when Vasishta left, there was a mass exodus from the property team; six other directors followed, amid rumours they were dissatisfied that most of their bosses had retail and not construction backgrounds.

They felt that the lack of construction expertise in the higher ranks meant that there was little understanding of supply chain management or procurement. Vasishta has been in construction for 20 years and once ran his own QS firm. Mark Cammies, the programme director left at the same time as Vasishta. Vasishta said: “Mark and I are strong construction people and a lot of people could be taking the opportunity to go as we leave.”

Others who handed in their notice included Bob Tragheim, the procurement director, Helen Dodd, the design director, Pat Jubb, the head of engineering and Brendan Hastings, head of small projects.

It is understood that a number of project managers also left.

Although Tesco argues that there is nothing unusual about this, it is thought the catalyst for several of the departures was the appointment in January of Grace as director of property services – the top job in the division. Grace was previously chief executive of Tesco in Poland and has more experience in mergers and acquisitions than in property.

One source close to the property team said: “Tesco needs to rethink. It is the second biggest construction client in the world and it needs a team headed by someone who can relate to its supply chain. It doesn’t need shopkeepers who have learned about property. It needs property experts with a passion for supermarkets.”

The exodus is expected to continue after the group pays its annual bonuses in May. It is understood that at least three members of Tesco’s property team have approached Sainsbury’s in the past six weeks.

Despite having a branch in all but one of the UK’s postcodes, Tesco shows no signs of slowing down in its drive to roll out stores. The way it achieves its planning success is questioned by some.

One agent says that the chain submits plans for mixed-use developments to get permission more easily, even though the focal point of the schemes are the stores.

It is understood, for example, that the building surveying arm of one of the world’s leading property agents will not bid for work with the group because of its attitude to planning, and the chairman of a leading quantity surveyor makes the same point.

This year the chain’s planning drive forced it to defend itself after a report by the Competition Commission suggested that local businesses were being threatened by the emergence of “Tesco towns”, where no other companies can prosper. Earlier this month Tesco released a report denying this and called on the watchdog to broaden the definition of the local market.

Another investigation by the Competition Commission has now been launched at the request of the Office of Fair Trading (OFT). The probe will investigate the acquisition of a Co-op supermarket by Tesco in October, less than a mile down the road from its Slough store. Competition lawyers predict that Tesco will eventually be forced to sell its existing outlet.

A case in Sunderland has been even more controversial. Ruth Kelly, the communities minister, was unhappy with Tesco’s plans for its site in Sunderland and gave a local urban regeneration company permission to develop it. Tesco is now considering calling for a judicial review of the decision.

Now the backlash has begun to hit Tesco where it really hurts – in opposition from the public. On top of the OFT’s concerns, residents and businesses have run petitions and circulated flyers opposing the development of Tesco stores in their communities, not wanting to become part of a “single supermarket society”.

Organisations like the Federation of Small Businesses and Friends of the Earth support the opposition. Vicki Hird, a Friends of the Earth campaigner, says: “Tesco’s dominance allows it to dictate conditions to suppliers and drive high street stores out of existence. The time has come to put the breaks on the Tesco juggernaut.”

The important thing for UK construction is how Tesco comes through its problems.

It needs to ensure that it remains on good terms with its suppliers, keep hold of the people that so many say are the best in the business and keep the public onside. One of the problems with being as successful as Tesco is that there is so much to lose.

In 2006 Tesco announced that its future stores would be built using sustainably sourced glulam rather than traditional steel. It also launched a £500m initiative to tackle climate change. This involves putting a carbon footprint label on all food produced to enable consumers to make an ethical choice. The group has also made sure its delivery fleet uses a 50% biodiesel blend.

Tesco has three environmental stores, in Diss in Norfolk, Swansea and Wick in northern Scotland, which are serving as testing grounds for energy-saving equipment and ideas, before they are rolled out across the business.

These stores reduce energy use by about 30%, through measures such as lower roofs and ceilings, redesigned fridges to keep the cold in and motion sensors to automatically turn off lights when they are not needed. Tesco also plans to open environmental stores in the Czech Republic, Poland, Hungary, Turkey, South Korea, Malaysia and Thailand.

The history of Tesco

What do you think of Tesco? Comment on this story at www.building.co.uk/whatyouthink