Wages are still slowly on the up according to this year’s Building/Hays Construction consultants’ salary survey, but more significant is the drive towards recruitment in 2014, with firms seeking - and competing for - new talent to avoid skills shortages on the horizon 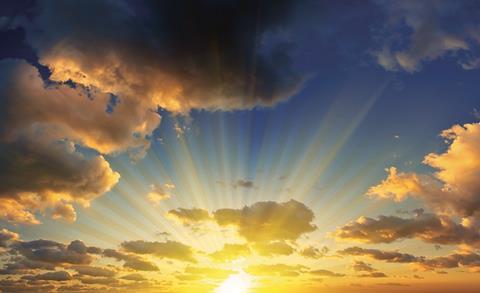 This year’s consultants’ salary survey provides more evidence that the UK construction industry is in recovery mode, with salaries across the surveying, engineering and architecture professions modestly increasing for the second consecutive year.

Across all three professions salaries for the year to March were up 1.96% on the previous year on average, which, while welcome, was below the rate of inflation of 2.56%, meaning most people in real terms were worse off.

But behind the headline figure is a mixed picture, with some surveying and engineering roles enjoying above 5% raises, and other roles, including landscape architects and interior designers, getting sub 1% or no increase. Once again salary rises in London outstripped other UK regions.

However, what unites most consultants is their predictions for recruitment in 2014. All indicators point to an exceedingly hot recruitment market this year, with recruitment agency Hays, which compiles the survey for Building, predicting this will be the year where salary growth finally outstrips inflation - easing construction’s own cost of living crisis. The majority of employers predict skills shortages (68%), a shortage of experienced candidates to fill roles (72%), salary rises (56%) and growth in headcount at their firm (58%). Meanwhile, employees are restless - 57% say they don’t expect career progression at their current firm and 45% expect to move this year, with a further one in five expecting to move within two years.

So what does this year’s salary survey tell us about the changing recruitment market in construction, and how are firms attempting to adapt?

Within surveying Hays says the recovery in housebuilding is partly behind the growth in wages, while QS firms are also “feeling the pinch from a lack of graduate recruitment during the downturn”. Hence surveyors took measures to attract new blood into the profession last year: firms upped graduate starting salaries, invested more money in training new surveyors and some even dropped the requirement for applicants to be chartered for certain roles, choosing instead to train successful candidates up to chartered status on the job. Within engineering, Hays noted increased demand for many roles, particularly in the housing, infrastructure and commercial sectors. The candidates in shortest supply were those with two to five years’ experience, again reflecting a lack of graduate recruitment by engineers during the downturn.

The fight for talent is definitely out there, the key thing now is that there’s additional pressure from clients trying to recruit

Multi-disciplinary consultant Ridge, which specialises in surveying and engineering, can testify to growing competition to fill these professional roles. “Over the past 12 months the boot has moved from the employer’s foot to the employee - they’re now in a stronger position,” says Phil Jones, Ridge’s senior partner. The firm has upped its graduate salaries “to compete” and Jones agrees it’s getting harder to recruit people looking for their “second or third jobs”.

Alan Brookes, UK managing director for consultant EC Harris, says the consultant has 70 to 80 vacancies in the UK, particularly in surveying and engineering, and the “number is increasing daily”. He says “the fight for talent is definitely out there, the key thing now is that there’s additional pressure from clients trying to recruit to build up their teams.”

Engineers WSP and Arup both say they are starting to see the effects of skill shortages, particularly in the infrastructure and structural engineering professions. “We are seeing greater demand for staff overall and off the back of that we expect to see demand going up and salaries outstripping inflation,” says Paul Newing, regional HR director at WSP.

In architecture, salary increases were more subdued last year, although Hays notes London experienced its highest level of recruitment in three years. Adrian Dobson, RIBA director of practice, says there is greater demand for architects with “BIM skills and experience of delivering it on projects”. He is not surprised wage levels have not increased greatly. Architects have been telling RIBA since the middle of last year they feel more positive about the future and plan to recruit, but headcounts remained static over the final two quarters. Dobson thinks he knows why: “According to our figures architects retained more staff than they needed during the downturn and so still have 20% spare capacity. There’s still quite a bit of spare capacity to be taken up before they really up recruitment.” That said, Make Architects, which is mostly exposed to the buoyant London market, is seeing “a lot more movement between practices”, according to head of HR Camilla Neave. The practice increased headcount by 25 last year and is continuing to expand, with “more of a focus on the technical side, including BIM”, Neave adds.

This year these trends are set to intensify.

“The upward trend in 2013 was encouraging, but 2014 is the year things will really kick on,” says Andrew Bredin, managing director at Hays. He says vacancy volumes and salaries have risen month-on-month since the start of 2014 and “there’s no sign it’s going to stop”. “We’re at that point in the cycle where the industry’s moving out of recession and skills shortages will start to be seen as the recovery gains momentum,” he adds. He expects average salary increases this year to outstrip inflation for the first time since the recession.

Employers are more positive about the future - 77% expect business activity to grow over the next 12 months, up from 63% last year - yet a significant number, over a quarter, say they do not think their organisation has the talent needed to achieve current business objectives. In these circumstances Bredin says it is “inevitable” salaries will go up “right across the piece. It doesn’t matter whether it’s engineers, architects or surveyors, all are in demand”, he says. 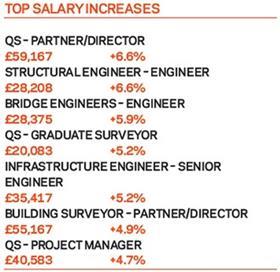 All the employers Building spoke to said they were investing more in training and development to retain staff. Yet such is the fight for surveying talent that Brookes from EC Harris reckons the firm may have to hold “half year [pay] reviews” in addition to annual reviews for some staff and give out an “interim rise” in some cases. He worries about “whether it’s sustainable, as I don’t see fees increasing as quickly [as wages].” Jones says Ridge is increasingly looking overseas to recruit engineers to make up for the shortfall. The 350-strong firm has plans to increase its headcount by up to 150 staff in the next three to four years, but Jones admits it may struggle to do this through recruitment alone. “It’s going to be a challenge to do that organically - I expect a mix of acquisitions too.”

Some employers are working together to try to solve the skills shortages dilemma. Arup is working with its competitors in key growth sectors including rail and energy to set up apprenticeship and graduate programmes to “build a pipeline of talent”, Simon Stoker, senior human resources officer in the UK at Arup, says. “We’ve got to be careful not to perpetually fuel salary inflation by poaching other people’s staff,” he says. “We need to have a sustainable pipeline of talent when there aren’t enough people to go around.”

As the recruitment market threatens to heat up quicker than workloads and fees, consultants will have to think in ever more creative ways to attract and retain talent.

John Allison enrolled for a building surveying course in 2008, aged 40, just as the construction market was tanking. At the time few employers were interested in taking on graduates to train them to chartered status and he had to settle for an unpaid internship, followed by a paid internship “at minimum wage” while he trained. Once he’d qualified, he secured a temporary job and then landed a permanent role with ease this spring. After receiving expressions of interest from other employers, he secured a permanent role at Anglian Windows at the “salary I was hoping for”. Allison is also chair of the RICS Matrics Group in Norfolk representing training or newly-qualified surveyors and he says the membership has gained “a lot more graduate trainees”, proof, he says, that “everyone’s out there training people again finally”.

The salary data is based on average salaries achieved by candidates placed within the past 12 months, compiled by Hays staff across the UK. Salary data is indicative and should not be viewed as a guarantee of salaries available. The qualitative results are based on a survey carried out in February and March 2014.