The Budget: Can George win the day? 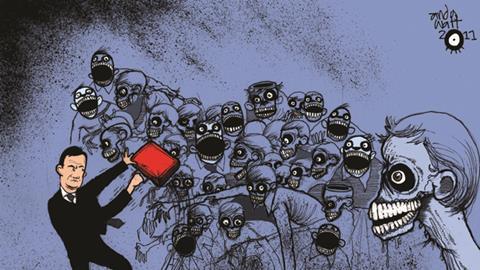 How do you fight off the threat of a double-dip recession with no weapons in your armoury? For George Osborne putting together next week’s Budget, the most obvious solution is likely to be deregulation. Here’s a look at what changes to expect

Next week when chancellor George Osborne steps out to deliver his first full Budget, he will be facing a daunting task indeed. Last week’s provisional construction output figures for January, showing a £0.6bn decline in output when economists were expecting a recovery from snowy December, will not have helped him either.

His Budget is being made from within a government under fire from many angles. The unexpected 0.6% fall in GDP in the last quarter of 2010 raised questions about the impact of the government spending cuts on consumer confidence and economic growth. In that context, last month’s attack by the CBI’s outgoing director general, supporting the cuts but accusing the government of having no strategy for growth, has hit home. Last week the British Chambers of Commerce was the latest to revise its 2011 forecasts downwards - and that was before the January construction data.

Last autumn’s spending review made it clear that the option of throwing money at the problem is not on the table. And with the government expected to borrow £149bn in 2010/11, taking the total public debt to £867.2bn, it’s easy to see why. So Osborne will attempt what is probably the ultimate magic trick: persuading the country and businesses that the coalition has a credible growth strategy, without having any money to invest in it. Crossrail and High Speed 2 aside, big spending promises are probably off the agenda, as are big tax cuts. Instead the likely focus is going to be deregulation in areas like planning and local government finance, or tax incentives in areas like sustainability.

Probably the most eagerly anticipated parts of the Budget for the construction and development industry are changes to the planning system. Deregulating planning to encourage economic growth has been widely trailed, with David Cameron labelling over-zealous planning bureaucrats one of the “enemies of growth”. There is speculation over a falling out between the Treasury and the business department on one side, and the communities department, which is pushing through the Localism Bill, on the other.

Commentators expect the centrepiece of planning deregulation to be extending the concept of enterprise zones. These are areas, first set up in the eighties, where a relaxed planning regime and targeted funding are used to encourage businesses to invest. The funding is rumoured to be capped at £100m, meaning the focus will be on planning deregulation. These zones set up a broad development plan, where developers don’t need planning permission - offering more certainty about the ability to invest in an area

The British Property Federation also mooted the idea of using clauses in the Localism Bill to allow businesses to set up pro-development neighbourhood plans - called neighbourhood development orders - in town centres or industrial estates. These could also have a relaxed planning regime.

Other possible measures include freeing up planning “use classes”, meaning developers may be free to build homes on land that was previously industrial buildings, or vice-versa. Business secretary Vince Cable has also mooted the idea of land auctions to stop developers from unnecessary land-banking.

One final measure to look out for is giving developers access to public land for building homes. Developers would not have to pay for the land until after homes were built.

The major expected development on the sustainability front is the news, as revealed by Building earlier this month, that the Treasury is set to give homeowners stamp duty rebates to retrofit their homes.

The step could help kickstart the government’s flagship Green Deal policy, designed to encourage energy efficiency improvements in homes and offices. It is thought necessary to incentivise homeowners to make the improvements, despite the fact the Green Deal is designed to take away the up-front cost.

David Strong, chief executive of Inbuilt, commented that one-off council tax rebates could also be made available alongside stamp duty incentives. “The level can be quite small to stimulate interest,” he says.

But Simon McWhirter of the WWF said that he thought that, despite public traction on green incentives, there would be no progress on the Green Deal until 2012.

The other area to look out for is the proposed £1bn Green Investment Bank. John Alker of the UK Green Building Council said: “The question is: will it have the power to go out and raise money in the private sector, to issue bonds and suchlike? People want to know if it’s just going to be a fund - and therefore not that different from what the Carbon Trust does, handing out grants - or a fully fledged bank.

“We’d like it to be a very high-powered, radical bank that is able to give government underwriting to projects that otherwise wouldn’t get off the ground,” he said. 骻

Industry experts are unanimous in their view that there will be little in the way of new capital expenditure for social and economic infrastructure in the forthcoming Budget.

“There’s an obsession with High Speed 2, but that spend is years away. I don’t see cash for anything new,” commented Mark Elsey, infrastructure head at the law firm Ashurst.

However, Graham Kean, head of public sector at EC Harris, thought that since the government will be looking to the private sector to drive recovery, it may take measures to increase the availability of bank lending.

Simon Rawlinson, partner at EC Harris, pointed out that the likelihood that public sector net debt will come in about £10bn less than the £149bn predicted by the Office of Budgetary Responsibility last year “gives Osborne some options.”

On tax, Osborne has already made clear his plans to reduce corporation tax by a penny each year until 2014, with the expectation it will reduce to 27% next week.

There are rumours that plans from HM Revenue and Customs consulted on under the Labour government to crack down on “false self-employment” in the construction industry will be finally introduced. The HMRC estimates that 300,000 construction workers, many of whom work in the housebuilding sector, register themselves as independent businesses in order to avoid tax and is looking to close the loophole.

The major concern in infrastructure circles, beyond the expected detailed information about the Green Investment Bank, is whether the government will take further action to limit PFI schemes.

Alex Jan, associate director with Arup, expects a “conservative and prudent” Budget with a “further retreat from PFIs.” In October Osborne told departments PFI spending will in future be taken from departmental budgets for the first time.

Jan said: “George Osborne doesn’t appear to be a fan of PFIs. However, constraints on local authorities preventing them from keeping locally raised tax will most likely be relaxed, which could mean more funds for infrastructure.”

Alasdair Reisner, head of public affairs at CECA, called for the government to find new ways of encouraging private sector involvement through new models, if PFI continues to be downgraded. He said: “In this Budget we’re hopeful that existing models will be developed further to attract the private sector.”

Reisner also urged the government to “confirm its commitment to Infrastructure UK in the Budget.” The Treasury unit was created last year with a remit of securing long-term private sector investment in a £400bn pipeline of civils work.

Tom Foulkes, director general with the Institution of Civil Engineers, said he was confident energy security would be “top of the list,” and expected action to ensure the delivery of new electricity generation capacity. He said: “I believe this government gets it. There’s plenty of evidence to suggest they do.”

Contractors’ lobby groups have gone beyond hoping for much increased investment in general construction - the spending review put paid to that - and are focusing their calls on getting the best possible visibility of the spending that does remain. Top of this list is to get publication of the long-delayed James review into school spending, which rumours suggest is currently earmarked to arrive just after the Budget. Stephen Ratcliffe, director of the UK Contractors Group, says: “Everyone to a man has been calling for visibility on the forward lines of investment. The only place we have this is the Highways Agency, currently.”

There are also calls for continued reform of public sector procurement, as well as for the government to make clear its intentions around reform of PFI.

For developers and housebuilders the key remains getting to a situation where the banks are forced to increase mortgage lending, which fell to a two-year low this week. The Home Builders’ Federation is also calling for the reintroduction of government-funded HomeBuy Direct scheme subsidising new home sales, the reform of stamp duty, and promises to increase the supply of public sector development land.