After 19 years of protracted disputes, the City of London has finally arrived at the historic Spitalfields market, in the form of a sleek Foster and Partners office block. Building assesses the latest addition to this famously varied quarter of east London

Even before 1986’s Big Bang, or the deregulation of the stock exchange, the City of London was bursting at the seams. Starting from the Broadgate development of the 1990s, gleaming office megastructures have vaulted eastwards over Bishopsgate and advanced towards the former Spitalfields vegetable market.

Finally they have arrived. A crisp and shiny 11-storey office building now stands virtually nose to nose with the wide low red-brick Wrenaissance market building. Indeed, the newer half of the market hall had to be demolished to make way for it.

As the culmination of the 19-year-long development of the Spitalfields area, the £285m Bishops Square development encapsulates the City’s invasion of the East End. The office block – all 102,000 m2 of it – is a factory for some 4000 City lawyers working for Allen & Overy. Its sharp, rectilinear forms and clear-glazed curtain walling, as designed by Foster and Partners, exude the hyper-efficiency of a world financial centre.

The intrusion of the world of high finance onto the historic market place is also a reminder of the evolving cultural mix that has always characterised this part of London. In the market building, the wholesale vegetable traders for whom it was originally built in 1883 have given way to a buzzing mix of stallholders selling homemade and occidental bric-a-brac and an exotic assortment of takeaways. Directly beyond the market building rises the arresting stone steeple of Hawksmoor’s Christchurch, which was built three centuries ago as a banner of the Church of England against the assortment of non-Establishment faiths congregating in the area. And one block beyond that runs Brick Lane, teeming with Indian restaurants and the epicentre of Banglatown, named in recognition of Spitalfields’ latest wave of immigrants, who followed in the footsteps of the Russian Jews of the late 19th century and the French Huguenots of the late 17th century.

The interlinked pair of old and new buildings fully expresses the clash of opposites in economic might, industrial activity, culture and ethnic origin that come face to face around them. Despite loud and lengthy protests by Spitalfields Market Under Threat (SMUT), it is the City and its high-earning acolytes, as catered for by the giant property developer Hammerson, that have gained the upper hand. And although the stallholders remain in the retained half of the market building, they face rising rents as the tide of City prices swells eastward.

Parallels with Covent Garden can be drawn. London’s other wholesale fruit and veg market was lovingly restored by the former Greater London Council in the 1970s, and its wholesale traders replaced by tourist traders. Architectural conservation then spread throughout the Covent Garden area.

The big difference at Spitalfields is that the invading industry here is big business – and big business demands big modern buildings for its head offices. Conversions of old rag-trade sweatshops just won’t do. On top of that, the market building belongs to the Corporation of London, which unlike the former Greater London Council, is more interested in maintaining London’s status as a financial centre than in providing leisure activities for its residents. Admittedly, Spitalfields does have its conservation area and listed buildings, which included just the older half of the market building, but anything beyond these is deemed fair game for redevelopment. Indeed, redevelopment is actively encouraged by Tower Hamlets council, within whose boundaries the site lies, for the substantial boost in rates that large city office blocks offer.

It’s not just for the lawyers

That said, the Bishops Square redevelopment does come with a rich mix of civic, social, leisure and shopping treats for general public consumption. Of these treats, the most accessible is the square itself, a narrow public piazza that occupies part of the former vegetable wholesalers’ lorry park. Just like Broadgate’s three squares, Bishops Square is a welcome new public space in the congested East End. The other prized commodity the square contributes to the area is greenery. Far from including a municipal scattering of bushes in concrete pots, the square is largely taken up with deliciously lush ornamental gardens in raised granite planters and shaded by an exotic mix of mature trees.

At one end of the piazza, the gardens give way to a wide courtyard paved in granite and limestone slabs and graced by a tented canopy over timber benches. Even before the builders left, office workers, tourists and other passers-by moved in and took over the shaded benches as if they were their natural home. The paved space next to the canopy is conceived as an informal arena for performances and exhibitions.

A more unusual attraction of the piazza is the lower stone and flint walls of a medieval charnel house, which was unearthed during six years of excavations. Lying one storey below today’s ground level, the medieval remains can be viewed from a tiny granite courtyard sunk into the paving. This sunken courtyard is turning out to be the perfect sanctuary secluded from all the hustle and bustle of the East End.

Shops, cafes and restaurants are the other main ingredients of the mixed-use development and, as the 21 retail units amount to 4000 m2 in area, they occupy most of the ground floor. The original wholesalers’ premises along one side of the market hall have been conserved as a row of four substantial semi-detached retail pavilions with red-brick upper floors. At the end of the row, overlooking the canopied benches, a cafe pavilion has been built to the same size but with modern louvres on the upper floors in a red-brick colour to match the brick neighbours. More shops have been included on three of the four sides of the office block.

There’s housing too: seven flats above the shops in the retail pavilions. A further 14 dwellings have been built on a side street around the corner.

As well as Bishops Square, three other pedestrianised public spaces wrap themselves around the office building. The first is an alleyway with a glazed roof running between the office and retail pavilion. The second is the original street along the opposite side of the building, which has been closed to traffic. And between them runs a rectangular courtyard, also covered by a glazed roof.

As for the office building itself, this is not one of Foster’s latter-day curvaceous icons, such as the Swiss Re tower or City Hall. Rather, it is a series of four narrow elongated slab blocks that step up from five to 11 storeys. With flat, flush facades and roofs, they are vintage Foster – plain, boxy, slick and verging on the utilitarian, though with faultless detailing.

The modesty of the building is actually its saving grace. By not drawing attention to itself, more prominence is given to the civic spaces, the greenery, the market building and the retail pavilions that skirt around it. The configuration of four narrow slab blocks also conceals the true size of the building, which measures a full 100 m × 100 m in plan and is 65% larger in capacity than Foster and Partners’ 41-storey Swiss Re Tower.

The configuration of narrow slab blocks was also conceived to suit the lawyers who will occupy them. Each slab is just 18 m wide, allowing both open plan and the cellular offices that most lawyers still prefer. Wide strips of office space link the parallel slab blocks and are largely given over to service cores and storage. And rising up in the centre of these linking strips are three narrow atriums.

The weakness of the office configuration is that the atriums are little more than light wells and give the heart of the deep-plan building a sense of claustrophobia. For staff stationed here, the only relief comes courtesy of the perimeter walls, which are fully glazed and give distant glimpses to the outer world.

They can also escape to three sizeable gardens, which are for the exclusive use of the occupants. As the surrounding ground-level spaces are given over to public use, the lawyers’ gardens have all been consigned to the roofs of the three lower blocks. These are all generous in area, richly planted, equipped for barbecue parties and command wide, liberating vistas over east London.

Looking at the mixed-use complex as a whole, all its components are easy to read for what they are and fit together neatly in a four-square arrangement. A slightly jarring note comes from a slight difference in angle between the retained brick pavilions and the new office slabs rising up behind them. This geometric disparity occurs because the office building is aligned to the other side of the market building, and the former is four-square in plan whereas the latter is not. The subtle cause of this disparity will no doubt be lost on bystanders, but it does come with an unexpected bonus: the alleyway between the office building and retail pavilions has ended up wedge-shaped and focused on Hawksmoor’s spire.

The last of the new complex’s mix of uses will take place in the glass-topped courtyard. This space will flow without obstruction into the retained market building and is intended as its overspill space. In this way, the new commercial development gives back part of the market space it usurped when it demolished half of the original building.

If Bishops Square spliced to the old market building is a hybrid of City and East End, of new-build and conservation, perhaps the best way of looking at it is not as a compromise between the corporate City and the gritty East End, but as a vibrant, multifaceted and clearly stated transition between the two. More than that, it shows how a very large office block can dovetail neatly into a range of other new and existing uses that serve the public and bring 24-hour life to the area. 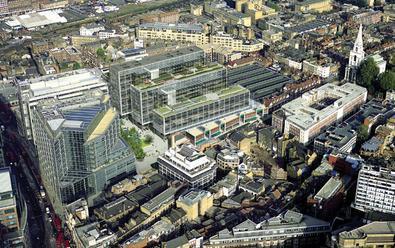 Architecture The 102,000 m2 office is arranged in four parallel strips, each 18 m wide and stepping in height from five storeys up to nine then to 11, and then down to seven storeys. The configuration lessens the visual impact of the building and allows interiors to be laid out as either open plan or cellular offices.

Structure A steel frame was selected because of its speed of construction. The 18 m wide office strips are supported in perimeter columns and clear-span beams to give flexible interiors. The beams all have a standard 650 mm depth, with the thickness of steel varied to cope with differing loads and the web pierced by large circular holes to take services runs.

Services Although the air-conditioned building is one of the first to comply with the upgraded Part L, it relies largely on the deep plan for environmental stability. Window walls on three sides are triple-glazed, with heat recovered from ventilated cavities in winter. Photovoltaic cells on the top roof should generate more than 1.5% of annual electricity usage.

Cost control Construction cost £168m, of which £155m was spent on the office building, £4m on the conversion of the market offices to retail and £9m on external works. The unit construction cost of the office was £1520/m2, some 10% below the benchmark for central London offices. Savings were made out of the deep-plan form and by restricting triple-glazing to the building’s three sunny sides.

Construction The mixed-use project was let to Sir Robert McAlpine on a 117-week design-and-build contract with a guaranteed maximum price. Since speed was of the essence, no significant changes were made to the consultants' design. As required by the client, some 10% of site labour was sourced locally. Skilled East European tradesmen were hired to install drylining and lay external paving.