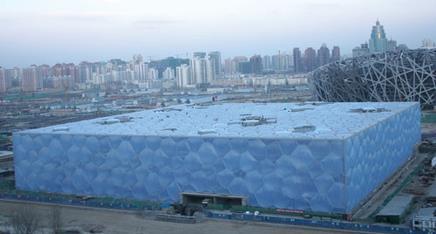 ETFE specialist Vector Foiltec’s involvement in building an iconic aquatic centre for the 2008 Beijing Olympics has called for the relocation of its fabrication operation to China, as managing director Ben Morris explains.

The name Vector Foiltec has become synonymous with the fabrication and installation of ETFE cushions for roofs and enclosures, its most famous project being Sir Nicholas Grimshaw’s Eden Centre in Cornwall. That was, until the Watercube came along.

Three times the size of the Eden Project, the 100,000m2 Arup-engineered swimming centre in Beijing will be a flagship building for the 2008 Beijing Olympics and is scheduled to be completed in June.

Company director Ben Morris, who developed the ETFE technology and founded the firm in 1981, employs a workforce of 300 around the world. His company had a turnover last year of £40.4m. We asked him about progress on the $20m (£10.3m) Watercube contract.

The real challenge for us was moving our whole fabrication plant to China. To do it, we had to hook up with Yuanda, the largest cladding firm in China, and train its employees in fabrication and installation. Our team is carrying out a quality assurance role and is supervising labour.

This is no mean feat. The swimming centre is the largest ETFE structure ever built. The structure is based on the slicing of a soap-bubble matrix that results in a light but complex steel structure. We have about 30 standard and 300 non-standard ETFE cushions making up the cladding.

The construction culture in China is completely different. If you want to cut costs in the UK you reduce labour, but in China labour is virtually free, so the cost driver becomes the material itself.

It took about two months to set up our factory up in China, where, in partnership with Yuanda, it is technically a wholly owned foreign entity. That said, we brought all our machinery over from Europe and we have built our own welding machines to produce the 100,000m2 of cushion we will need to cover the building.

There were a lot of construction issues to resolve. The cavity between the inner and outer walls is 5m, while the distance from the outside face of the roof to the inside surface is 10m. The tolerance for the cushions is about 3mm and, for the steel structure, anything up to 150mm. This forced us to develop a loose-fit interface: a special aluminium extrusion that bolts on to the steel structure via an EPDM spacer to prevent bimetallic corrosion.

The bracket detail has worked and the quality of workmanship has been excellent. The outer skin is complete and we are beginning to install the inner one.

One of the biggest design challenges for the cladding was how to deal with the inevitable snow loads during the Chinese winter. We opted for an intelligent inflation system coupled up to a building management system. The system has sensors that can pick up load increases on the facade and reacts by pumping air into the zones affected and increasing the pressure locally to prevent ponding of the facade. It's a simple but crucial detail.