Why are there fewer apprentices in construction despite increased government spending on apprenticeships? Building investigates 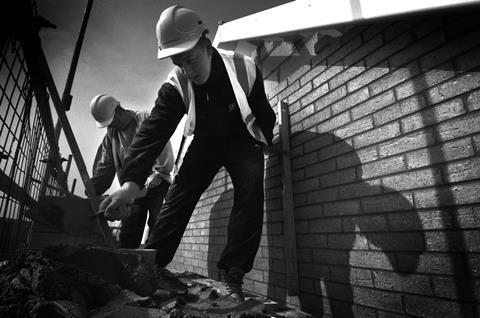 Apprenticeships are right at the heart of the kind of economy we want to build.” So said prime minister David Cameron, trumpeting increased government investment during Apprenticeships Week earlier this year. For most construction companies, which have long relied on apprenticeships as the core of the UK’s trade skills, he couldn’t be more right. “We are investing in apprenticeships because we know they work,” Cameron said. “They are good for people who want to get ahead, good for business and good for the country.”

Superficially it looks like the government is succeeding. In the coalition’s first year in office 457,000 people started apprenticeship courses, an increase of two-thirds on the previous year, and more than double the average number starting them in the last decade. And all the indications are that in 2011/12 year the number will be even higher. Skills minister John Hayes says: “The government is on track to deliver the biggest and best apprenticeships programme our country has ever seen.”

But those in the construction industry might beg to differ. According to ConstructionSkills, the industry’s training board, the number of construction apprentices is now running at about half the level it was four years ago - from more than 14,000 a year to less than 8,000. And it looks like the figures could get even worse. Mark Farrar, chief executive of the body, argues that the drift could lead the industry into a significant skills shortage if and when the economy picks up. The fact that construction apprenticeships have fallen so sharply at a time when the government is upping its investment to £1.5bn a year raises serious questions both about how this could be allowed to happen, and why other industries have seemingly done so much better. So just how damaging might this be to the industry, and what can be done to turn the situation around?

There just isn’t the work

After reaching a peak in 2008/09, the number of construction apprenticeships has declined for the past two years, at just below 8,000 starts a year, with Farrar predicting another small fall in 2012/13. While the catastrophic declines which left 3,705 apprentices out of work when the housing market collapsed in 2008 have been stabilised, it is the lack of economic growth which is making construction employers so reluctant to take new apprentices on.

This is because while the government pays all or part of the training costs of an apprentice (depending on their age), and employers can claim back up to a further £10,200 of costs from ConstructionSkills, taking on an apprentice is still a commitment to employing someone for two to three years. The government estimates this leaves employers with an average wage commitment over three years of £26,074. Diane Johnson, boss of M&E contractor Eric Johnson of Northwich, and skills ambassador at the Electrical Contractors’ Association, says: “The biggest problem is that contractors are just so unsure about the volume of work and how long it will last.”

Of the 32 biggest contractors in the industry there are only 12 that train apprentices. Do they not have a moral responsibility for the skills of the future?

Johnson also has strong views about why other sectors of the economy seem to be, relatively, performing so well in comparison to construction: they’re not really apprenticeships, she says. Government figures show that growth in the number of apprenticeships has been highest in “new” areas such as health, retail, business administration and education. While numbers doubled in a few of these areas between 2009/10 and 2010/11, growth in all building, civil engineering and other built environment apprenticeships was just 11% at the same point. Furthermore, an independent evaluation conducted for the business department by the Institute for Employment Research and consultant IFF found that not only were apprenticeships in other sectors significantly shorter courses than those in construction and engineering, the quality of teaching was worse, and the number of apprenticeships which created new jobs created significantly fewer. Johnson says: “The government is conning young people by saying they’ve got 500,000 apprentices. They’re not really apprenticeships, they’re dumbing down. What you’re talking about [in other sectors] is what we used to call work experience. Don’t tell them it’s an apprenticeship.”

The National Audit Office earlier this year found that a fifth of apprenticeships took less than six months, with this proportion highest in the fastest growing areas, like IT and telecoms, where two-thirds are quick-fire courses. ConstructionSkills, on the other hand, has worked hard to retain the depth and quality of the construction versions. Brian Berry, chief executive of the Federation of Master Builders, says: “We shouldn’t be labelling all apprenticeships as being the same. Saying McDonald’s’ training for existing staff is an apprenticeship - it’s not comparing like with like.”

So what does the reduction mean for construction? According to ConstructionSkills’ Farrar, the problems will come when the industry starts to recover from recession. “If young people aren’t in place, then at that point we could have a problem. At 50% of where we were three years ago, the number of apprentices has to have an effect.” Ideally, he says, we’d be training about four times the current number.

Others put it more starkly. Berry says the risk is of a return to the nineties, where a failure to train staff in the recession led to a decade of skills shortages, for which the importing of hundreds and thousands of eastern European migrants was a temporary solution. “We’re in danger of repeating the nineties. But who’s going to fill the gap this time? It really isn’t clear.”
Johnson, who sees an ageing workforce of electrical engineers, likens the situation to a ticking time bomb. “The average age of an electrician is 47. In another 10 years time, where are the people that are going to fill those positions? You look at what has happened in the nuclear industry.”

What’s to be done?

A number of approaches are being taken to tackle this looming crisis. The business department is offering grants of up to £1,500 for SMEs taking on apprentices for the first time, and has commissioned entrepreneur and former Dragons’ Den “dragon” Doug Richard to lead a review of government apprenticeships policy. ConstructionSkills has upped its grant to employers taking on apprentices, and is working to set up pilots for joint ventures between contractors and councils which can share the risk of work drying up before a three-year apprenticeship has been completed. In addition it is working with the Cross-Industry Construction Apprenticeships Task Force (CCATF) on shorter-term training packages that can get young people experience of working for contractors, potentially leading to full training places in future. But so far the impact of these measures is marginal.

Public procurement is seen as one of the real areas where government could do more to encourage apprenticeships. The coalition has endorsed a voluntary toolkit created by the last government that suggests one apprentice is employed for every £1m of government money spent on construction, but the approach is not mandated.

At the same time its commitment to reducing regulatory burdens on businesses has put it in a tricky position, so where it is giving on one hand it is taking away with the other. For example, under the previous government’s housing stimulus package, developers and contractors had to say how many apprentices they would employ when bidding for government cash, and allow the Homes and Communities Agency to monitor that. In opposition, the current housing minister Grant Shapps branded those rules “ridiculous and counterproductive” and duly scrapped any mandatory requirement on the new government housing programme.

Many feel much more can be done in this area. Geoff Lister, chair of the Cross-Industry Construction Apprenticeship Task Force (CCATF), says that the 457 apprentices employed by the Olympics, for example, represented a “huge opportunity lost”. “They should have trained 2,000 apprentices,” he says. He calls for main contractors to do more, with 65% of all apprenticeships carried out by firms with less than 10 employees. “Of the 32 biggest contractors in the industry,” he says, “there are only 12 that train apprentices. Do they not have a moral responsibility for the skills of the future?”

Meanwhile, the government is being urged from all sides to stimulate areas of construction, such as housebuilding, that generate the most jobs and training opportunities. With repair and maintenance work on homes creating 32 jobs for every £1m spent, compared with just 15 for every £1m spent on infrastructure, the government may need to look again at where it is choosing to spend its limited cash.