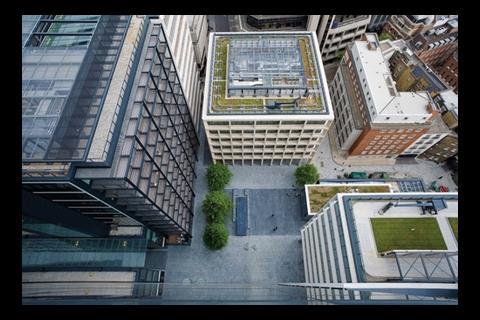 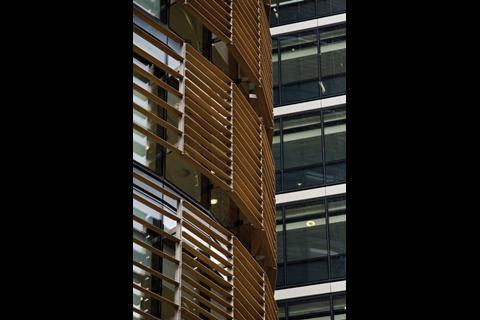 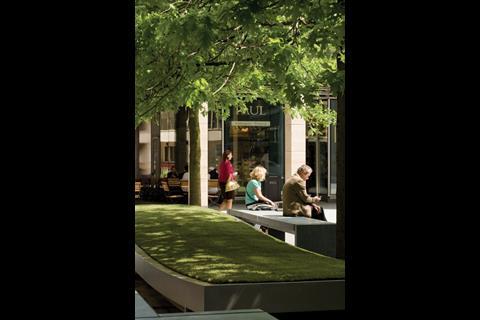 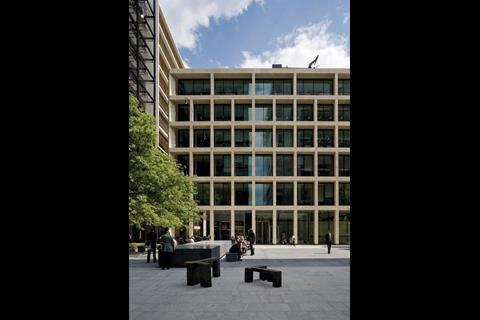 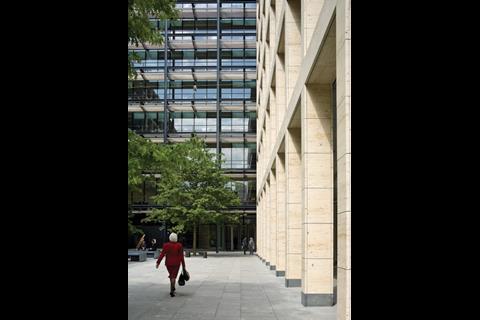 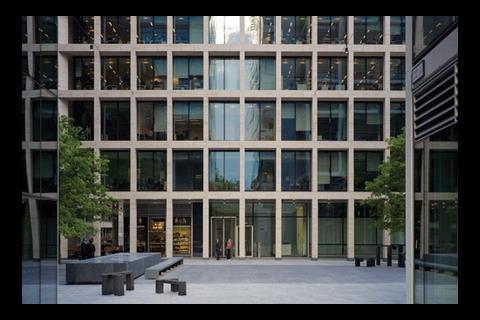 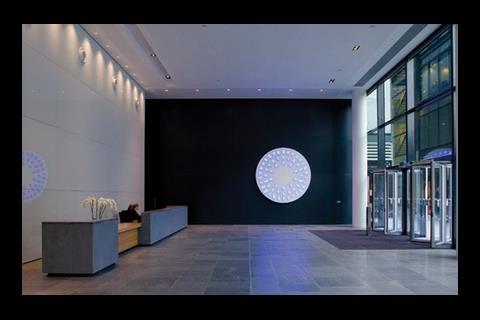 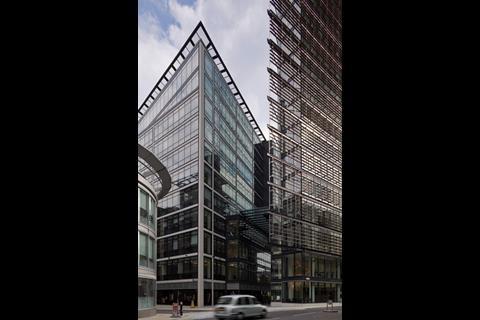 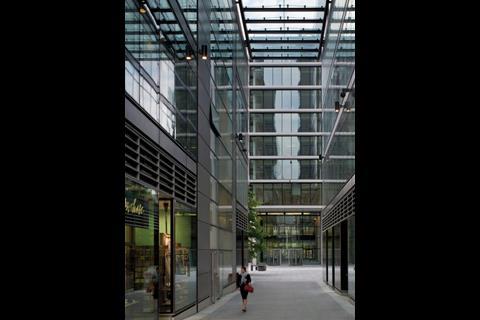 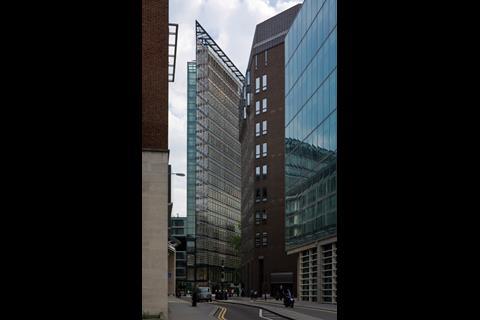 It is reached through narrow medieval-style passageways, but could be a blueprint for a sustainable 21st-century City of London

You would think that a million square feet of shiny office development would stand out, even in central London. But locating Land Securities’ latest project is surprisingly difficult. If you approach it from the east, off Farringdon Street on the western edge of the City of London, you stumble onto it almost by chance. Only clean, shiny new facades indicate its presence.

A narrow passageway between two of these facades leads to a small, pleasant square, some trees and a water feature. It’s surrounded by five buildings of varying size, and when you look up you soon realise that the buildings are much higher than the size of the square would suggest. This is New Street Square, Land Securities’ latest foray into the brave new world of the sustainable office development. It is also Bennetts Associates’ biggest scheme to date.

The practice is known for its cutting-edge, low-environmental impact schemes, such as Wessex Water’s low-energy office and Brighton’s Jubilee Library. Now it has moved into the premier league of big-time, city-centre office development. The reason is that Land Securities wanted an exemplar for sustainable development, which doesn’t sound so special now, but certainly was back in 2002 when sustainability was a fringe interest of the dedicated few.

Its aim was to develop a scheme with a life of at least 60 years. To hit this target the offices needed to be genuinely sustainable from a social and economic perspective. In short, it had to be a place that companies would want to rent and where people would want to work – and it had to be affordable to run in 2068, which is quite a tall order. So how has Land Securities and its team got on?

The little square is a big part of the answer to how sustainable this development is. First, it’s an important, public social space. There are restaurants and cafes at ground level in the square, with the idea that workers have a social space in which to gather and the place doesn’t die after 6pm. Second, by surrounding the square with separate buildings it creates flexible space, which should prove more attractive to companies over the long term. The square also has a third function – it provides a link to the surrounding streets, which makes the development feel like part of the area rather than imposed on it.

Land Securities went to a lot of trouble and expense to create this particular example. It got planning permission to build one big RHWL-designed groundscraper on the site – and then ripped up the plans.

Instead, the developer invited several architects to come up with ideas and was most impressed by Bennetts Associates’ proposals. “Employing [Bennetts’ director] Rab Bennetts was a big risk for us as he is a very small architect,” says Gerry Manning, Land Securities’ project manager at the time. “But we liked his ideas – he was in tune with what we were trying to do.”

The idea was to ditch the groundscraper in favour of five smaller buildings arranged around a square. “It went from one big floorplate to five buildings,” says project director David Laing. “It was a brave thing for Land Securities to do as it must have spent a lot of money on planning permission.” Laing is at pains to point out that this isn’t just any old square. “It goes back to the idea of a medieval square,” he explains. “With a medieval square you slip in from the side; you see a tree or something and are drawn in. That is how New Street Square started to evolve.”

This idea provides a link with the conservation area to the north of the development, which features similar, intimate squares. The New Street Square and its surrounding buildings are arranged asymmetrically, with the four entrances into the square determined by the routes used by commuters from Chancery Lane to Fleet Street, and Farringdon Road to Grays Inn Road. Some of these entrances are just 6m wide, to reinforce the medieval concept. “People commented that the entrances were too narrow, but we said we wanted them like that,” says Laing.

These narrow entrances are also part of the flexibility strategy. Smaller buildings may suit most people, but what happens if a tenant – say, a City trading firm – wants a very big floorplate? The first and second floors have deeper 3.2m floor-to-ceiling heights to accommodate dealing room services. The floor heights of each building also correspond exactly with its neighbours, which means floors can be extended over the passageway to form floorplates bigger than the individual buildings.

Externally the building scale and facade treatments are varied to help give variety and to mitigate the impression of a single mega-development. The buildings have been arranged to get as much light as possible into the square. “It was very important, especially in the afternoon, even in winter,” says Bennetts. So Land Securities’ management

office is just two storeys high to allow light from the south into the square. It is crisply finished in stainless steel and glass. On the west side, a 20-storey, glass-fronted building towers over its surroundings and the shade cast by this falls on the road behind. On the east side is a limestone-fronted, low-rise building with set-back glazing. Laing says this helps tie the development into its locality, as buildings to the east feature predominantly stone cladding. “We made it the same height as an apartment block on the corner and the cladding language is the same – it plugs the development into the conservation area,” he says.

The facade treatment also helps tick the box for environmental sustainability. The south-facing facades are clad entirely with brises-soleil to cut solar gain; those facing west get the same treatment, apart from where they are shaded by other buildings.

It doesn’t need any maintenance, has a theoretical 60-year
lifespan, is carbon-neutral and weathers to a silver patina, which is good for the look of the building

On the east side the solar shading is limited to a glass frit and spandrel panels are used to create solid areas.

Having said that, the air-conditioning strategy is radical for what is a spec office development and forms part of the futureproofing strategy.

Unusually, tenants have complete freedom to specify their own air-conditioning solution. They can either go for a conventional suspended ceiling with four pipe fan coils or radiant panels. Alternatively, they can opt for an exposed structure with either active or chilled beams. Laing says the concrete soffits are good quality, plus the suspended ceiling hangars have been designed to minimise damage if removed.

Despite this choice, all the tenants have opted for the most energy-intensive solution – four pipe fan coils.

“It’s still very much agent-driven; they are still actively encouraging the tenants to go for fan coils as it gives them the temperatures they are asking for,” says Laing. “Personally, I think it’s over the top.”

He adds that future tenants could take out the suspended ceilings and go for the more efficient chilled beams as attitudes change and IT equipment becomes more efficient and produces less heat. The buildings do make a nod towards natural ventilation as each cladding panel includes a mechanically operated, opening light at ceiling level. “Without a suspended ceiling you could open these at night and introduce night purging to cool the first few metres of slab inside the building,” says Laing.

“It doesn’t need any maintenance, has a theoretical 60-year life, is almost carbon-neutral and weathers to a silver patina, which is good for the look of the building,” says Laing. He adds that Land Securities was initially sceptical but was convinced by this approach.

However, the pressures of a fast-track build programme has limited what could be done on the materials front. So does all this add up to a blueprint for 21st-century sustainable development? The answer is, it’s a decent stab at it; the buildings are well mannered, offer visual variety and fit well into their environment. The square is a great success and future flexibility has been considered carefully. These elements should make a big difference to how long the buildings remain appealing.

On the environmental front, old attitudes clearly die hard as the letting agents have successfully pressed for the most energy-hungry solution, and it may be many years before the buildings are genuinely low energy.

Some effort has gone into material selection, but this is still a high-embodied energy, concrete and glass development delivered with the programme as its top priority. So the signs are very encouraging, but we will have to wait 60 years to know for sure.

Balancing sustainability to a fast-track programme

New Street Square may be a sustainability exemplar for Land Securities, but it still wanted the building delivered speedily – in just 100 weeks.

This inevitably led to some compromises when it came to selecting materials. On the positive side, Bennetts Associates cajoled Land Securities away from a steel frame, which is the default fast-track office construction method. Instead, the building has a concrete frame with post-tensioned floor slabs. This was important, as the concrete added thermal mass to the building.

“We weren’t keen on post-tensioned slabs, but Rab Bennetts convinced us it would give us more flexible space and make minimal use of materials,” says Gerry Manning, Land Securities’ project manager at the time.

Cement replacements have been used in the basement to reduce the embodied energy of the structure. Between 30% and 40% of the cement has been replaced by ground granulated blast furnace slag, which Richard Lamb, a regional director at structural engineer Pell Frischmann, says is good practice.

But the use of cement substitutes stopped above ground, as the slow curing time was deemed too risky. “We liked the idea of cement replacements but the turnaround was too slow for the slip-formed cores and the post-tensioned slabs,” says Lamb. “There’s enough risk on projects without introducing something of your own making.”

He adds the contractor, Sir Robert McAlpine, did not want to risk invoking penalty clauses if the contract overran.
Recycled aggregates were also dismissed owing to programme constraints.

“There were certain environment-friendly aggregates we could have used in the concrete, but it needed more research,” says Manning.

Lamb adds that he did consider using stent, a by-product of China clay production, but this was ruled out. “At the time the infrastructure wasn’t set up to supply such large volumes,” says Lamb. “There was only one source and it was a long way away. We were disappointed we couldn’t use it.” He adds that the situation has improved now there is more guidance on using recyled aggregates and the supply situation is better.