The shape of Scunthorpe

Scunthorpe leisure centre rises from the landscape as a series of interlinked domes, more in number than the Eden Project. We find out how you specify roofing for such a complex project, where nearly every element is unique 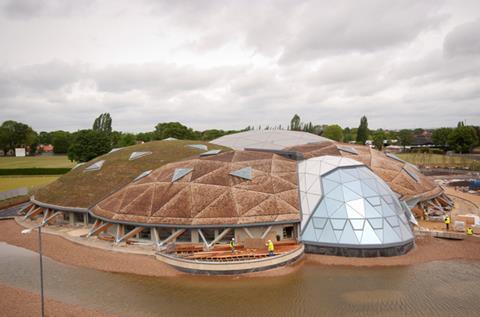 The residents of Scunthorpe have now got their own, distinctive take on Cornwall’s Eden Project. Like Eden this structure comprises a series of interlinked domes. But that is where the similarity ends. Eden has three domes whereas Scunthorpe trumps it with five. Eden is made from synthetic, translucent ETFE to help the plants contained within the domes flourish. In Scunthorpe the domes are the natural element with sedum and timber cladding, which, according to architect Ron Wallwork of S&P Architects, was entirely deliberate. “The design is similar to a lawn that starts bubbling up from underneath so it very much becomes part of the landscape,” he explains.

The reason Scunthorpe leisure centre features such a cornucopia of roofing materials is to define the function of each part of the building. The entrance dome is clad with aluminium and glass whereas the two domes behind this use western red cedar shingles and house a gym and learner swimming pool. At the back of the building the sedum-clad dome covers the competition pool and the dome next to this covers the sports hall. Unfortunately, there wasn’t enough money in the budget to clad this in sedum too so the single-ply membrane common to all the domes is left on view.

According to Jonathan Roynon, associate director of structural engineer, Buro Happold, the complexity of the structure is due to the interlinked domes and their irregular shape. Getting the domes to work structurally and look good was a major challenge. “An awful lot of work went into finding those shapes and a lot of mathematical form finding was used to give the grid a nice tidy surface,” he explains. This means virtually every single element in the roof is unique but the use of computer-aided manufacturing techniques means they can be made cheaply and easily.

The structure of the domes is made up using a triangular grid; this comprises glulam sections joined at the intersections with cast steel connectors. Roynon says this is the first time a multi-domed building has had its structure made from timber. Contractor Bowmer & Kirkland was heavily involved in working up the design. “The roof in itself was a major exercise in collaboration with the design and specialist contractor teams turning it into a concept that could be built,” explains Mike Atkinson, project manager for Bowmer & Kirkland.

Virtually every single element in the roof is unique. But they can be made cheaply and easily using computer-aided manufacturing techniques

Bowmer & Kirkland’s timber structures division developed the connection node joining the glulam sections. Each glulam section has its ends cut to a unique angle to form the shape of the dome. The primary triangular structure features a secondary structure created by using plate connections to fix smaller glulam sections to the sides of it. This has the effect of dividing each large triangle up into nine small ones. “This was more efficient and kept the costs and complexity down,” explains Atkinson.

Bowmer & Kirkland’s other contribution to the design was devising a cassette system to fit over the roof structure. The cassettes simply drop between the primary structural elements and are supported by the secondary elements just below this. Each cassette consists of a softwood frame with timber slats to form the finished soffit inside the building. These slats are fixed over an acoustic-deadening material to improve sound quality. The cassette frame is topped with waterproof plywood and capped by a waterproof membrane. A waterproof tape was applied over the joints to create a watertight structure so work could continue below before the roofing finishes were completed. 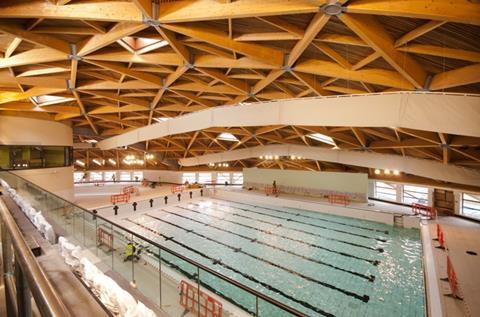 The roof structure is visible from inside the building. The primary structure is joined using cast steel connectors with the second elements fitted inside this using plate connections. The secondary structure supports the bespoke roof cassettes

The building uses two steel spine beams for additional structural rigidity as well as a steel-framed mezzanine inside the building, which was was erected first. Work started on the timber structure at the front of the building with the team working towards the back. The leading edge of the roof was propped up using temporary supports that were moved as the structure progressed.

The single-ply membrane was made by Renolit and features a special batten detail to enable the timber shingles to be fixed to the roof. An aluminium bar was welded into the membrane so wooden battens could be screwed into it. This enabled timber shingles to be conventionally nailed to the wooden battens. A gap was left in the finished shingles to express the primary roof structure. As this is facetted, it also deals with the angle between each triangular roofing element. The problem of water penetration between the gaps is not an issue as the shingles act as a rainscreen over the single-ply membrane.

Irrigation pipework followed by sedum was placed on the dome over the competition pool. Glazing units following the shape of the primary structure have been used for the entrance.

A swimming pool and gym won’t have the same draw as Eden’s three giant greenhouses but this distinctive new building should certainly put Scunthorpe on the map. 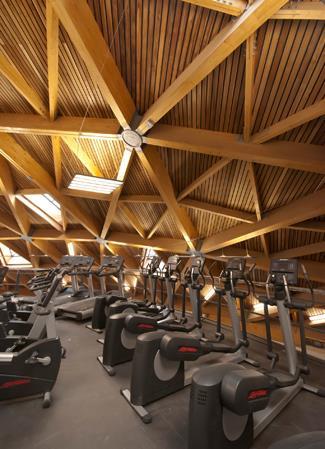