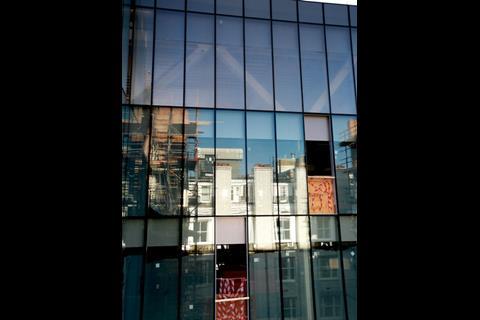 Eight floors are suspended from this big steel truss which will be clearly visible in the finished building. The truss was the key to creating large open spaces in a cramped building 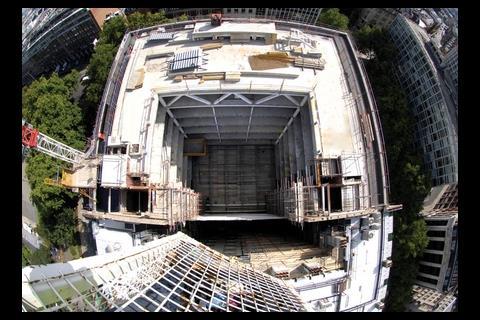 A bird’s eye view of the U-shaped building. A strip 8m wide next to the facade was retained. 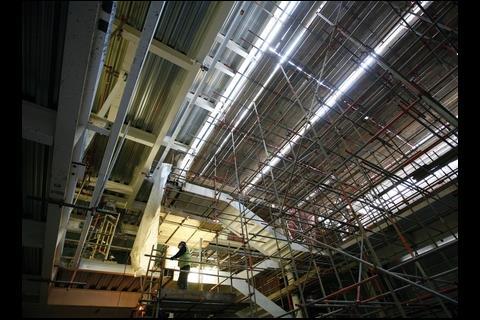 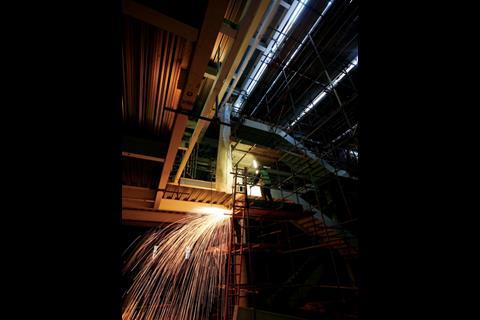 Dramatic finishing touches being made to the steel structure 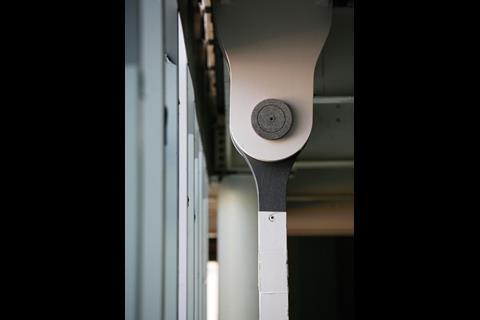 Suspension rods attached to the edge of the suspended floorplates 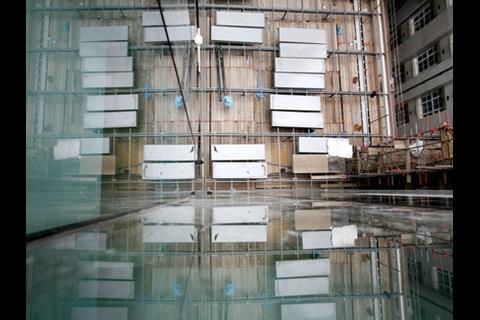 Looking down the glazed lightwell at the crash deck 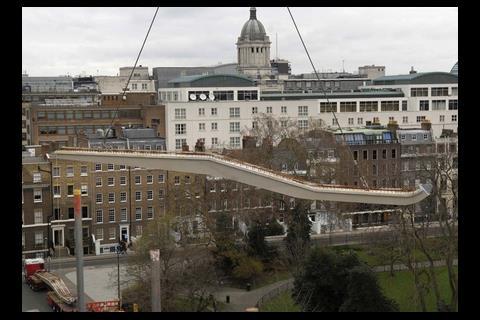 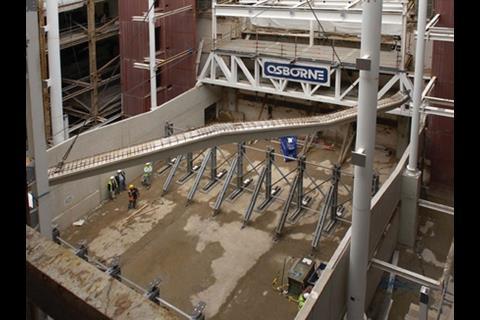 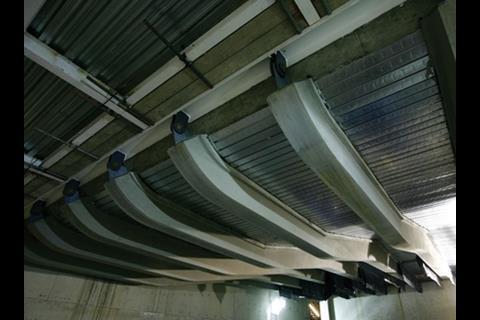 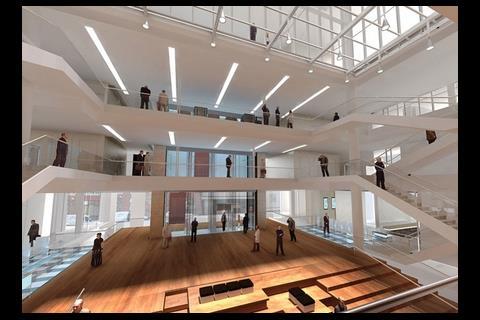 A visualisation of the completed ground floor. The aim of the work was to create large, well-lit spaces like this foyer on top of the lecture theatre

Imagine taking an elderly building full of small dusty rooms and turning it into attractive modern teaching spaces for a world famous university. Thomas Lane explains how the project team tackled the problem and passed with aplomb.

Turning a tired building designed for bowler-hatted clerical workers into fresh and bright facilities for the free and easy 21st-century student sounds like a challenge, but the London School of Economics has done precisely that.

Not before time. The school’s old Houghton Street premises was an extraordinarily overpopulated warren of corridors filled with students walking sideways to get by each other. As the school was set on recruiting even more of them, it desperately needed to find space to put in more lecture theatres and offices.

The problem was that its campus was just off the Kingsway in the heart of central London, and finding or creating a vacant plot there was impossible. So when the Public Guardianship Office at 24 Kingsway came onto the market, the LSE reached for its chequebook.

Once the purchase had been completed, the LSE got down to the business of converting it for its purposes – or rather Grimshaw, its architect, did.

What Grimshaw faced was a 1912 building that had had one careful owner for its entire life. It had been designed to hold records of who was who’s legal guardian, and it resembled a hive of cubicles fitted into a forest of steel columns that, in places, were just three metres apart. For Andrew

Milward-Bason, Grimshaw’s project leader, this was a nightmare. “The spatial brief,” he says, “was for four lecture theatres, including one with 400 seats, a number of classrooms and academic departmental space, plus, could we do something on the roof?”

“It was going to be hard to get classrooms and impossible to get lecture theatres in that structural grid, and you can imagine it would be difficult to fit open-plan offices around those columns.”

Yet structural engineer Alan Baxter & Associates came up with a neat, cost-effective solution that retained half the interior and gave LSE what it wanted. Delivering the structural gymnastics has been challenging for contractor Osborne, who’d never taken on a job of this size (see box). How did it get on?

The building’s facade had to be retained to keep the planners happy. “It was extremely unlikely we’d have got permission to demolish the building totally,” says Jim Gardiner, Alan Baxter & Associates’ partner in charge of the job. But Gardiner went one step further by coming up with a solution that kept half the interior as well as the facade.

An area extending 8m in from the U-shaped building facade (the building is at the end of a terrace) has been kept. “We concluded this was useable as it was in a good condition and there was no need to change the floor levels,” says Gardiner. “By keeping this bay we could significantly reduce the propping needed for the facade, which was more cost effective.” The building has a lightwell that butts onto the neighbouring building. An area extending 8m from this lightwell into the building has been demolished as it was in poor condition.

But how do you get a 400-seat lecture theatre, smaller teaching areas, as well as open-plan offices into a building where half the structure has been retained? The answer is careful reworking of the existing structure and clever space planning, mixed with neat structural design.

The cores and services were placed in areas where the columns were particularly dense in the retained structure with some columns selectively removed. The retained floorplates have been extended into the demolished area and the lightwell reinstated, albeit with a different shape and fully glazed to get more light into the building. A huge truss has been installed at the top of the building and used to suspend the eight new floorplates where these abut the atrium. This has allowed the creation of a column-free space in the lower ground floor where the 400 seat lecture theatre is located.

The challenge facing Osborne was the complexity of the job, coupled with the fact that one job needed to be finished before the next could start. First, the inner part of the building had to be demolished. Then two columns had to be removed on each side of the U and a section of four columns taken from the foot of the U by the lifts. Steelwork specialist Bourne Steel co-ordinated with demolition contractor McGee so it could insert transfer beams to support the area where the columns had been removed, as McGee worked down the building one floor at a time – a task Osborne’s senior project manager Kevin O’Brien describes as “very complex”.

This meant that only localised temporary works were needed, saving Osborne £250,000. A special frame had to be constructed to support the building in the lifts area while each column section was removed. O’Brien says this was very time consuming.

Where possible, work was done concurrently to save time. The original ground floor was 600mm higher than street level but Grimshaw wanted to lower it to make the building more visible and transparent to the public, and to take care of disability access requirements. The problem was, the original floor helped to brace the columns, so removing it would have required extensive temporary works.

Instead, the new floor structure was built underneath the existing floor. This solution had the additional benefit of protecting workers from the demolition being carried out above. Steelwork was craned down through the lightwell, eased underneath the old floor and positioned using blocks-and-tackle and chain lifts.

“It was a time consuming option but it was better to do it this way rather than using temporary propping,” says Gardiner.

Valuable time was saved by using steel company Corus’ Bi-Steel product. This is a prefabricated steel core system made from double-skinned steelwork. It is craned into position section by section, and the gap between the two steel skins is filled with concrete. Two of these were used, with installation taking three weeks rather than the 11 typical for conventional concrete cores. It did require the design to be finalised much earlier, but O’Brien is a convert.

“It was a great success,” he beams. “The labour and time saving was immense. The system is more expensive but we reckon the costs even out so it’s cost neutral.”

With the demolition and cores complete it was time for the most delicate operation of all. The large lecture theatre was to have a roof structure supported by eight, 18m precast concrete beams. These were specially shaped to create a ramp above the theatre to help students access the lecture theatre from above. Getting these in was crucial, as work could not start on the structural steelwork at height until they were in place.

One end of each beam is supported on a wall and the other is hung from a truss supported at its ends. With the walls and truss in place the beams could be craned in.

Careful planning for this operation was essential. The roads around the site had to be closed and Camden council was prepared to grant only 20 hours access over one weekend in March 2007. A 500-tonne mobile crane armed with a 49m-long jib was needed for the operation, and a 120-tonne crane was needed to erect that. The plant hire and road closures cost £26,000, so Osborne needed to get it right.

Things didn’t get off to a great start. A Royal College of Physicians demonstration was planned for the road where the lifting operation was taking place. Luckily Osborne had booked the road closures first so the march was diverted. Then it took ages to get the first beam in. It had to be craned over the building, down into the lecture theatre space, and one end dipped by 500mm to get it underneath the supporting truss.

“The first beam came off the back of the lorry at 9am on Saturday and we only got it into position at 1:30,” says Mark Makinson, a project manager with Osborne at the time. “Fortunately we got the hang of it and we managed to get seven beams in on the Saturday, which was lucky as by the time we got the last one in on the Sunday, the wind got up, which would have stopped work.”

The length of the beams meant they needed to be carefully propped as the weight of the wet concrete forming the slab over them would have caused unacceptable deflection. Once the high strength concrete was poured and cured, the props were removed. “It was a major milestone,” O’Brien says.

With the lecture theatre structure complete, the rest of the steel structure could continue at height. Two 600mm-diameter circular columns support the truss at roof level; these straddle the lecture theatre and two secondary columns support the stairs and landing. The big columns were extended up to roof level and the truss craned in. Suspension rods and edge beams for the floorplates were attached to the truss, and the new floorplates constructed.

With the structure complete, the nature of the job changed. “Now we’re in the fit-out phase, the job changes from sequential to mass production,” says O’Brien. “The challenge now is getting a massive amount of work done in a fairly short space of time while retaining the high quality architectural intent.”

How Osborne moved up a league

Back in March 2005, the £32m LSE conversion was the largest contract Osborne had ever taken on. Adrian Smith, its managing surveyor, says its strategy is now to go for bigger jobs. He says: “You can have the same amount of grief on a small job, which can make it less profitable. Most of the big players, such as Bovis Lend Lease, which were in the £20-50m range are now concentrating on even bigger projects, so we saw a gap in the market.” The strategy seems to have paid off as Osborne has just announced its most profitable year ever, with a 27% increase in pre-tax profit on a 7% increase in turnover. Smith adds the company still does small jobs to maintain relations with its suppliers.

The contract was a two-stage, lump-sum, design and build. Osborne was invited to pre-qualify in March 2005 and succeeded on the basis of its technical and logistical understanding of the project and percentage mark-up. Osborne was appointed to the second stage ahead of Bovis, Kier, ISG InteriorExterior and HBG. “This was a good sign, as they’re not our normal competitors,” says Smith.

At the second stage Osborne worked with Davis Langdon on a cost plan that was tested by tendering some packages. “This was our first big challenge as it showed we were exceeding the budget so we had an intensive period of value engineering which resulted in more than £1m of savings,” Smith says. These included changing the glass partitioning in the offices from double to single glazing and swapping bronze railings, paving and cladding for cast iron. Since starting this job in 2006, Osborne has taken on bigger jobs, the largest to date being a £42m PFI care home in Croydon.