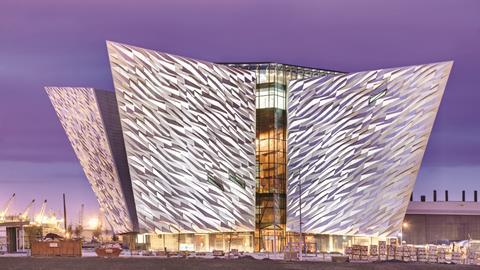 The Titanic museum in Belfast is a striking and poignant memorial to a vessel whose history is intrisically intertwined with that of the city. Ike Ijeh reports

One hundred years ago this weekend one of the deadliest peacetime maritime disasters in history took place, leaving the world’s most famous shipwreck. In the early hours of 15 April 1912, RMS Titanic hit an iceberg in the North Atlantic, and while more than 1,500 people perished, a legend was born. So enduring has this legend proved to be that it is zealously preserved today in books, films, television, music, art, tours, memorabilia, memorials, myths, conspiracies and all manner of popular culture. But architecture has not played much of a role in this cult of commemoration - until now.

Belfast’s £97m Titanic museum, designed by Bluewater shopping centre architect Eric Kuhne Associates and local practice Todd Architects, opened on 31 March. It isn’t the world’s first Titanic museum - the country that endured the second highest rate of casualties after Britain, the United States, already has several, some exhibiting sinister levels of prurient, carnival-inspired oddity. But Belfast’s is certainly the world’s biggest and most ambitious permanent exhibition about the stricken vessel to date. And, as the city where the ship was built, Belfast has the strongest claim to be her true spiritual home. 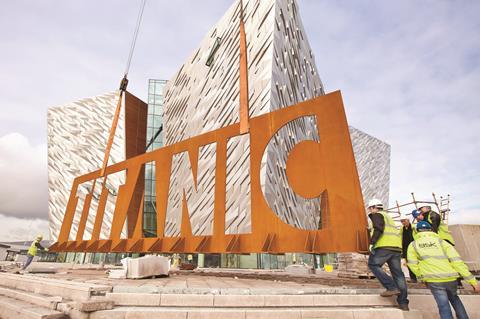 Despite its recent, dark political past, modern Belfast is a dynamic and rapidly expanding city that skilfully plies its tourism fortunes on two elements from its past: shipbuilding and the Titanic. Before the opening of the museum, the latter was principally represented by dozens of trails and tours spread across the city.

The former is invoked by the two gargantuan Harland and Wolff dockyard cranes that are preserved as scheduled monuments and are visible from virtually every corner of the city. These mammoth, yellow gantries, nicknamed “Samson and Goliath” owing to their towering respective heights of 106m and 96m, proudly bear the name of the company that built the Titanic. So it is all the more appropriate that the new museum is located in their wake, at the exact dockside location where the Titanic was built.

The concept behind the museum is simple. Inevitably, it has been designed to resemble the hull of a ship. Not just one, but four - each projecting, prow-like, from the side of the jagged, primarily concealed, glass cube that forms the museum’s centre. Each “hull” soars almost 20m into the air, roughly the same height as the hull of the Titanic itself from waterline to deck.

The conceptual comparison with the Titanic does not stop with form and dimensions - it extends to materials, too. Aside from its thrusting profile, the building’s most recognisable features are the 3,000 silver anodised aluminium panels that are hung on the prows’ facades. Each panel has an asymmetrically chamfered, alternating geometric profile, which creates an abstract, multi-angled surface that relentlessly ripples and contorts like frozen waves across an ocean.

The effect is undeniably visceral - and the incongruous emergence of this glistening metal box amid the sombre Victorian brick warehouses that surround the dock is daring and distinctive. The serrated walls force light and shade to constantly dance across the surface, as if refracted through a prism decorated with millions of twinkling shards of hand-cut crystal. So much so, in fact, that the museum bears a far more striking physical resemblance to the iceberg that hit the Titanic than the hull that enclosed it. 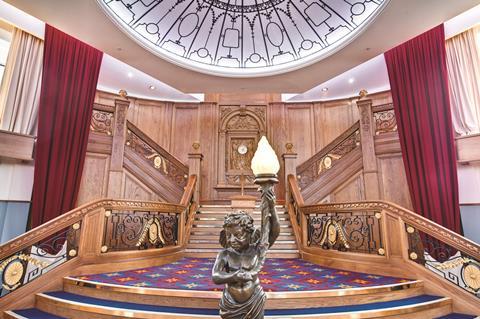 The museum features an extravagant, full-sized replica of the Titanic’s grand staircase

The entrance through a gap between two of the prows is a disappointing affair - a modest, glazed doorway instead of what should have been a violent climactic fissure between the two geological (or naval) monoliths on either side. Once inside, some of the drama of the exterior returns in the plunging, full-height foyer, a twisting, multi-sided vortex spanned with a disorientating array of overhead bridges and escalators. 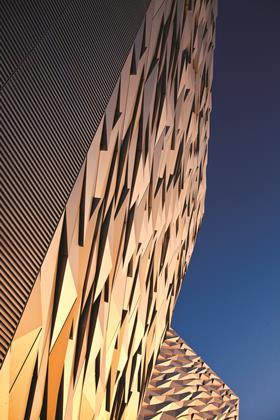 The impact of the space is slightly muted by the proliferation of black finishes, but at least this provides welcome relief from the hegemony of pallid, white interiors that appears to be the default demeanour of contemporary museum or gallery interiors. A precipitous, four-storey sheer wall of artificially oxidised and randomly profiled steel panels also dramatically recalls the fractured terrain of the exterior cladding.

Beyond the foyer, theatrics overwhelms architecture as the building principally mutates into a shell for its exhibits rather than a vessel for design. This is not a museum conceived in the Zaha Hadid spirit of architecture versus artefacts; here, as with a film studio or supermarket, the building is completely subservient to its contents and becomes virtually invisible. The only exceptions are the four gaps between the prows into which judicious views out towards the dockyard where the Titanic was built are offered.

The contents and exhibits are, indeed, fascinating and the visitor is completely immersed in Titanic lore, both real and imagined. Most impressive is a full-sized replica of the ship’s grand staircase, an engorged morass of gilt edging, carved oak and etched crystal. It is a surreal reminder of what the Titanic actually was, above deck at least - a sumptuous, Edwardian country house that happened to float. 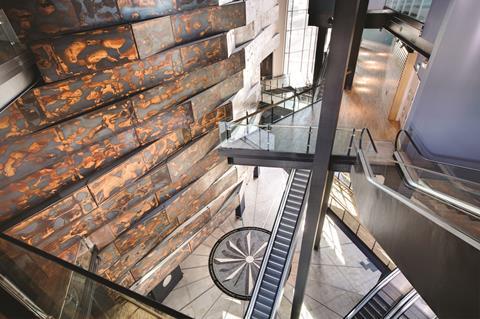 With its gaudy cladding and figurative aesthetics, the museum inevitably lays itself wide open to accusations of theme-park gimmickry and superficiality. And its meticulously contrived exterior certainly emits the faint whiff of simulated theatricality that engulfs Las Vegas hotels. 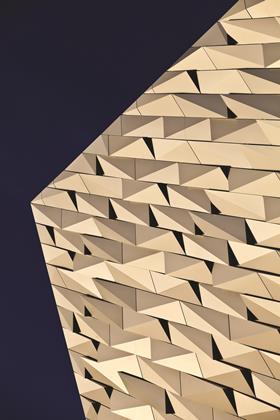 Nevertheless, like Las Vegas, one suspects this museum exists as much to entertain as to enlighten and, if this is indeed the case, then it is more than fitting that its architecture should respond with verve and virility - which it undoubtedly does. Moreover, it forms a belated and instantly recognisable permanent landmark for a city whose emotional connection to one moment in history is as strong as Stratford-upon-Avon’s to Shakespeare or Dallas’ to John F Kennedy.

Ironically, the most stirring and subtle memento to the Titanic may well be found not inside the museum, but just outside it. The building is surrounded by a landscaped new public square, the centre of which it occupies like a giant, beached vessel. Shallow pools of water are cut into the ground underneath the prows, through which spotlights project a spectacular, shimmering, multi-coloured reflection at night.

But at the mouth of the dock just behind the museum, a thin blue line embedded into the ground indicates the full-scale outline of the Titanic’s hull at the exact position where it was built more than a century ago. Like the giant Harland and Wolff cranes nearby, it is a poignant celebration of absence and a powerful reminder of a city’s historic contribution to shipbuilding and, arguably, the greatest vessel to ever set sail.

Despite the museum facades’ abstract, irregular look, its rainscreen system actually comprises just six standard panel types. These are randomly arranged on a standardised setting-out grid to give an impression of infinite variety. Each panel is a 723mm wide by 3mm thick J575 silver anodised aluminium sheet. Lengths vary to a maximum of 4m. Each panel has a diagonally skewered indented profile that projects as much as 280mm from the surface of the frame providing a multi-angled composite surface.

The panels are hung by two slot-joints at either end of their rear surfaces. An additional centre locked mid-span support allows for thermal expansion from left to right. The panels are also “marine closed” and anodised to prevent corrosion, attributes stainless steel would have been unable to provide.

Spanwall’s design director Alan Grimason describes the biggest challenge of the project as “selecting the right product and manufacturing and installing it at cost.” Its success lies in the effectiveness with which it maintains an impression of visual complexity while in fact being based on an eminently simple and practical technical solution. 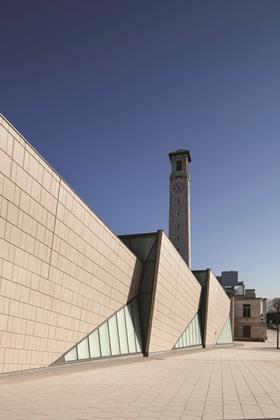 A new museum in Southampton, where the Titanic’s maiden voyage began, also commemorates the centenary of the sinking of the iconic ship. Wilkinson Eyre’s £15m SeaCity Museum focuses on the story of the crew onboard the Titanic and celebrates the city’s proud 2,000-year maritime history.

The museum opened this week and incorporates an extension to and refurbishment of Southampton’s grade-II* listed former Magistrates’ Court Building. A distinctive single-storey pavilion connected to the original building’s north facade via a glazed link houses 2,000m2 of exhibition and learning space.

The building’s sloping, starkly geometric form of three interlocking bays topped with staggered mono-pitch roofs is a response to its irregular site which rises steeply over two metres. Translucent, backlit reinforced glass panels admit daylight into interior spaces. These constitute a triple height light-well spanned by a “gangway” bridge, a continuous red oxide wall beside the entrance lobby and a roof-light offering views of the Webber clock tower - a composition designed to evoke the scale and funnel of the Titanic.