The truth about spending on flood protection

The government claims that flood protection spending is rising, but as the UK towels itself off after yet another deluge, the public is understandably sceptical. So what’s the real story? 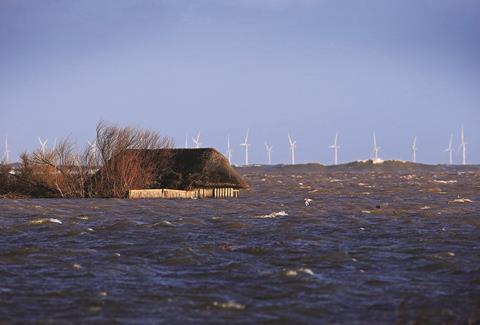 As the floods swept across large swaths of the UK over Christmas, the government recognised a potential PR disaster when it saw one. Within hours of the first homes being breached, members of the government from the prime minister down were out on the streets, doling out commiserations and trying to look like they could offer practical assistance.

Sure enough, the days that followed saw multiple stories appearing in local newspapers, on the television and radio, describing cuts to flood defence works. Without such cuts, the stories proclaimed, disaster could have been averted. But while there is little doubt that cases of pulled funding do exist, the national picture is far more complicated. So what is the truth about capital spending on flood defence works, now and in the future? And what challenges does the government face in ensuring that projects proceed as smoothly and effectively as possible?

In the aftermath of the worst of the floods, Defra minister George Eustice appeared on Radio 4’s Today programme. During a relatively good-natured exchange, he claimed that “when budgets across government are having to be cut, we have maintained spending on flood defence specifically”. He added: “We are going to spend £2.3bn between 2015 and 2021, which will be an increase in real terms” and “the current spending period goes up to 2015 [and] in that period we’ve spent about £2.3bn”.

Similar figures were repeated in an official statement from the department issued to Building. However, it takes a bit of untangling to understand why the same amount of money spent first over four years and then over six is an increase “in real terms”.

To take matters chronologically, between 2007/08 and 2010/11, the last government spent a total of £2.236bn on flood defence works. The equivalent allocation for the current spending period is £2.134bn, which amounts to an overall cut of 4.6%.

So the bare figures would seem to indicate that Eustice was being somewhat economical with the truth on Today. However, according to Defra his sums simply reflect the way in which flood defence spending has changed since the coalition took power. Under the new system, Defra delivery body the Environment Agency (EA) no longer pays the full cost of flood defence works, but instead seeks to attract partner funding from other public and private sector bodies. A Defra spokesperson said that these funds explain the gap between the £2.3bn claimed by Eustice and the official £2.134bn EA allocation - although he declined an invitation to provide further detail. 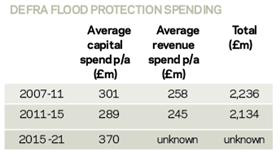 But what about the assertion that £2.3bn over six years is an increase on £2.3bn over four years? This is explained by the fact that the figure for the six years from 2015 refers only to capital spending where previous figures quoted include both capital and revenue spending. Last year, Defra struck a deal with the Association of British Insurers (ABI) whereby in exchange for additional flood defence works, the ABI agreed to cap insurance premiums for homes in areas at risk of flooding (albeit, as the Financial Times revealed last week, around 9,000 homes weren’t included in the agreement). Under the agreement, the government agreed to increase capital spending on flood defence works to £370m a year for the next six years, compared with an average of £298m in the current spending period, which with a guarantee that the figure wouldn’t be eroded by inflation just about gets us to the £2.3bn over six years that Eustice mentioned.

This does beg the question, why didn’t he include the revenue spending? “The revenue budget hasn’t been set,” the Defra spokesperson told Building. That’s no doubt true, but it may be that a recent Environment, Food and Rural Affairs select committee report criticising the depths of staff cuts at the EA was also a factor.

To be fair to the government, no matter how much it commits to flood defence works, it will never be enough to protect every home in the land and to prevent the negative headlines that appeared over Christmas.
According to David Balmforth, senior vice president at the Institution of Civil Engineers: “It will be almost impossible to get an objective view of what is a sensible amount of investment because it’s not a stationary problem. The world is moving both in how we live in the world and also in terms of climate change. And because we don’t have a crystal ball we can’t quantify that future. What I can say is that it isn’t possible or sensible for us to try to protect every single property in every single location for every single eventuality, and it will not be possible in the future.”

That said, there are clearly challenges facing the EA’s current and future programme of works. First of all, the delivery timetable has slipped. Last summer, the EA set a new framework for research and delivery partners - the Water and Environment Management (WEM) framework - following delays caused by problems identified in the procurement process. While hardly disastrous - had the framework been set up on time it would have done nothing to help those households affected over Christmas - the delay was nevertheless unhelpful.

“There was a delay in the process for getting everyone on board, but they got it sorted out by the middle of last year,” says Peter Phipps, head of geomorphology and coastal management at Mott MacDonald, one of the consultants that bid successfully for inclusion on the WEM framework. The company is currently working on a major flood wall project in Clacton, Essex, as well as a comprehensive review of Hartlepool’s sea defences. “I think that generally the release of the projects has been slightly slower than the EA and the suppliers had hoped for,” Phipps adds. “But it seems to be sorting itself out as we move forwards through that framework.”

The move towards the EA acting as just one of a group of investors also presents challenges. Put simply, the agency isn’t used to working in such a co-operative manner and needs time to adapt to the fact that there may be conflicts between the best technical solution for a scheme and the demands placed upon it by other funding partners, whether that be from a regeneration, economic development or heritage perspective, to name just three possibilities.

Then there is the added complexity that multiple partners bring to the basic financial management of a project. Different funding bodies and private companies operate on different financial cycles, so the challenge is to ensure that the money is available for delivery at the appropriate point in a project’s progression. What happens if one of the partners pulls out or simply doesn’t have the funds available at the right time? “There have been a couple of schemes where they were ready to go and there’s been an issue with one of the funders and things haven’t progressed,” says Phipps. “So there is that issue around the partnership funding approach.”

Finally, there is the challenge of simply attracting more public and private funding into the EA’s flood defence pot, with the relatively small amount of alternative funding in the current spending period suggesting that things haven’t got off to a great start. Indeed, asked to name a project on which private capital had been successfully secured, one WEM framework member who preferred not to be named could only come up with one example, and that was still at the planning stage with no funds formally committed as yet. A Defra spokesperson said that “it is still early days”.

However, according to industry experts we shouldn’t expect too much to happen too quickly. “This is a journey,” says Steve Thompsett, director of water and energy environment at Capita, another WEM framework member. “The policy initiatives that kick these things off can take years to embed, so making this work and getting contributions is a challenging thing. It’s also not something that flood risk professionals and the EA have had to do for very long. It’s very much a learning curve. But if you want to deliver more, the money has to come from somewhere.”

The companies and consortiums on the Water and Environment Management framework include:

The online poll originally published with this story is now closed.

We asked: Should the UK government be spending more on flood defences? 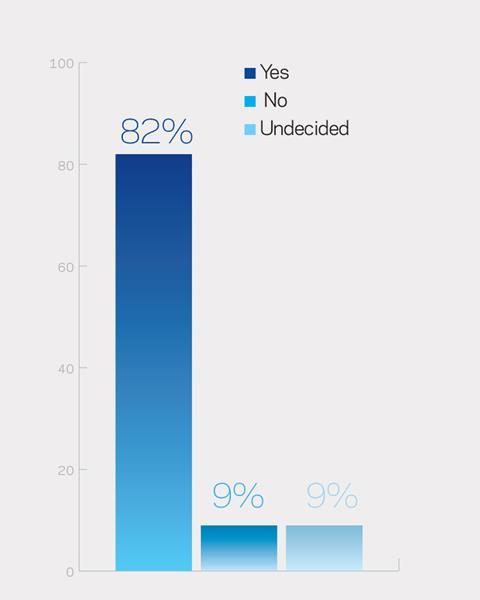